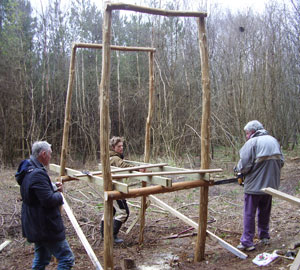 We recently surveyed 149 woodland owners to find out why they bought pieces of woodland, and what they did with them. The full report can be downloaded here but you may be interested in some of the key findings. Unsurprisingly we saw that for the great majority (89%) a love of wildlife was an important factor in buying their wood, as was having a place where they, their family and friends can relax in some solitude (90%), conservation (86%) and to have a source of wood fuel for their own use or sell to others (75%).

As a woodland owner myself, I can relate to all these factors but it’s great to see that my own motivations were similar to those of other owners. Moreover we estimated that woodlands.co.uk owners have over the years planted more than 220,000 new trees, built more than 10,000 dead wood log piles, put up 3,800 nest boxes, dug 350 ponds and installed 350 bee hives. I was particularly pleased to see bee keeping make an appearance as bees need all the help they can get and woods can be a great place to keep hives. 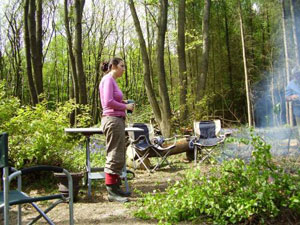 Keen bee keepers Trish and Brian Santos own a wood in Charing, Kent. They have four colonies in their woods and another eight at home, and are battling against repeatedly losing their woodland colonies over the cold winters. Trish says, “It was absolutely heart breaking…but the good news is that four wild swarms moved in to the empty hives. This winter we are going to put them in shelters like the Germans and Belgians do to see if that helps. We bottle their honey and sell it by word of mouth in London and via Godinton House in Ashford”. It’s not just the bees who benefit from their wood though. Recently some local kids smashed the windows in their caravan as "they thought it had been abandoned". Trish and Brian suggested the culprits help them out in the wood and say they have been a great help and learnt about the woods and the products they can make. 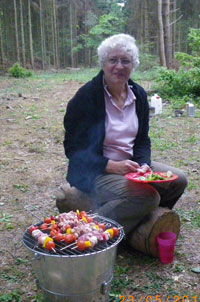 Another woodland owner, Margaret Johnson, lives in the London suburbs (Bromley), but once a week she gets in her van and heads down to her small woodland near Ashford in Kent to relax and enjoy the outdoors. She bought her 10 acres of woodland after she inherited some money from her father. He was a farmer’s son who worked in offices all his life and she found herself thinking that he himself would have liked to have owned a piece of woodland. While it was too late for him, it might be a good thing for Margaret to enjoy during her retirement. She has always liked being outside and keeping busy, and the woodland, together with her allotment, keeps her in touch with the outdoors and with nature.

Margaret is one of the 80% of woodland owners who has no plans to sell her woodland and hopes to one day pass it on to her children. In fact, none of the owners questioned planned to sell their wood and it was clear that they, like me, enjoy being a guardian of their wood(s) and conserving it for generations to come.