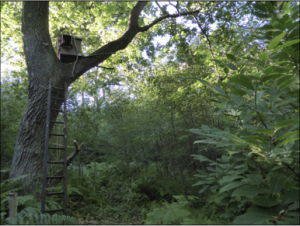 What is it about the owl that is so endearing and compelling – its eyes, its face, its silent mastery of flight, or the web of myths and stories that surrounds its nocturnal life? For sure, nothing can beat staying over in a wood and hearing tawny owls, and even better knowing they count your wood as part of their territory.

When we were getting to know our wood 18 months ago we heard tawny owls, usually some distance away, and the thought struck that a nest box might bring them nearer, and give us the chance of a view. There was the choice of making one from several designs from the internet, or buying a ready made one. We decided on buying from the Barn Owl Trust.

Finding the right spot was not as easy as we thought … undisturbed area, 3 to 4 metres high, clear flight , barn owl trustpath, avoiding west or southwest facing … sounds easy enough until you have to heave an exceedingly heavy and bulky item into a stable position in just the right tree, but we did it.

Tawny owls are fiercely territorial, and take anything up to 50 acres of woodland as their patch. They hunt throughout this area, and when not nesting, choose a wide variety of roosting spots.

In October and November the pair spend more time together, and start to select their nest site. We put up a trail camera adjacent to the box … squirrels, squirrels, squirrels … and then early December success! Over a couple of nights an owl inspects the box.

But clearly it was not to its liking … no more owl, just more squirrels. By March the squirrels had taken it on as a project.

After emptying it of twigs and squirrels several times, we blocked the hole. It was owls or nothing!