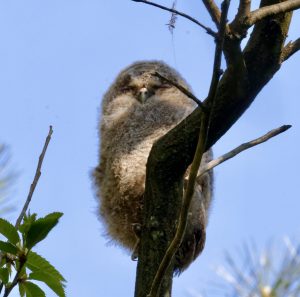 It was in 2018 when I wrote about the pair of Tawny Owls that nested in the crook of the tree in the busiest part of our wood. We believe that one owlet fledged that year. In the autumn of the year before, we had put up a nest box in a quiet part of the wood. The pair of owls had shown some interest, but eventually the box was taken over by squirrels which we regularly evicted. We finally we blocked the entrance for the year – it was owls or nothing.  In 2019, the pair of owls continued to show occasional interest in the box. Also, we assume they nested that season, but where, we don’t know.

In January 2020, we put up a second nest box in a different part of the wood. We were aware that it was too late in the season for the owls to choose it as a nest site, because an established Tawny Owl pair come together again in late autumn to re-establish territorial boundaries and select the site for next season’s nest. However, they would undoubtedly be taking a look and building it into their mental map of the territory. We also hoped this one wouldn’t get so much attention from the squirrels.

During the spring of 2020, the remote camera recorded nothing of any interest happening in and around the box, confirming the point about it being too late in the year. Neither did it pick up any squirrel activity, which was a relief (and surprise). It was only later that we realised the camera wasn’t triggering reliably because, at the beginning of May we checked the box for squirrel activity and there were two well developed owlets playing dead, until one blinked and gave the game away! 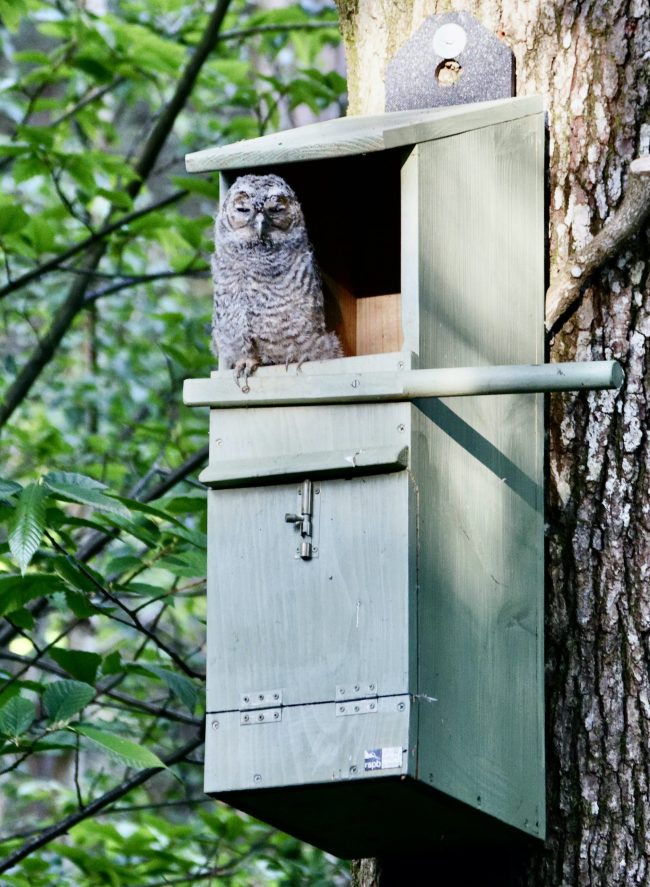 Four days later we returned to find a fine owlet sitting in a nearby tree. It remained nearly motionless for the hour or two that we watched. At about 5.00 pm we returned to see the second owlet sitting in the entrance of the box. That was the last that we saw of them, although we heard the frequent clamouring of owls over the next few weeks.

We have recently moved the original nest box close to the second one, giving the owls a choice of accommodation in their chosen location for next year. The owls have been checking out the boxes briefly but regularly since then. We’ve also kept a careful eye on squirrel activity, having found one of the boxes completely filled with twigs and leaves. We removed drey and they haven’t as yet tried another takeover of either box. 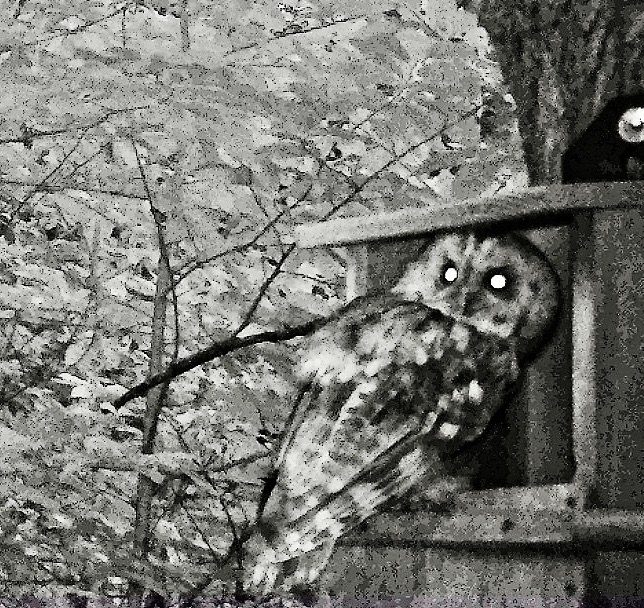 Having pondered the issue of nesting competition between squirrels and owls at some length, and found little helpful information from the literature and internet, we decided on our own solution – provide the squirrels with an irresistible box tailor made for them. This has now been erected close to the two owl nest boxes. All we need do now is watch and wait.

To read the full story: https://woodcockwood.com/tawny-owls-and-nest-boxes/