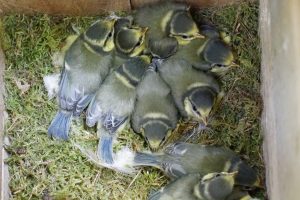 Checking nest boxes is deeply satisfying, and a fitting reward for all the time spent during “lockdown” making and installing a dozen or more new boxes. We now have 27 in the wood - some are specialised such as those designed for Treecreepers, some for large birds like our two Tawny Owl boxes, but most are standard boxes designed for the tit family.

Checking the Boxes: There’s a strong feeling of anticipation when you lift the lid of the Blue and Great Tit boxes. Sometimes the adult is there and stays steadfastly put, or sometimes off she goes, revealing what? - a beautiful clutch of eggs, a huddle of chicks (featured image). 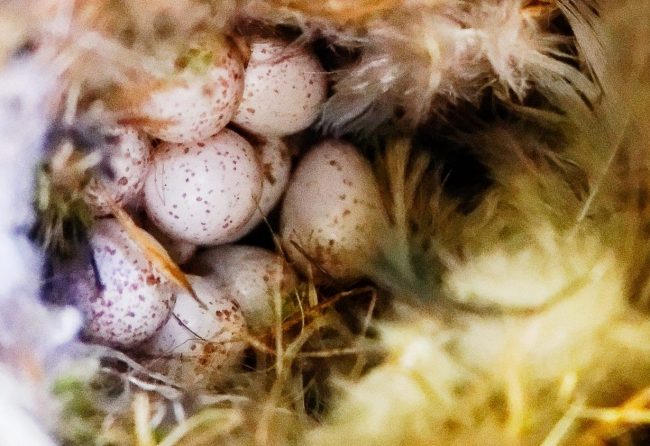 On one occasion when I lifted the roof off a box, the complete brood of eight young Great Tits left the box as one, and within seconds disappeared into the tree canopy. Who was more shocked I’m not sure, but at least we had an accurate record of their fledging time, and they didn’t have to madly scramble through a small hole for their first taste of the world.

It isn’t our intention to disturb the birds, but we keep a record of species, and their nesting attempts and outcomes for the BTO nest record scheme . We checked each box three times during May. This covers the first and most important nesting period for the Tits. During this time the young are fed on the oak leaf caterpillars that are emerging by their thousand. Later broods will not be privilege to such a bounty, and are less successful.

Soon I’ll be checking the boxes again for second broods.

The Nuthatches: Our big disappoint this year is the missing Nuthatch pair. The two Nuthatch boxes were the first to go up in Woodcock Wood, and we’ve had them nesting every year in one or the other.  See: https://woodcockwood.com/spring-diet-of-the-eurasian-nuthatch/ 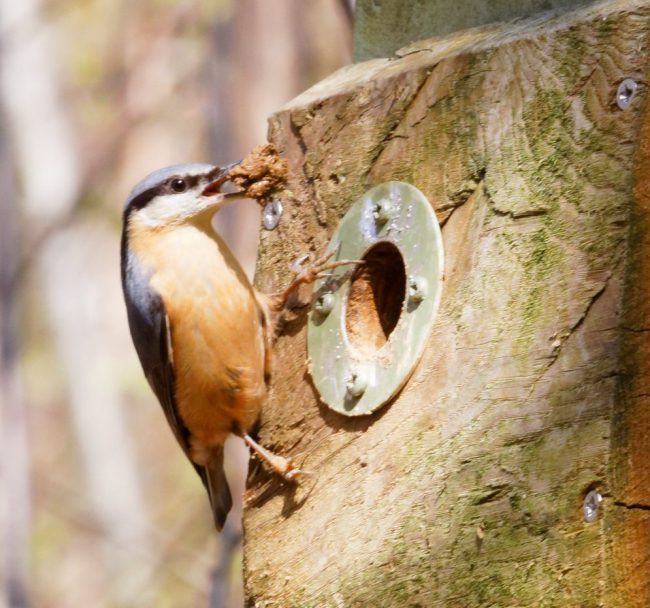 This year began well. We saw the female applying mud to the entrance hole in February, and at that time the pair were as busy and noisy as ever. In March however, things changed. There followed a long period when a single bird was present, calling constantly in its territory close to the two boxes, but not visiting either. (Great Tits took up residence in the two boxes, and were no doubt delighted with the spacious accommodation.)

Clearly, one of the pair had died, probably the female, and the constant calling was from the male that remained in his territory, attempting to attract a new mate. Had it been the other way round, the female would have likely moved off in search of a mate.

As the season progressed, we heard less and less of the male, and haven’t seen a Nuthatch for several weeks in our part of the wood. Fingers crossed that a new pair will adopt the territory as they are such characterful and energetic birds to have around.

Treecreepers: We occasionally see Treecreepers on the oaks in the wood. They aren’t uncommon birds, but difficult to see with their beautifully cryptic plumage and mouse-like behaviour as they search for insects and larvae in the tree bark. 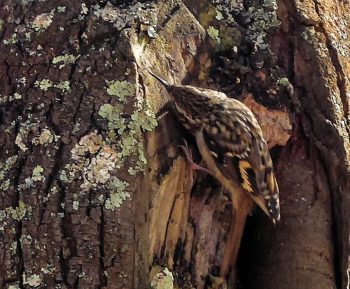 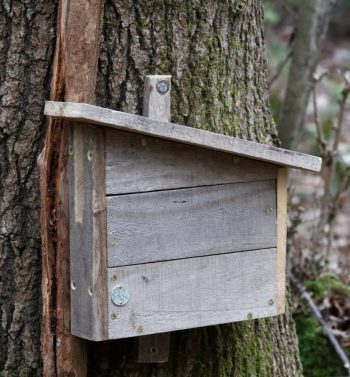 They nest in narrow crevices behind loose bark fairly close to the ground. Using a nest box design by David Francis that mimics their natural nesting sites, we’ve put up five boxes that should be the ideal “des res” for Treecreepers. See: https://woodcockwood.com/treecreepers-nesting-and-nest-boxes/.

The boxes went up on February. We didn’t expect success this season, and there have been no takers. Hopefully one of the boxes will be discovered and earmarked for use next year.

The Tawny Owl Boxes: As you will know from our last blog, the Tawny Owls abandoned their two boxes in preference for a natural site high in the nearby pines. Others were keen to take advantage. Inevitably the squirrels were constantly filling the boxes with twigs and leaves. We spent much time emptying them, but annoyingly they won the day, and eventually we found two tiny squirrels snuggled in one of the boxes …. hmmm, I left them to it.

For a time, the other box became a focus for conflict between a pair of Stock Doves and squirrels. We saw a lot of squabbling over the course of a couple of weeks, but in the end the Stock Doves settled in and raised two young. 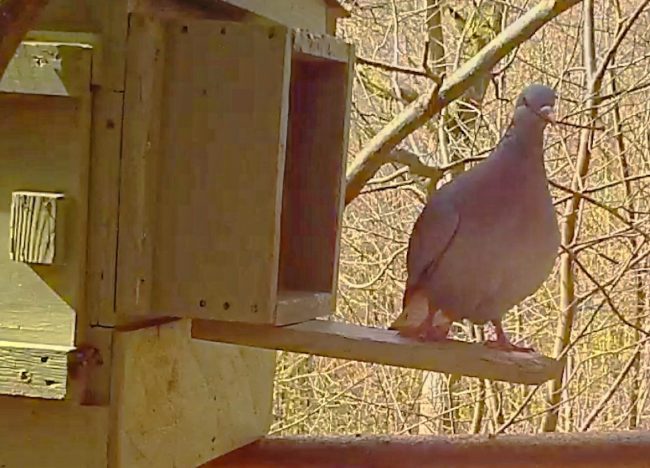 I checked the box to watch their progress, and confess it wasn’t a wonderfully pleasant experience. Compared to the impeccably neat bowls of moss and feather of the tit nests, the doves reared their young in rather squalid conditions. The smell when I opened the door was foul to say the least as I peered in at the two rather scrawny looking chicks. They were a far cry from the fine-looking adults, but were certainly preferable to another pair of squirrels, and on reflection, I suppose they had a certain charm.

… and finally the Buzzards: We spent many hours during the winter tracking down the numerous Buzzard nests in the pines. Although the nests are large, they can be difficult to spot, and after much searching, we identified eleven.   The Buzzards will use these interchangeably year after year, occasionally adding another nest as their inclination takes them. 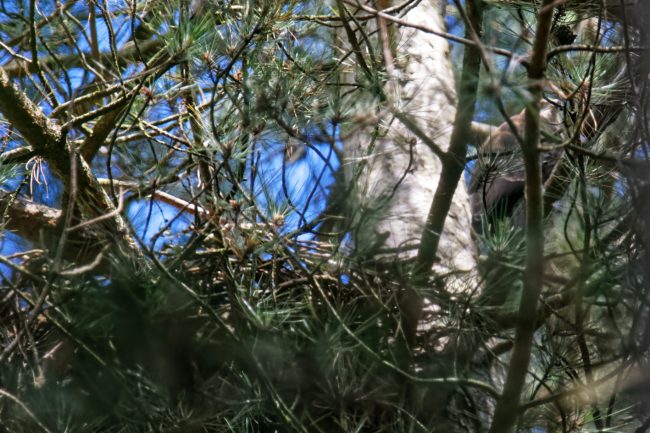 The trick then is to predict which one they will choose for this season, again not as easy as it sounds. They can be quiet and secretive birds when at the nest. And when the female is sitting on eggs she will remain deep in the large nest, and there will be very little to give away her presence: see https://woodcockwood.com/finding-active-buzzard-nests/. But there are clues you can use, especially during the pre-nesting season when the male will sometimes add dramatic dives towards the nest to his amazing display. 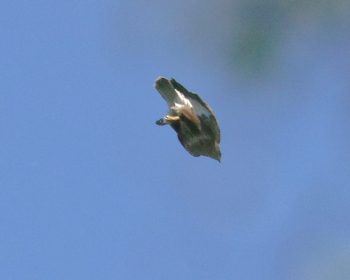 This year’s nest is far more difficult to observe than last year’s, as you can see from the picture of the female guarding the nest. We have only seen one chick so far. There could well be a second, and if so, it will soon become evident as the youngsters grow. But the wet June weather of 2021 isn’t ideal for the male to hunt, and food supply will determine how many chicks do survive.   Watching the progress of the Buzzards will keep us busy until the autumn, when the young will eventually depart from the territory and start a period of wandering. It may be two to three years before they eventually settle in a territory of their own.