You are here: Home > Blog > Flora & Fauna > Buzzards at the Nest : More on birds from Woodcock Wood

Buzzards at the Nest : More on birds from Woodcock Wood ~ by Chris Saunders 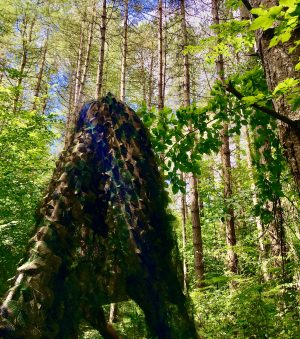 In an established territory the Common Buzzard is likely to have several nests which they will use interchangeably. Over the last two or three years of watching the pair over Woodcock Wood we decided to make an effort to find their nest. By the end of June we had located five nests, including their current one, high in the confines of Corsican Pines, and surprisingly close together.

We set up a small hide (featured image). The height of the nest meant an excruciating position for body and camera over many hours, and the position of the sun meant mornings only for photos.  Over the next three weeks, we spent many hours watching the activity around the nest.   Initially we were able to confirm there were two chicks which we estimated were about 30 to 35 days old. The female remained deep in the nest for much of the time, and was reliant entirely on the male.

At this stage her role is care of the young and defence of the nest against crows and other predators. She is a larger and stronger bird than the male, but he is the more agile of the two, and usually a more proficient hunter. His time at the nest is brief, a matter of seconds in fact. He delivers the food and the female dismembers it and feeds it to the chicks. 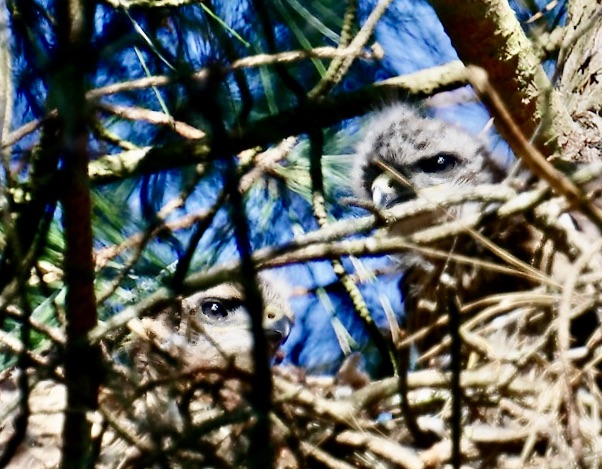 Five days later and the female was spending most of the time perched at various vantage points within a few metres of the nest. When we eventually saw a chick it had developed considerably and had lost most of the white down from its head. Its body plumage was well developed, and it was now actively climbing and stretching its wings and was quite vocal at times.

However, at the end of ten hours of watching, there had been no sign of a second chick, and we had to conclude the second had gone. No doubt a shortage of food coming into the nest would mean hunger setting in, driving the older sibling to harass and peck the younger until it succumbed from weakness and injury ... and yes it was also likely to have been eaten with help from the adult.

It is difficult not to be emotional about the birds we are watching. We want to see the best outcome, as defined in our terms. To realise that one chick was now missing was somehow upsetting. But to the buzzard this isn't the case. If the female can dismember and feed her second born chick to her first born, we have to dismiss the idea of close emotional bonding between adult and off-spring. Their life is basically about survival.

Four days later, with the surviving chick about 45 days old, it was difficult to distinguish between the chick and the adult just by appearance (although this shot does show the plumage differences well enough to identify the young one as the bird on the right). 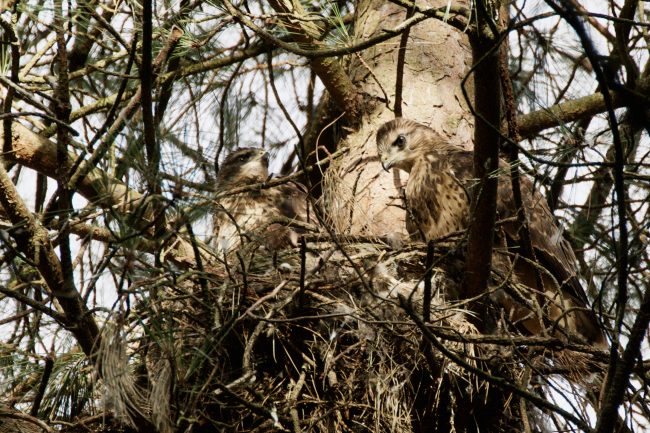 The one easy distinguishing feature was the seemingly constant plaintive calls from the young one.   The female spent little time at the nest, but maintained a watchful presence from close by. During late afternoon the young one appeared on the edge of the nest, and from the way it was tugging and pulling, it had a sizeable carcass in the nest. It was good to know it had something substantial to eat.

The young one left the nest by stages – first climbing to near-by branches, and back to the nest, and then short flights to trees close by.   By mid-July the young bird was only visiting the nest to feed. It was now flying between trees, but still calling plaintively while perched. In spite of the calls it was now difficult to find the bird. It remained well hidden in the upper branches of the pines, and moved around quite a bit.

It may be sometime before we see all three free flying together in the open sky.  The young bird is likely to stay with its parents until late September. 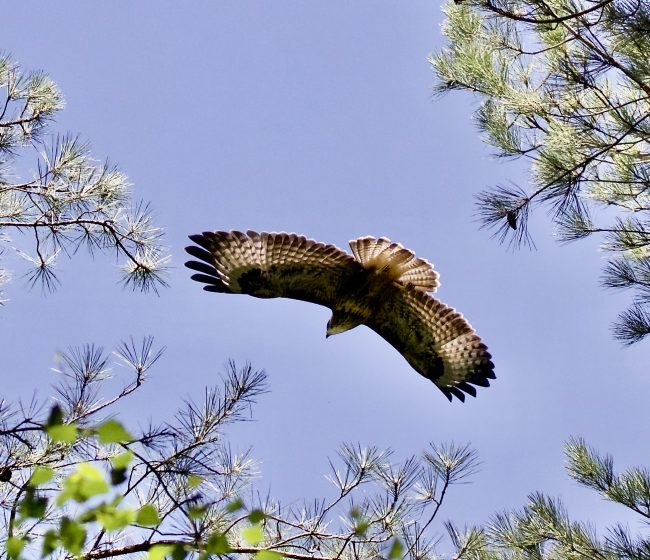 Between now and then the parents will continue to feed it, but it will be learning to hunt for itself. It will then leave the territory, perhaps join other juveniles for a time, and begin the search for a territory of its own, be this a new site, or more likely replacing an adult of an existing pair that has died.   For the full story visit : https://woodcockwood.com/buzzards-at-the-nest/