More on birds from Woodcock Wood : The Long-tailed Tit – a very sociable bird 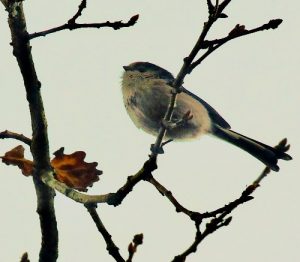 The Long-tailed Tit is a relatively common bird. In 2020 they made it into the top ten of the RSPB's annual garden bird watch, though they are more a bird of woodlands than gardens.    Outside of the breeding season they spend their time in small family groups of about 10 birds. Female young tend to move away to join other groups. The groups are territorial and maintain extensive territories, often 20 to 30 acres or more.   The groups form tight winter roosts – sometimes in tight rows along a branch, or in small huddles, with the more dominant birds in the centre. These huddles help to maintain their body temperatures, and are critical for such small birds during cold spells.

The recent mild winters have contributed significantly to their winter survival rate and probably account for why they are now high on the garden watch bird count.   Over the last three years we have occasionally seen them in Woodcock Wood. They are unmistakable - small and round with long tails moving energetically from tree to tree in search of insects and larvae, which form the main part of their diet throughout the year. They aren't easy to photograph because they seem to be constantly on the move, searching one tree and off to the next.

In March of this year it was great to spot a pair building a nest, albeit about 20 metres up in the crook of an oak bough. They may have been a long way up, but at least they were focussed on one place.   They choose from a wide variety of site locations. They regularly nest high up in oak and ash in the fork of large boughs, like ours. The nests will be camouflaged with lichen to match the growth on the tree bark. They occasionally choose conifers, or they will choose to nest low to the ground, in blackthorn or deep in brambles. Also, if a pair need to build more than one nest in a season, because of first nest failure, they don't necessarily choose the same type of site.

The day we were at the wood watching them build, they had completed the main structure of the nest, and were at the stage of lining it with feathers. The pair would both disappear into the wood, and in a short time return with a large feather or two. One would enter with a feather, and the other pass its feather to the bird in the nest. They did this time and again over the course of the day. 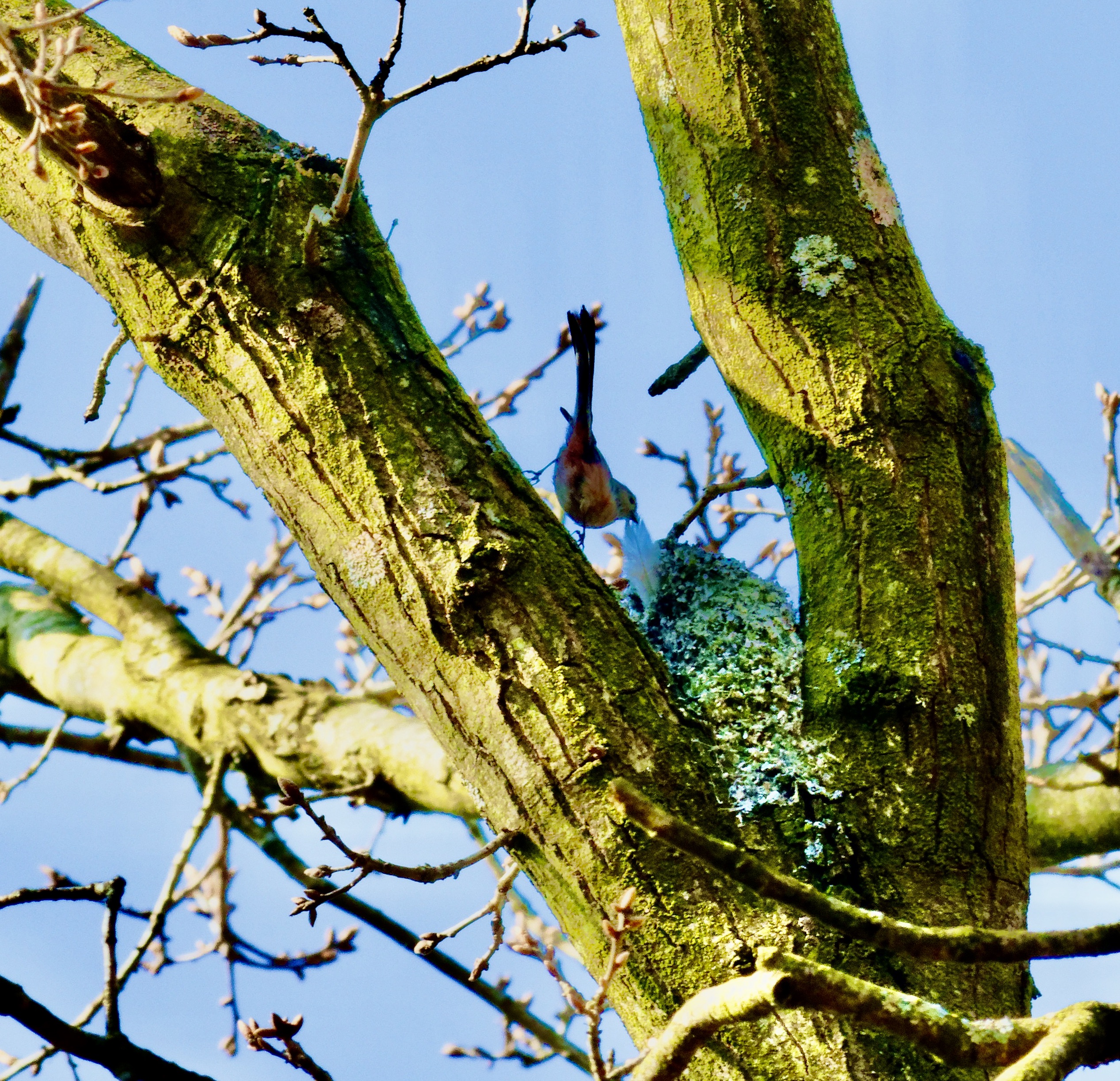 Their nests are beautiful creations and totally fit for purpose. Constructed of moss, lined with hundreds of feathers, and bound on the outside with spiders web to provide huge strength and elasticity.  There can be more than 2,000 feathers in a single nest, and the insulation value is enormous - a very high tog rating! 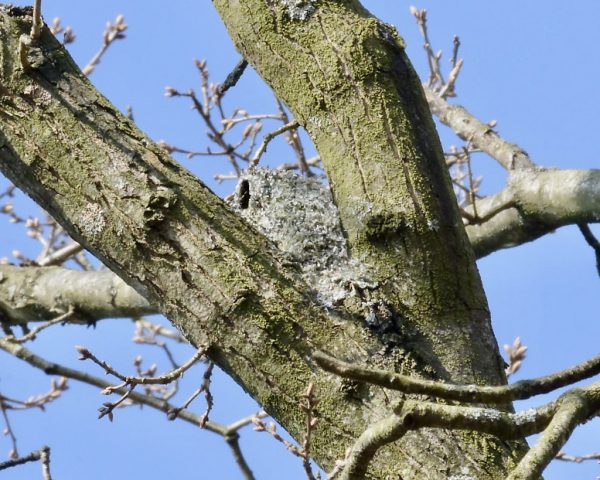 We visited the wood about a week later. The nest was intact, and although we watched it frequently over the course of the day, we saw no activity at the nest. By the end of the day we assumed it has been abandoned. Whether or not this was the case we won't know, but on our next visit the nest was hanging forlornly from the tree - a sad end to a beautiful creation.   If the nest fails, which they frequently do, individual birds may nest again. If not, one of the birds, usually the male, may end up assisting in the rearing of young of a pair that are closely related to the helper.

This is an extract of a longer article on our own birding website: www.woodcockwood.com.

Thank you for an interesting article. I didn’t know about the roosting behaviour.

hi in winton estate i frequently saw large groups pf ltt of about12 to 4 who raided and took over the fat ball feeder . it was an amazing frenetic attack lasting about five minutes then they were off again . the swarmed in like a swarm of bees twice a day , loved seeing them they are in class of there own .