Solar panels in woodlands and fields  – are they good or bad for the environment? 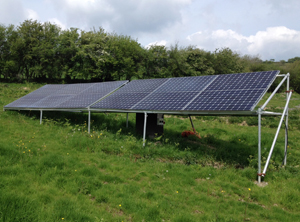 Several woodland owners have put solar panels in clearings or next to their woodlands and they wonder what effect these man-made structures have on nature.  There is also general discussion as to whether open field solar arrays (or solar parks) are good or bad for wildlife.  Of course, in the big scheme of things - renewable energy is certainly good for the wider environment to the extent that it reduces carbon emissions by substituting green energy for fossil-fuel-based electricity.

It now seems that many of the earlier fears about the impact of solar panels were unfounded.  They don't seem to create a water-like surface which attracts aquatic invertebrates away from water and they don't seem to lead bats and birds to crash into the shiny surfaces mistaking these for water.  The research suggests that birds and bats see panels as they would other flat surfaces that we introduce into the environment such as glass or concrete in buildings. 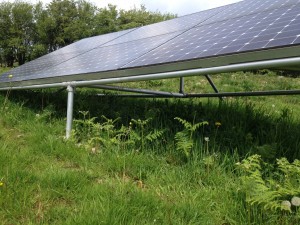 Aside from the findings that solar panels seem not to cause damage to small animals, they do have some biodiversity benefits in that they create micro-climates underneath the arrays; and, in practice, a herb layer builds up below the panels.  This allows a variety of pant growth and creates shelter for invertebrates, small mammals and reptiles.  In some solar parks, the grass is grazed by sheep which avoids vegetation growing over the panels.  Even here there are still plenty of sections which the sheep don't graze, so that biodiversity is much increased (compared to use of the land as an arable field).  Panels are less than 20% efficient and there are many gaps between them so that a solar park can also be a sheep grazing area and something of a nature reserve.  Sheep seem to like using the panels for shelter from wind and rain. 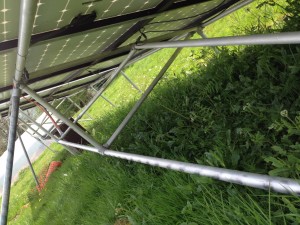 In the future, tensions may emerge if owners of solar parks decide they want to kill the grass by spraying it or if new panels are developed which cover more of the ground and are in effect three-dimensional.  These panels, which are now under development, are much more efficient than the flat surfaces which are currently used: they allow the light into a prism and the energy is absorbed as the light bounces around inside.  In principle, these new 3-D panels might be developed so that the area underneath becomes very dark. like the floor of an unthinned conifer forest, where there is much reduced plant and animal life.  But for now, using today's technology and practices, solar panels seem to be fairly positive for biodiversity. 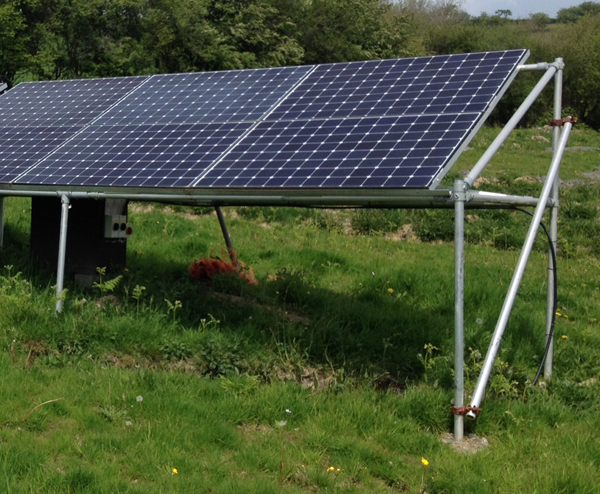 Part of a solar panel array 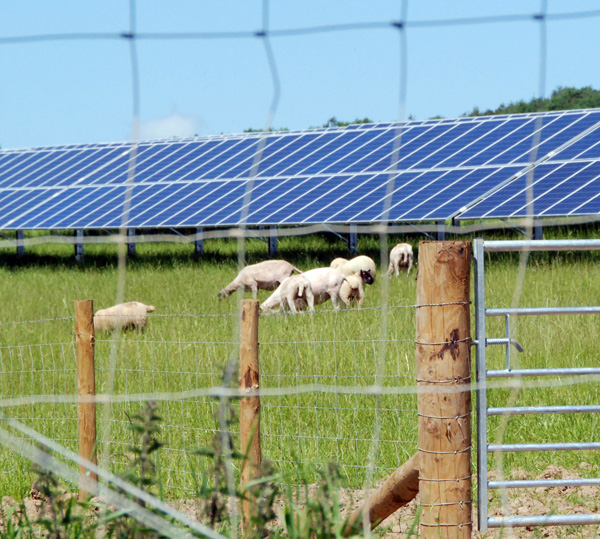 In response to Jane White…

The 20 year figure you quoted is factually utterly incorrect. Please see below…

Surely the best place for solar panels is on roofs – whether that’s the roofs of houses or of agricultural/forestry outbuildings. Solar panels obscuring land which would otherwise be growing crops (including pasture or timber) makes little sense to me when there are plenty of structures with south-ish-facing roofs available.

In Germany there is a major push for renewable energy, Establishing wind turbines in the forest has been hotly debated. Large areas of clear felling have to be undertaken to stand the cranes needed to be erected the mast, access tracks have to be widen especially at junctions to move 30 m + blades around. If anybody comes up with the idea in the UK of putting up wind turbines in wood land. “forget it” The only place it could be practical is after clear felling a conifer wood land. (this is large forests stuff). You also need to hook these things up to the Grid. I’m sure the FC have consider it? Better to wait until some one wants to “frack” under your litte bit of England land! (won’t be long)

Anything that produces electricity will emit EMF’s. The wires/inverters/battery will be mostly responsible unless protected by faraday cages and steel conduit & the panels will degrade over about 20 years (silicon). The smart meter will produce a HUGE amount of continuously spikey radiomicrowaves, said to be many times greater than a mobile. Read http://www.stopsmartmeters.org.uk. EMF’s and radio waves are harmful to all living things.

hoping one day to be owner of woodlands somewhere in east Anglia.. question ? to what purpose are people installing solar panels in small pockets of woodlands, is it for their
own use when they are on the land? or is the power being sold back in The Grid?

I would like to say first, I am pro solar panels and renewable energy and think the use of them in large arrays in fields or small arrays in woodland as described should be encouraged.

In our latitude, the solar panels need to be placed at an angle as the sun is not overhead during most of the year, and will have spaces between the rows to prevent shadows from one row falling on another, so the amount of light available to plants is unlikely to change with future solar panel technologies.

Paragraph 3, sentence 2: “This allows a variety of pant growth”