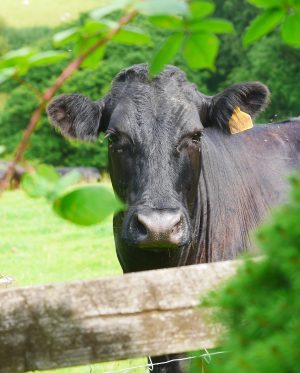 Methane might be a clean fossil fuel when in a pipeline but it is second only to carbon dioxide in terms of contributing to global warming, when present in the atmosphere.  Over the last two centuries, the level of methane in the atmosphere has increased dramatically (and now stands at approximately 1800 parts per billion). Much of this increase has been linked to certain agricultural practices (farming of cattle and other ruminants, paddy fields) plus the emissions from decomposing landfill etc.

However, recent work in a number of forested and woodland areas (for example, The Amazon, Borneo, China, Hungary etc) has suggested that the release of methane by trees is significant, and given that methane is an extremely potent greenhouse gas - this has to be considered in relation to climate change.  The methane contribution from  trees has not really been considered when working out the global methane budget but it now seems that they make a contribution.

The methane emission by a single tree might be small but world-wide there are billions of trees.  A paper published in The New Phytologist entitled “Methane production and emissions in trees and forests” by Kristofer R. Covey & J. Patrick Megonigal addresses this issue.  It had been thought that the action of soil microbes (methanotrophs) particularly in upland woodlands and forests in removing methane from the air would offset some methane production but this may not be the case.   Covey has also described situations where similar trees in similar soils have a fifty-fold difference in methane emissions; the situation is variable! 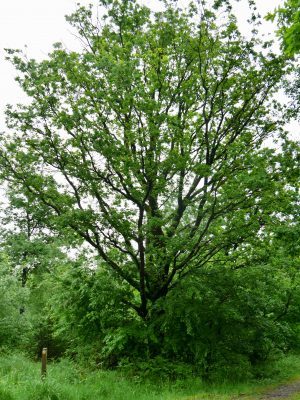 In the past measurements of methane flux were frequently done at soil level.  However, it is now known that methane can be released from various surfaces of a tree. Professor Vincent Gauci of the Open University has been working on methane release in woodlands /  forests. He and other scientists have found trees produce their own methane (and are not just acting as a conduit for the release of methane from the soil).  Methane can come from microbes in the heartwood of the trunk and / or other tissues.   But recent work has shown that a photochemical reaction, probably driven by the U.V wavelengths in sunlight is capable of producing methane.  This production of methane by trees is known as abiotic aerobic methanogenesis.  It may be that it involves reactive oxygen species (such as peroxide or superoxide) inter-acting with pectin, lignin or other complex polymers.  This production of methane has been associated with various stressors - such as the wounding of tissue, high temperature, drought and infection.

The methane emissions from trees measured in some regions are seemingly enormous. A Lancaster University team estimated that the trees in seasonally flooded forests of the Amazon produced between 14 and 25 million metric tons of methane annually—an amount not dis-similar to methane release from the Arctic tundra.  This is perhaps not surprising given the wet, water- logged nature of the soils; ideal for many methane-generating bacteria. Other studies have found trees generating substantial amounts of methane even in dry upland ecosystems.

Interestingly some of this work was on cottonwoods and it takes us ‘full circle’.  Over a hundred years ago, a chemistry professor (Francis Bushong) in Kansas reported an observation that he had made; he noted that when he had cut down some cottontrees that the sap that exuded from the trunks ’bubbled’ and that he could ignite these bubbles.  The bubbles produce a blue flame on ignition.  Back at his laboratory, he discovered that the bubbles contained methane and in some cases the methane reached  65% or more of the total stem gas*. Rather like Gregor Mendel’s work on the genetics of peas, his observations lapsed into relative obscurity for some years.

* Bushong FW. 1907. Composition of gas from cottonwood trees. Transactions of the Kansas Academy of Science 21: 53