You are here: Home > Blog > Community use > "This Land is our land" – The Land Magazine

"This Land is our land" – The Land Magazine ~ by Angus 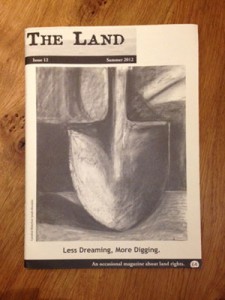 British politicians almost never discuss issues around land use and land ownership.  "The Land" is a magazine which breaks that taboo and is dedicated to land issues and to getting people more involved in active management of the countryside/land.  Based in Bridport in Dorset, the magazine is a low cost, high quality publication that comes out a couple of times a year.  I always look forward to getting my copy and think it's an absolute bargain at £5 per copy including postage - for 72 pages of thought-provoking pieces.  If you want to economise, though, you can read the material at: www.thelandmagazine.org.uk

The Land Magazine has discussions on big issues of land ownership, access and land use, but it is also full of practical articles such as Cathy Ashley's article on the practicalities of buying land and "why solicitors might be useful after all".  On the more political side there are articles supporting small scale and organic agriculture - one of them envisages a world where labelling is reversed - the "chemical-mongers" would have to alert food buyers to their activities with the default assumption that unlabelled packets mean that food is organic.

The group who put together The Land Magazine work as a team (Simon Fairlie, Gill Barron, Ed Hamer and Mike Hannis) and they have a clear ethos: it is written for people who believe that "the roots of justice, freedom, social security and democracy lie not so much in access to money or the ballot box, as in access to land and its resources." Strong stuff, but they also want to encourage debate and whilst not all their authors agree on everything they do generally support the movement called "The Land Is Ours" - meaning that they "campaign peacefully for access to land, it's resources and the decision making processes affecting them, for everyone.." 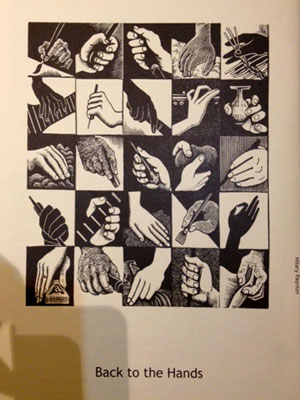 My favourite article is by Lynn Miller who founded the US Small Farmers' Journal in which he explains "cultural activism" and the cultural advantages of small scale farming somewhat as people in the UK have spoken of small scale forestry.  It is an article written in short sentences.  Often very short. He says small farmers will farm organically whereas large farms will pretend to do so. Even then only if it's profitable.  Miller asks: "do we want our farms to be factories or churches?" - farming, he says, works best as part craft, part mystery.    There is also a great book review by Gill Barron on "The Flowering spanner" which is almost a follow-on from "Zen and the art of motorcycle maintenance" where quality and excellence are pursued, as is the skill of doing practical things.  "We need a world which accords due respect to a variety of ways of learning, and working, and attaining excellence.... bring back working with hand tools", begs Gill Barron.

As a black-and-white only magazine the illustrations are eye-catching and enchanting - they include photos, cartoons, drawings and woodcuts - the "back to the hands" pictured above left, by distinguished wood engraver Hilary Paynter, encapsulates a hands-on, small scale approach to land management, whether farming or forestry.  The magazine also has news of planning applications such as those in relation to the Lammas scheme in Wales (another woodlands.co.uk blog post describes this) or the application by Pete and Anna Gudgeon at Henson's wood to build a timber-clad house in connection with their charcoal business.

Posted in: Community use, Energy, sustainability & economics ~ On: 4 February, 2013