Another threat to bees – the Asian hornet.

There is a now a species alert for the Asian or Yellow legged hornet (Vespa velutina nigrithorax). It is an invasive, non-native species from Asia.  It feeds on honey bees and other beneficial insects such as hover flies and bumble bees.  The hornet hovers outside bee hives, waiting to catch and then kill bees as they return from foraging. It can cause significant losses to bee colonies / hives.

Indeed Professor Matt Keeling has predicted that if nests of the asian hornet are left to thrive in the U.K. then within two decades British populations of honey bees will be at risk.

The asian hornet arrived in France in 2004 (through an import of Chinese pottery) and it spread rapidly. It is now to be found in Italy, Spain, Portugal, Switzerland, Belgium and Germany. The National Bee Unit confirmed a sighting of the Asian hornet in the Tetbury area of Gloucestershire in September 2016 - this was the first time that the hornet has been reported in the UK.  This hornet is most likely to be found in southern parts of England or it could be amongst imported goods (such as soil with imported pot plants, cut flowers, fruit and timber).

The asian or yellow legged hornet is smaller than the native hornet, with adult workers measuring about 25 millimetres (one inch) in length, and queens measuring 30 millimetres. Its abdomen is mostly black except for its fourth segment of the abdomen, which has a yellow band located towards the rear. The hornet has yellow legs, and the face is orange - with two brownish red compound eyes.

or using the online recording form

You can also email the Centre for Ecology and Hydrology if you have a sighting.

A confirmed hornet sighting will trigger an eradication plan by the National Bee Unit.

Do not under any circumstances disturb or provoke an active hornets’ nest.

Further information about the Asian Hornet can be found in the following links :

Guidance for bee keepers: can be found on BeeBase.

[The image of the hornet above is courtesy of Jean Haxaire]

Even hover flies may be at risk 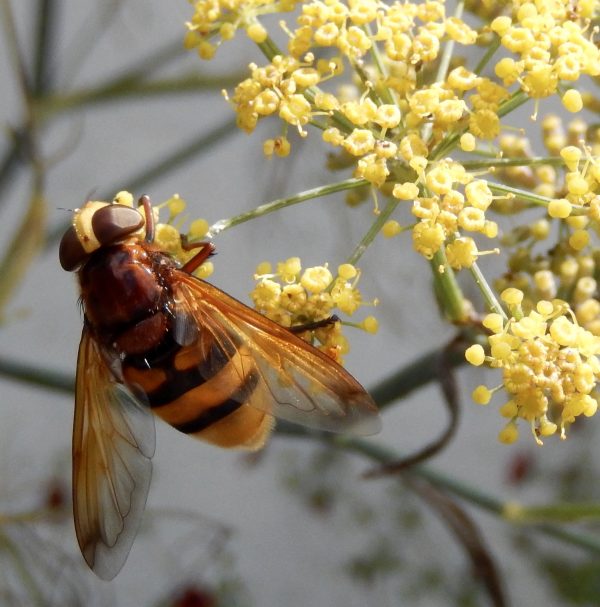