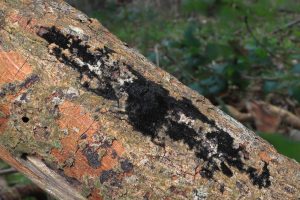 In my last post I wrote about inconspicuous ascomycetes – the kind of tiny species that hide in plain site, manifesting themselves as little black dots on dead plant matter such as woody stems. This time, I want to zero in on a species that is not quite so inconspicuous and which grows on dead deciduous wood. After spotting it for the first time this year, it then started popping up everywhere in my local woods and beyond. I’ve found it in three different sites over the past few weeks alone. And not only me, as I’ve seen numerous postings in various online mycological interest groups by people who’d stumbled across it just as perplexed as I initially was. Who knows, perhaps the conditions have been particular good for it this year, or perhaps it’s always been around and I’ve just never noticed it.

It’s name is Chaetosphaerella phaeostroma, and though it doesn’t have a common name in English, I’d argue it probably should do, as it is a fairly distinctive species. From a distance, it manifests itself as black fuzzy patches. Up close however, one notices that nestling amongst the felty patches of hairs are dozens of tiny slightly rough textured dark bluey-grey to black spheres up to 0.5mm in diameter. 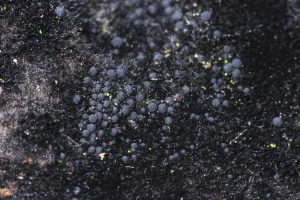 These are the perithecia of this pyrenomycetous ascomycetes  – if you didn’t read last months post, these are the hard black spherical flasks that hold the asci sacs that in turn hold and release its spores of this particular group. Looking closely, you can see the top of many of them have broken away, like the tops of Easter eggs.

There are many, many fungi species that consists of groups of tiny spherical perithecia like this (to name but a few, there are the various species in the genuses of Nischkia, Ruzenia and Rosellinia, if you care to Google them). But Chaetosphaerella phaeostroma is distinguishable from these due to the coarsely hairy mat its perithecia are immersed in, known as the ‘subiculum’ (defined as the net, felt, or crust-like growth that covers a substrate formed by a mat of hyphae from which fruiting bodies emerge). In fact, there was a time when scientists believe this was two separate species, the orb-like perithecia being one of them, the hairy subiculum being another. 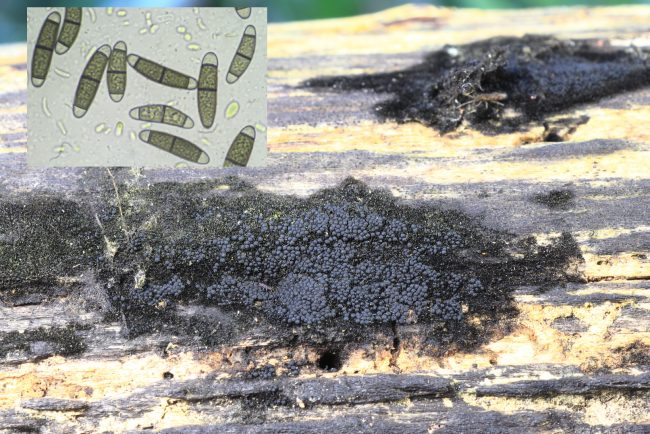 Fungi are complex organisms that constantly seem intent on thwarting those whose attention they attract. So it’s perhaps no surprise to find out that there is actually another species, Acanthonitsckea tristis, that looks superficially much the same as Chaetosphaerella phaeostroma. Whether it is more or less prevalent in the UK, I don’t know, but as ever, the way to tell them apart is through microscopic examination of the spores – the fungi in focus has relatively large (20-25x6-9 microns) banana-shaped ones that are segmented into four with the end segments lighter than the middle two;  Acanthonitsckea tristis has much smaller single-celled ones about 6-9x1.5-2 microns. 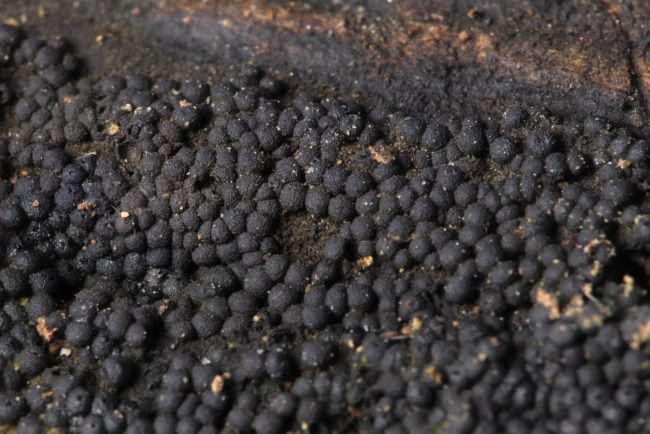 No hairy subiculum and totally different spores point towards an entirely different genus of Nitschkia for this otherwise very similar looking specimen.

I duly set about looking for the evidence, laying my find, after removing it from the wood with a penknife, facedown on a microscope slide overnight. The next day, I put the slide under the microscope and found thin curved ones, about 10x2 microns, which fit neither species. I was perplexed for a while, until the ever-helpful Emma Williams of the British Mycological Society pointed out that not only did the spores look more like those of the Common Tarcrust (Diatrype stigma), which I covered in some detail a few years back, or those of a number of other species in the related Eutypa genus, but that Chaetosphaerella phaeostroma doesn’t actually grow on dead deciduous wood, but parasitises these Diatrype and Eutypa species. I had stray spores. 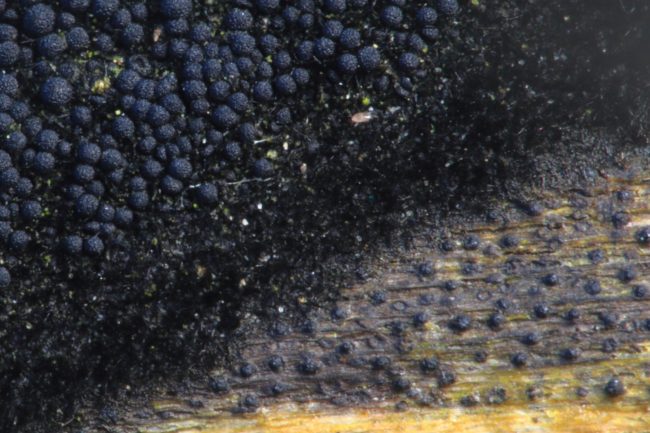 In the top left of this picture you can see Chaetosphaerella phaeostroma growing as a parasite on its host in the bottom right, a member of the Eutypa genus.

And so I went back to break open the tiny perithecia and tried to ease a new batch of spores out. I was relieved that these did indeed perfectly match the large segmented spores of the Chaetosphaerella phaeostroma I thought I’d discovered. A closer inspection of the original photos also showed that beneath the margins of the felty subiculum, one could see the distinctive pimples of a Eutypa species upon which this was growing.

Whereas the Common Tarcrust is fairly easy to identify, the various Eutypa species are not so much. Some grow as a crust with the perithecia embedded in a spreading hard black body (the stroma) on top of the wood, like the Common Tarcust, and some species grow with the stroma forming beneath the wood and the perithecia emerging through it as little black dots. Wikipedia notes this “widespread genus is estimated to contain 32 species”. Even my fairly specialist literature at hand notes only about four species in detail, and I found no records of which might be found in the UK.

This cross-section photo shows the perithecia of this Eutypa species growing beneath the surface of the wood.

To be fair, such widespread but generally unremarkable types as Eutypa, of which we can find many more examples within the vast understudied field of ascomycetes, are not likely to be of much interest to anyone beyond those who have dedicated their life to the study of such things right down to the level of molecular genetics. I quickly decided it wasn’t worth my losing much sleep over narrowing it down to a species level.

However, that they themselves play host to more interesting species like our focus species, Chaetosphaerella phaeostroma, and therefore provide vital clues as to their identification, is more of interest to the amateur mycologist, and points to the complex and little understood interconnectedness of our woodland ecosystems. (I have covered several such examples of fungi-on-fungi relationships previously in these postings, including the Yellow Brain, the Silky Piggyback and the Bolete Eater).

The other purpose of this month’s post is also to remind ourselves how surface features of many fungi only get us so far, and that how the complex and unusually-shaped spores of many of the otherwise nondescript ascomycetes can be a handy guiding feature. 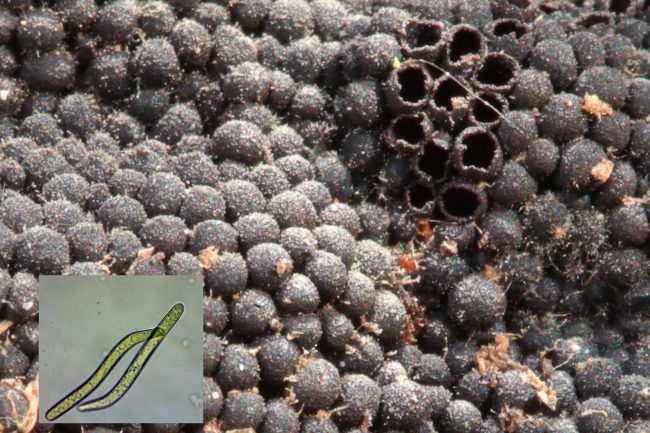 The lack of the fuzzy subiculum, the vestiges of white downy hair on the perithecia and in particular the long, worm-like spores guide us to an identification of Woolly Woodwart.

As an example, I just want to quickly mention another species I found recently beneath a damp, well-rotted deciduous log, the Woolly Woodwart (Lasiosphaeria ovina). The one has an english name, and one that reflects its appearance. While it too grows as tiny spherical perithecia that match the size of those of Chaetosphaerella phaeostroma, these are not immersed in the same black felty subiculum but are typically covered in the woolly white hairs that give it its common name. Except, however, that in the case of the specimen I found, these hairs had worn away, leaving distinctly un-woolly little black balls with little to identify them from without diving into the microscopic realm. Fortunately this was another one with highly unusual looking spores; large, long and worm-like, with dimensions around 40x5 microns, and singled celled – indeed, I initially thought I’d chanced upon a stray nematode on the microscope slide.

There are dozens of pages of tiny non-stromatic pyrenometous species listed in my go-to guide Fungi of Temperate Europe (vol 2., to be precise), and many many more unlisted. I hope that the example of Chaetosphaerella phaeostroma shows that not all need a microscope for identification, and that its not worth being too daunted by this group. 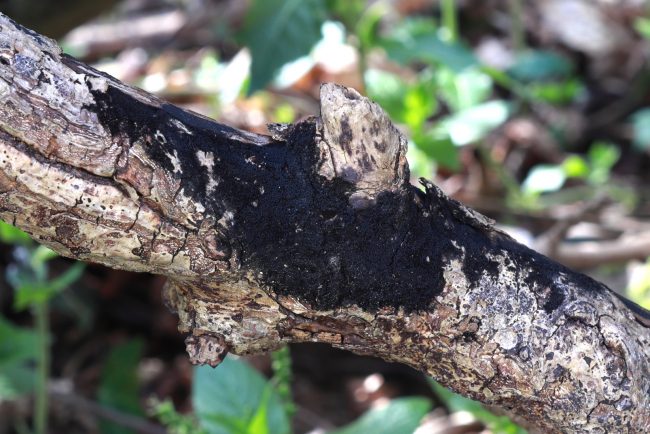 Not seen this yet. I will keep an eye out!