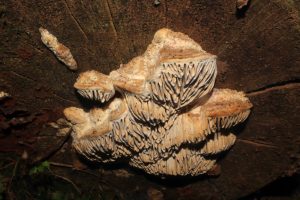 It is good to have points of orientation in the woods. No matter how familiar with a particular spot you might be, these environments can change so dramatically throughout the seasons – paths and clearings become overwhelmed with brambles, branches that weren’t an obstacle in the winter become suddenly more so when covered in leaves, and woodlands are ironically much gloomier in the summer months with a thick canopy overhead than when the trees are bare – that it’s surprisingly easy to lose ones bearings.

One of the marker points in my favourite stomping ground, a chestnut coppice just outside of Canterbury, was a bracket fungus that I found growing from the top of a stump several years ago. It was a relatively easy identification for me from this sometimes daunting group – the labyrinthine arrangement of branching, elongated grooves quickly pointed me towards an Oak Mazegill, despite the fact it was growing on chestnut. 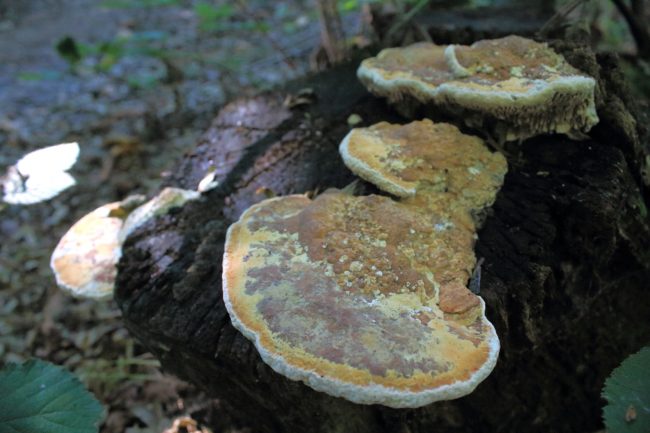 For several years, this particular specimen by the side of the path also signalled the point where I knew I’d entered into a sector of more ancient woodland, and one of those hotspot areas where there were usually lots of exciting finds nearby. Then one day it was gone – the clean cut at the base where it grew from the wood indicating that is had been consciously removed with a knife. Even now, about a year later, I can still see traces of the patch where it had endured on the top of the stump for so many seasons.

The Oak Mazegill, or Daedalea quercina – the first part of its latin binomial referring to the figure of Daedalus who in Greek mythology constructed the labyrinth at Knossos housing the legendary minotaur – is a particularly prevalent fungi in my local woodlands; much more so because, as a perennial, the fruiting bodies last for years rather than rot back or drop off at the end of the season. It shares this aspect with the tough woody brackets like the Artists Conk (Ganoderma applanatum), covered in passing in a previous post on brackets, which has been known to last for decades. Oak Mazegills aren’t quite as durable, although I’ve no real idea how long a fruit body might last. Their flesh is tough, but still possible to make a clean cut through it with a sharp knife with relative ease, as if it were a piece of rubber. 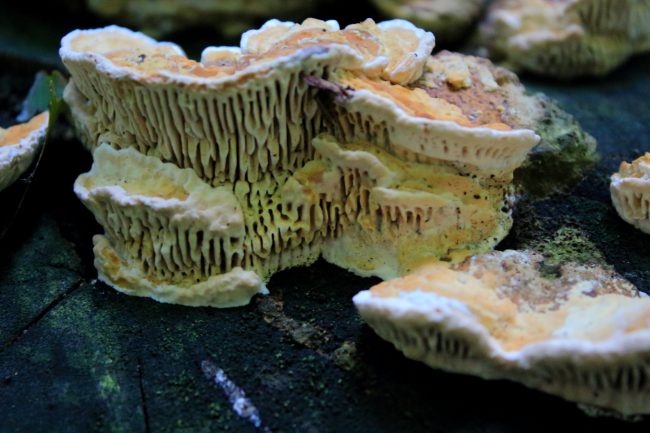 This species highlights the importance however of always looking at the underside when trying to identify brackets. The top is rather nondescript, a sort of buff, pale yellowish brown colour ranging to orangish brown and reaches up to 20cm across. They often grow in semicircular tiers, with the full width of the body firmly attached to the wood making them very difficult to dislodge, and sometimes have an upside-down pyramidal shape, so that if viewed in profile, the maze-like underside is very easy to see.

The growth isn’t always so uniform, however, drawing attention to the fact that there can often be a fine line between the brackets and certain poroid resupinate or crust fungi, with the form they assume heavily influenced by the orientation of their substrate. 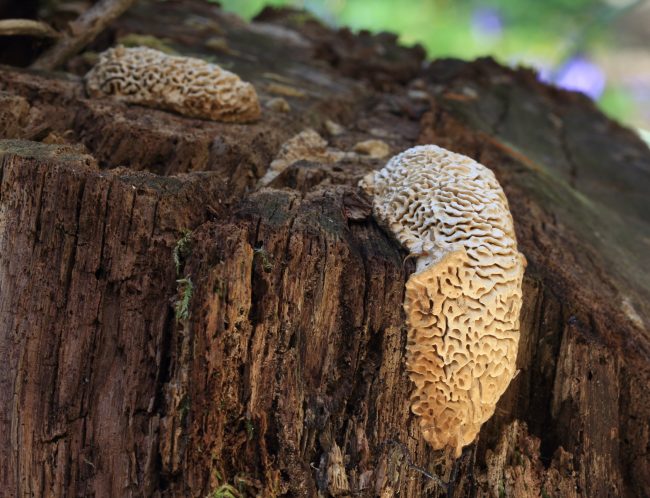 For example, I found myself once very confused by a newly emerged Oak Bracket growing from the top of a  stump that had yet to form a cap, so that all that could be seen was a think bulbous growth covered in brain-like grooves that could look like a number of other thick poroid resupinate fungi, such as the Common Mazegill (Datronia mollis) – and it should be mentioned that the Common Mazegill, while often found in its flat resupinate form, can form caps if growing on a vertical substrate, albeit with thinner caps of a far darker colour. 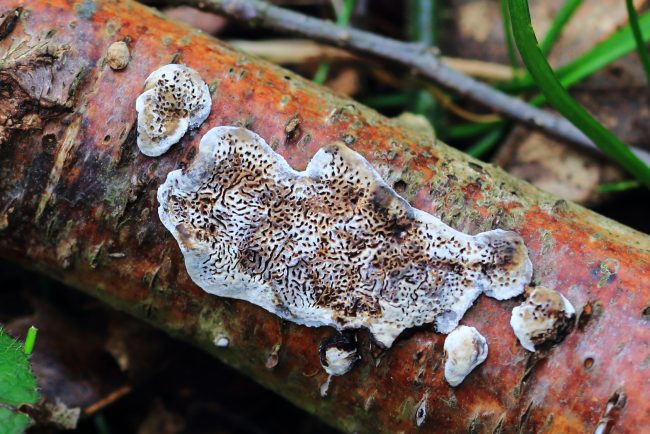 Mature Oak Mazegills, I do find pretty distinctive, but the reason I’m covering them for this month is that it is during the summer months that the new fruitbodies start emerging, so if you have any problems identifying them, I’d suggest going back and monitoring their progress over the coming months, for there are a couple of species that you could confuse them with before they are fully grown.

The first of these is the Birch Mazegill (Trametes betulina), but these form much more delicate annual fruitbodies which are thinner fleshed and more easily broken, with grooves on the underside that are sharper edged and look more like conventional mushroom gills (although as I described in the post linked above, these aren’t true gills) and a felty upper surface. They also grow on birch, rather than oak or chestnut, so there shouldn’t so much room for confusion here. 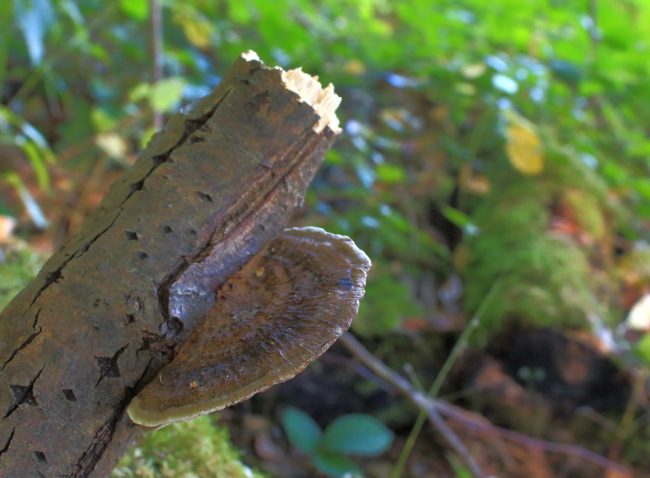 The Blushing Bracket is less ‘chunky’ than the Oak Mazegill, despite certain similarities when viewed from above.

Rather more easily confused for the Oak Mazegill, however, especially in their early stages of growth, is Daedaleopsis confragosa, the Blushing Bracket. Again, these feel a lot slighter, thinner and flatter than the chunky, coarse gilled bodies of the Oak Mazegill, although the flesh is similarly tough.

However the base is much narrower where it grows out of the wood, making it look more fan-shaped. Looking underneath, the pores are much less maze-like, and more like straight lines, which become more elongated as the cap grows radially outwards. 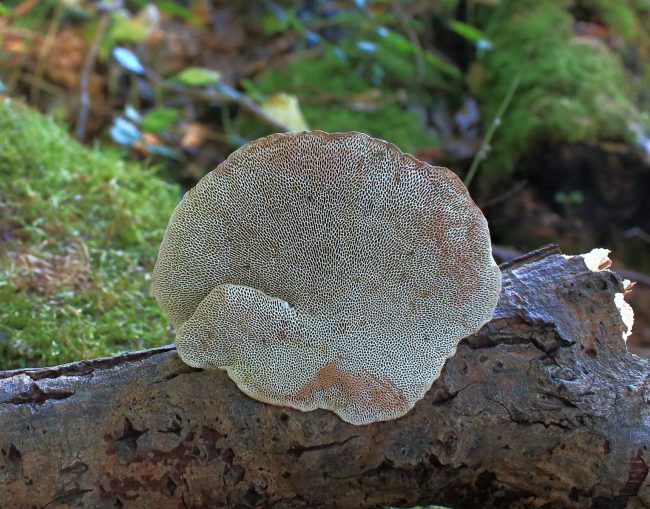 The cap surface starts out a pale beige, but as it grows, it darkens through pinks, browns, russets and vinaceous purples to near black, hence the name. They also are more pronouncedly ‘zonate’, with subtle differences in texture and colour appearing from the centre and outwards.

The Blushing Bracket might be confused with a number of other long-pored brackets in their early stages, but if you follow their development across the months leading into winter, it soon becomes clear what they are. Again, they favour deciduous woods, but are less likely to be found on oak and chestnut than on birch, alder and willow.

Some of the literature suggests that Blushing Brackets are perennials, like the Oak Mazegills, but my experience suggests that while the new fruit bodies from any given summer may be found well into the winter, very few make it past a year. 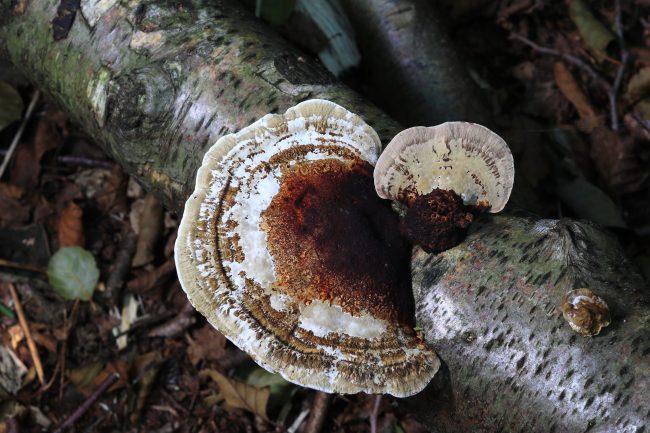 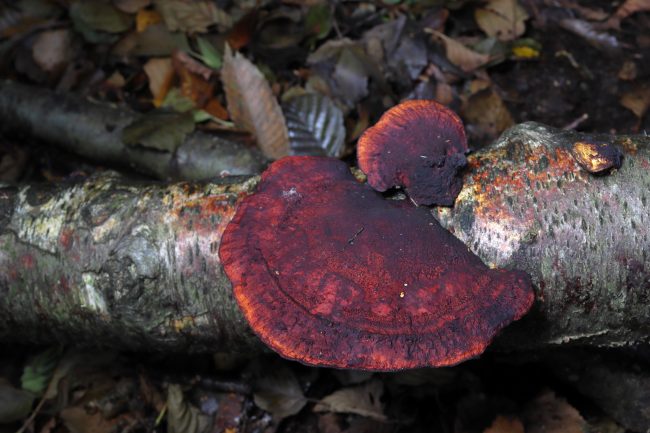 These are but a couple of the more common hardwearing brackets with elongated pores that are found in the UK that might seem a little drab when just glimpsed in passing, but actually are quite interesting when you know what you are looking at. Like so many fungi, the exact differences are difficult to describe precisely in words, but once you get a feel for them, they can be recognised at a glimpse.

If you are a regular woodland wanderer, it’s worth paying at least passing attention to them because, as mentioned before, the new fruitbodies will have already begun appearing by now, and given that they’ll be with us for some months yet to come, it’s rather fascinating looking at how both species develop in form and colour. 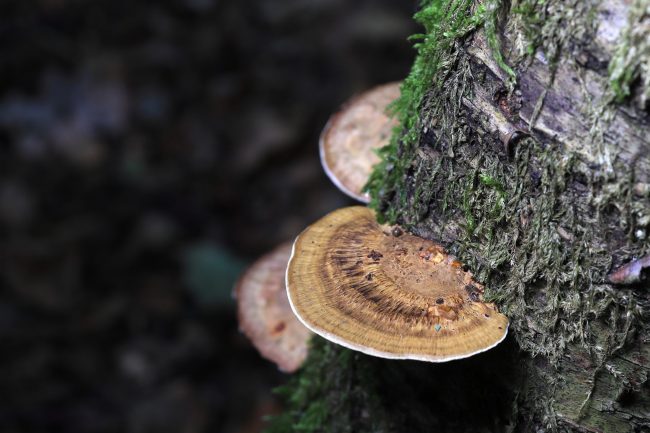 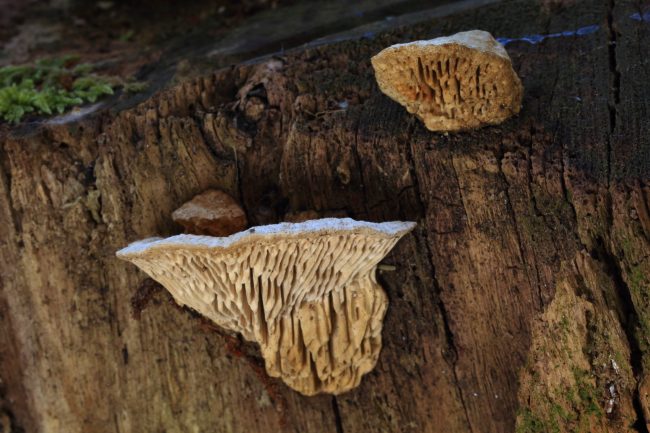 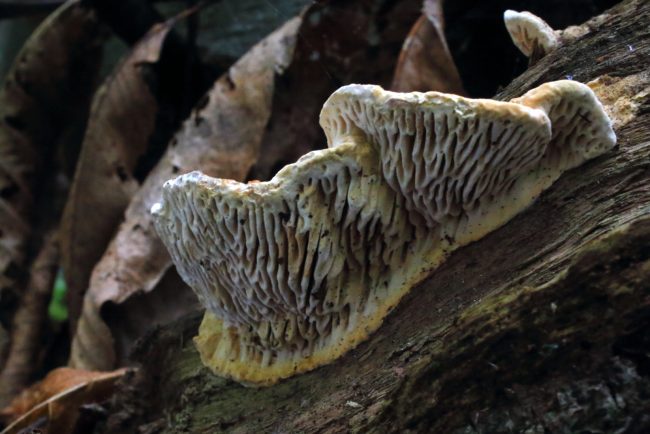 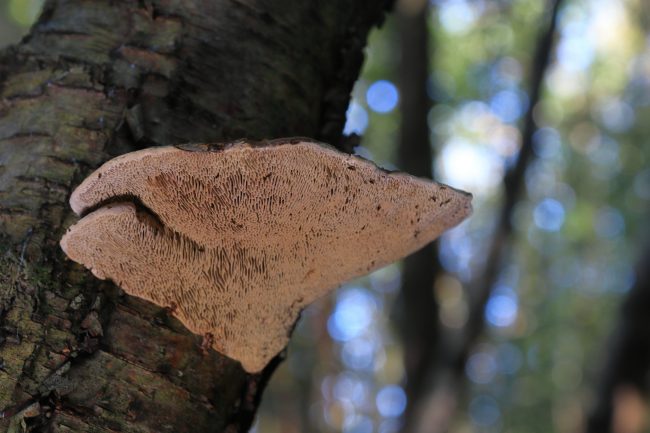