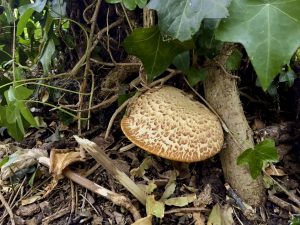 Bracket fungi encompass a host of species that typically grow in tough semicircular shelves on tree trunks, logs and branches, their mycelium consuming both the living and the dead wood within (although there are some soil-dwelling types that form mycorrhizal relationships with their hosts). For more on mycorrhizal fungi, see this previous posting on Fly Agarics.  The term has been applied in a general fashion to various examples on the basis of the physical form of the fruiting bodies rather than any genetic kinship. As such it includes such notable edibles as the Chicken of the Woods (Laetiporus sulphureus) also known as the Sulphur Shelf, and the grisly looking Beefsteak fungus (Fistulina hepatica), which oozes a blood-red liquid when cut (image at end of post).

Other brackets are the massive, horse-shoe like growth of the Tinder Fungus (Fomes fomentarius), which no one would describe as worthy of eating, and the decorative Turkey Tail (Trametes versicolor). 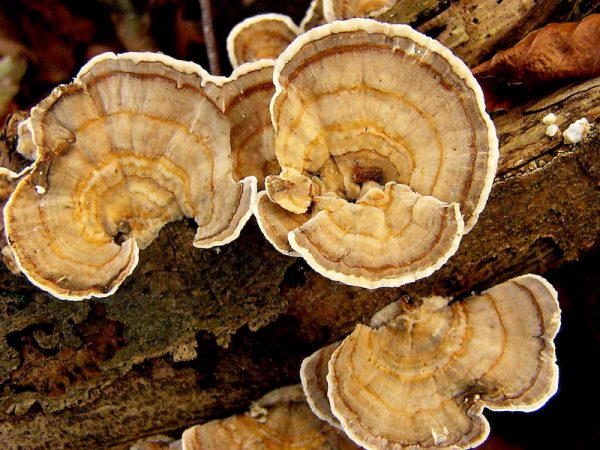 However, the term bracket fungi also refers more specifically to the group known as the polypores, so-called because instead of gills the fruiting bodies release their spores through numerous vertical pores and tubes on their underside. This tube layer is supported by the more durable upper layer that grows out of the substrate known as the subiculum.  Because of the woody or leathery toughness of the subiculum on many bracket fungi, the fruiting bodies, known commonly as conks, endure throughout the seasons, in some species lasting for many years. While the fruiting bodies of your average gilled mushroom pop up in Autumn sometimes for a matter of days, bracket fungi are regularly encountered throughout the year.

The best example within the polypore order are the Ganoderma (litrally “shiny skin”) genus, best represented in the UK by Ganoderma adspersum, or the Common Ganoderma, and Ganoderma applanatum, alternatively known as the Artist’s Conk, because the white underside, which goes brown when bruised or scratched, has been used as an etching medium for artists over the years (the applanatum part of the Latin name means “flattened”). 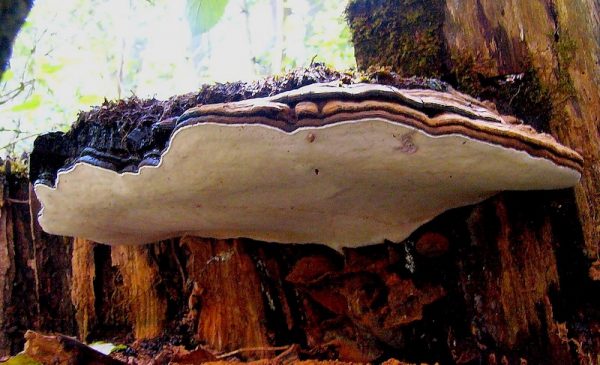 In reality, the differences between numerous individual Ganoderma species are difficult to detect for the layman. For example, though physically near identical, the Ganoderma adspersum found in Europe is genetically distinct from Ganoderma australe, or the Southern Bracket.  Patrick Harding in the Collins Mushrooms spotters guide, first published in 1996, claims that the Artist’s Conk can only be distinguished from the Common Ganoderma as it is “more sharp-edged and has thin, white-flecked, brown flesh.”

What we can say about these commonly found perennials is that they tend to grow at the base of living trees and on dead stumps in solid concentric rings that harden and form part of its structure, increasing in size on an annual basis. This means that they get can pretty big. Most guides say the average is between 10-30cm, although they have been known to get up to a metre in diameter and 20cm thick.

They can also endure for decades, “40 to 50 years, perhaps longer”, Paul Stamets writes in Mycelium Running. Consequently, the ever increasing surface of the spore-releasing underside means they are extremely fecund, able to produce spores at a rate of 500,000 per minute for several months at a time. Many of these, as Stamets notes, float upwards to result in dusting of russet brown powder on the woody topside. 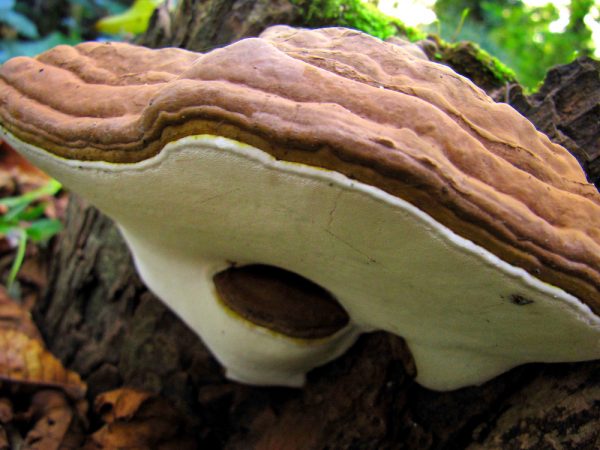 How beneficial this is to the overall health of the forest ecosystem is up to debate. Ganoderma applanatum is described as both “Saprobic or parasitic”. Stamets describes it as “a fantastic recycler of dead trees”, while the Royal Horticultural Society website points out that it is also responsible for the death of the tree in the first place: “Beech heart rots, caused by the bracket fungi Ganoderma applanatum and G. adspersum attack a wide range of broadleaved hosts, especially Fagus (beech). Unfortunately there is little you can do in terms of hygiene or cultural control to prevent bracket fungi. Removing brackets to prevent spore release will have very little effect on the overall risk.” They gradually rot away at the heartwood, decomposing the centre of the trunk until it eventually topples over. No surprise that we often find the larger specimens on ancient hollowed out trees. This post on Arborline Tree Care  might shed some further light on the issue.

Nevertheless, these are slow rotters and seem more likely to take the easier option of consuming dead than living wood. If Stamets’ observation that they are “prominent in old growth forests” is correct then, along with their sheer longevity, it stands to reason that any adverse affect they might have on their hosts takes place over many many years. Not so for their tropical cousins such as Ganoderma philippii or Ganoderma pseudoferreum, currently the scourge of commercial cultivators of such economically crucial crops as cacao, tea and coffee.

Still, Stamets argues that the presence of Ganoderma applanatum actually inhibits more aggressive pathogenic fungi, and for this reason it “serves as a steward not only for the ecological health of woodlands but also for improving health of their human inhabitants.”

Yes, you read that correctly. These tough woody conks may not look like the most obvious of foodstuffs, but they can have some sort of culinary, or rather, medicinal application if boiled and taken in tea form. That said, preparing your own might seem more trouble than it is worth, particularly without a 100% positive identification of both the fungus and the tree it is growing on (as I’ve mentioned, many fungi accumulate toxins already present in their host, especially if growing on yew trees). 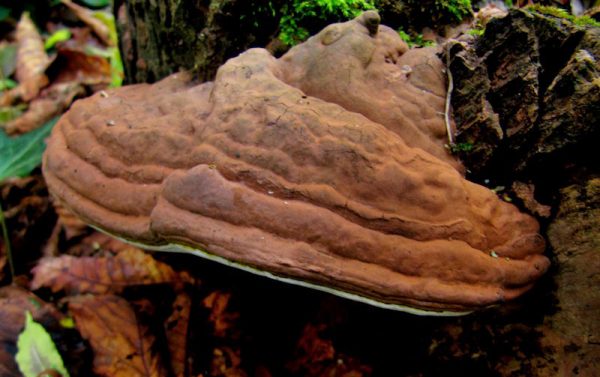 A far better option would be to do as the Chinese do and buy it in prepared form, and not Ganoderma applanatum, but the more celebrated Ganoderma lucidum. With its red smooth varnished top, the widely-cultivated Lingzhi (or Reishi to the Japanese) is arguably the most aesthetically pleasing of the Ganoderma. There is a host of purported health benefits [https://www.organicfacts.net/health-benefits/other/reishi-mushrooms.html] to this particular fungus. Whether you believe they are all they are cracked up to be or not, the fact remains that millions across the world have been consuming this legendary medicinal mushroom for thousands of years.

Moving away from Ganoderma however, there is another bracket fungi that will be coming into its own around this time of year, and so I nominate Polyporus squamosus for May’s monthly mushroom.    Its common name, the Dryad’s Saddle, comes from the fact that it looks like a seat for a woodland fairy, while the striking scaly hen pheasant-like patterns on its upper surface have earned it the alternate names of the Pheasant’s Back mushroom and the Scaly Polypore. It takes its Latin name from these scales or “squamules” on its upper surface. 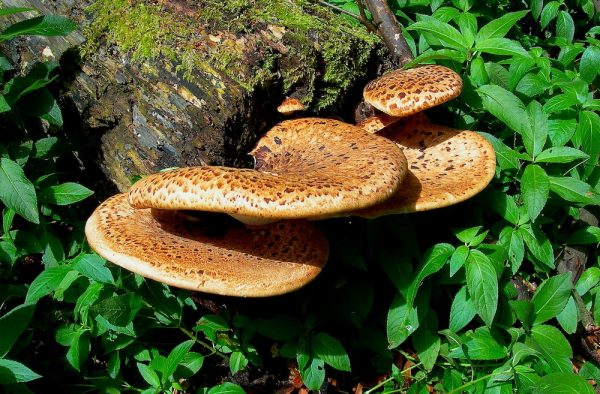 Like the Common Ganoderma and Artist’s Conk, these are often found decomposing dead wood, but also cause white rot in the heartwood of living hardwood trees. They similarly grow in circular fan-like shelves, but also in massive funnels that can reach around half a meter in diameter and 5cm in thickness. The upper surface grows in concentric rings of dark scales over a creamy yellow to pale brown surface. The underside is creamy yellow and pitted with pores. 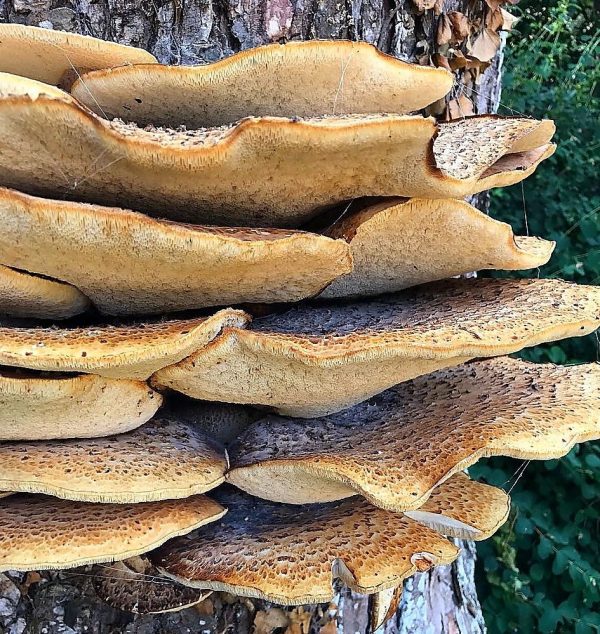 The most obvious difference between the Dryad’s Saddle and the Ganoderma is that the fruiting bodies are annual and the white to cream flesh is soft, at least in the early stages of growth, growing increasingly leathery as the months go by before shrivelling and dropping off. They are said to be edible if you catch them in this early stage, although I’ve not been tempted myself.

The mycological pioneer Mordecai Cubitt Cooke in his 1862 work A Plain and Easy Account of British Fungi, with Especial Reference to the Esculent and Economic Species espoused its virtues for sharpening razors, alongside the Birch Polypore (Piptoporus betulinus), the species that ultimately inherited the name of the Razor Strop Fungus. Meanwhile, R.T. and F.W. Rolfe’s The Romance of the Fungus World (1925) points towards the extremely fast growth rates of the species, reporting that one particular specimen had “attained a weight of 34lb. in three weeks from the time of its first appearance, which is at the rate of over 1½ lb. per day.”

If you roaming about the woods this kind of year, the Dryad’s Saddle is not an uncommon discovery, and makes for a dramatic herald for the arrival of summer. 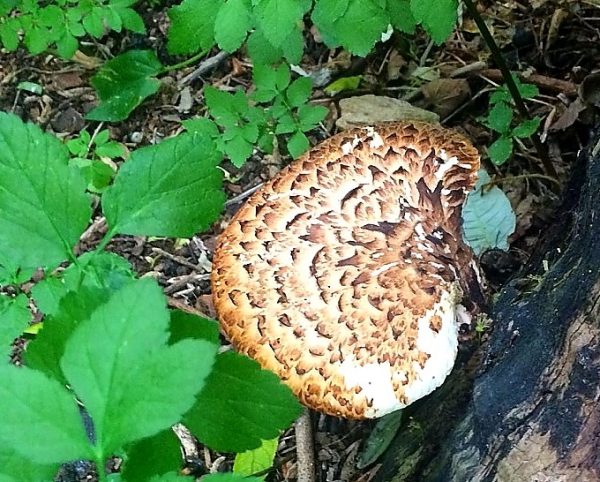 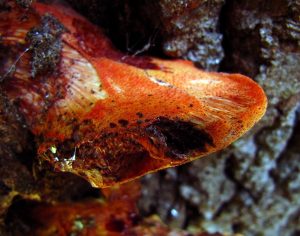 […] the supernatural is deeply engrained in mythologies across the world, and just as last month’s Dryad’s Saddle was originally so named because it was about the right size and shape for a woodland fairy to sit […]