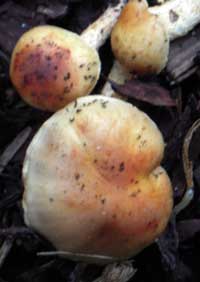 The Fungi are a very diverse group of organisms, ranging from the true fungi (Mycota), which includes the mushrooms and toadstools, and the Oomycota (which includes the potato blight fungus).  Unlike green plants, fungi do not have any chlorophyll so cannot make sugars and other compounds by photosynthesis. They get their sugars / carbohydrates through being saprobes (saprophytes), parasites, or sometimes symbionts. 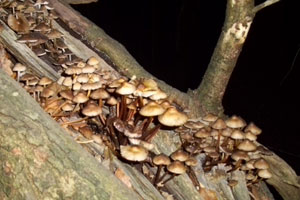 Many soil fungi are saprobes, that is, they ‘feed’ on the dead leaves, bits of bark, dead bodies of insects and other animals that end up in the soil. Fungal saprophytes, together with bacteria and other organisms, use enzymes to break down the complex chemicals in the dead and decaying remains, releasing  simpler compounds such as sugars and amino acids. These can then be used for the growth and development of the fungi. Above image: a rotting trunk being broken down by fungal saprobes (thanks to Giles for photo). 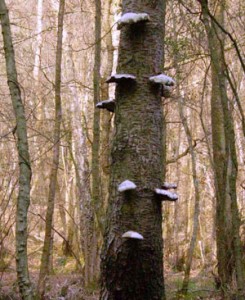 Fungal parasites obtain their sugars and amino acids by feeding on another living organism (the host). Examples of parasitic fungi include mildews, ergot of rye, bracket fungi, and ‘rusts’ on wheat and hollyhocks. The host can be us – athlete’s foot, thrush and some lung conditions are caused by fungal parasites. By definition, parasitic associations do not benefit the host.

Some fungi enter into an association with another living organism in which both partners benefit; this is symbiosis. Lichens are examples of symbiotic associations between various types of algae and fungi, and mycorrhizae are associations between fungi and the roots of certain trees and other plants. The microscopic, tube-like fungal threads (called hyphae) form a network around the roots of a tree.  They take various carbohydrates from the tree that it has made through photosynthesis.   However, the transfer is not one way; the tree benefits as it gains mineral nutrients from the extensive fungal network of hyphae that ramify through the soil – absorbing a variety of minerals. As a result of their enhanced mineral nutrition, mycorrhizal plants often show better growth and development when compared to non-mycorrhizal ones (of the same species).

One example of a mycorrhizal association is that of truffles and trees. Black truffles have been prized for centuries for their unique flavour and aroma. The ‘production’ of the black Perigord truffle or Tuber melanosporum was probably at its height at the end of the C19th and before the 1st World War when the yearly harvest was estimated at 1000 tons per year. It is far less nowadays, a fact that is reflected in the price. Truffles are found in woodlands, the edible fruiting body (ascoma) is found 2 to 12 inches underground and 4 to 5 feet from the base of an oak tree. White truffles or Tuber magnatum may grow in association with other trees such as hazel, poplar and beech, and are perhaps more typically associated with the Piedmont region of Italy. Another species is the black summer truffle or Tuber aestivum; this is to be found in Northern Italy, through Central Europe and the UK. 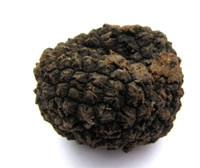 Wild boar used to eat truffles and, in so doing, helped disperse the spores; they were attracted by the powerful scent of the fungus.  Domestic pigs were used to track down the elusive fruiting bodies , though dogs are ’preferred’ now –as they eat less of their findings!.  The smell or scent of truffles is a complex mixture of volatile sulphur compounds (such as dimethyl sulphide), aldehydes and androstenol (which has a musky / sandalwood smell).

In the 1970’s, the National Agricultural Research Institute at Clement Ferrand in France worked out that if young tree saplings were inoculated with truffle spores then it was much more likely that when the trees grew on to maturity,  they would produce truffles beneath them. The fruiting bodies probably develop in heat of late summer, mature and ripen, weighing typically one or two ounces (though they can be much bigger) .

It is now possible to buy truffle-inoculated trees in the UK.  Trees inoculated with the black winter truffle or the summer truffle, are available from a variety of commercial outlets (see below). The black winter truffle is probably better suited to the climate of mainland Europe. Tree species available include Hazel, Oak and Evergreen Oak.
http://www.plantationsystems.com/shop
http://www.seedsofitaly.com/catalogue/12
http://www.treestogrow.co.uk/home.php?cat=253

Great article. I use truffle when its in season and i get mine from The Truffle Queen, https://www.thetrufflequeen.com . Its really difficult to produce good truffles as there are so many factors like soil condition, drainage, temperature and frost, properly inoculated trees and so on and so forth. It remains the reason the price is so high. THeres a certain “magic” to truffle production.

We have found a fungi that looks like a small potato but when cut open resembles a black truffle. Can any one give any information about what it could be?

[…] around the roots of a tree. These are known as ectotrophic mycorrhizae and are different from the mycorrhizae seen in grasses and orchids – endotrophic forms).  The mycorrhizal net takes and uses […]

good article, never looked into truffle hunting and this is the first place i’ve read about where they grow. nice one

An excellent article Chris. There are a growing number of people, including me, in the UK using dogs to find wild growing summer truffles. These truffles are usually, though far from exclusively, found under beech trees growing on chalk. I would welcome contacts from suitable woodland owners in or near Dorset that are interested in sharing this potentially valuable commodity. I can be contacted via http://www.hedgerow-harvest.com/truffles.html.