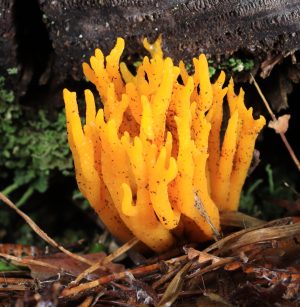 Quite remarkably, this is the 50th of my monthly Woodlands fungi blog posts since I began some four years ago with a short piece on Chicken of the Woods. They originally went out unto the heading of ‘Monthly Mushroom’, but this changed to ‘Fungi Focus’ a couple of years back, with my piece on Ash Dieback reflecting how my own interest in the mycological world had moved past the point where the first question I asked when finding a new species was whether it was edible or not.

Instead, the posts were intended to reflect the wider questions I began to ask myself around such ideas as where certain species fit within the wider woodland ecology and what wider purpose they might serve – questions that the more I continue to dig deeper into the subject, the more I realise how much more we still need to learn about this cryptic world.

I’ve also hoped to show that there’s a lot more to fungi than the familiar agaric cap, gill and stem types – a world of crusts, rusts, discs and jellies that also leads into other related areas such as slime moulds. In fact, as I look back over my posts so far from 2021, I realise that only one of the subjects, the Fairy Inkcap, is a conventionally umbrella-shaped one. 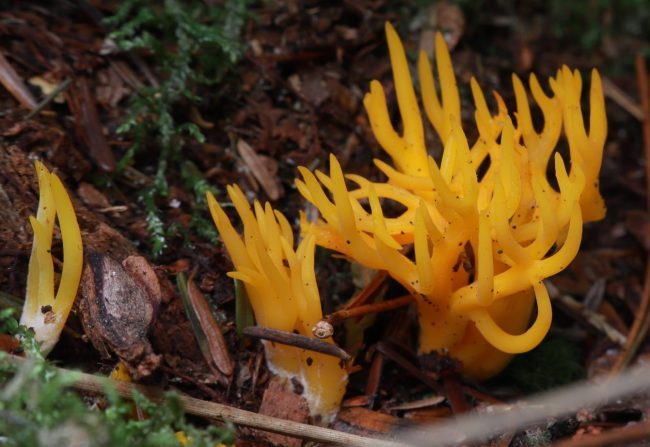 We are now moving into the peak season for the more eye-catching and recognisable fungi species, and I shall be returning to some more standard mushroom and toadstool examples over the coming months. Before this, however, I just wanted to dwell on a group of jellies belonging to the Calocera genus of ‘Stagshorns’ that have already started coming into their own, although they can be seen pretty much around the year.

Geoffrey Kibby’s wonderful Mushrooms and Toadstools of Britain and Europe vol 1 (3rd edition published last year in 2020) lists five biological orders within the broad group of jelly fungi. The Auriculariales include Wood Ears and Tripe Fungus, as well as the two black species encompassed by the name Witches’ Butter, Exidia nigricans and Exidia glandulosa; while similar in form, the two yellow species known as Witches’ Butter belong to an entirely different order, Tremellales – the fundamental difference is that these types are not feeding on the dead wood itself (i.e. are saprotrophic) like the Auriculariales, but are parasitic on the mycelium of other fungi feeding within the dead wood. 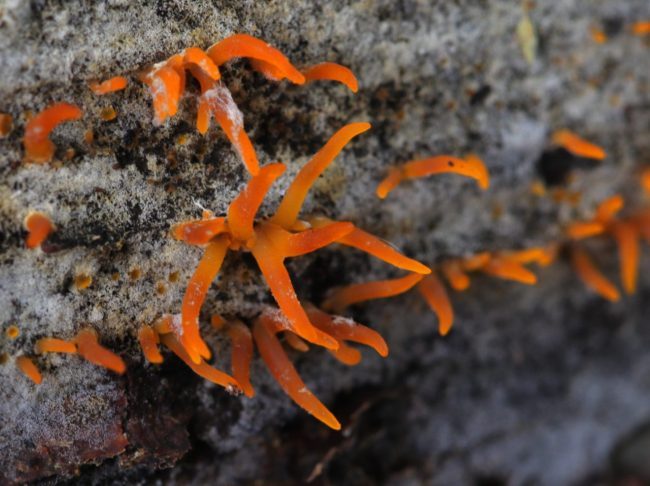 The Calocera species belong to a third order, the Dacrymycetales, which also includes the Common Jellyspot (Dacrymyces stillatus) that you might see proliferating all over fences, garden sheds and outdoor furniture in damp weather. (We’ll gloss over the other two orders Kibby lists that contain gelatinous fungi, Agaricomycotina and Sebacinales).

Pat ‘O Reilly writes in First Nature that the name stems from the prefix ‘calo’’ meaning beautiful and that the ‘-cera’ part comes from the Ancient Greek for ‘like wax’, as indeed, these beautiful horn-like fungi do have a distinctive waxy texture to them.

Within the Calocera genus itself there are 15 species, although just a few seem to be commonly found in the UK, and only two of these make it into most field guides. But they are all instantly recognisable, not to mention incredibly photogenic, despite their sizes making them surprisingly tricky to get a decent photograph of. 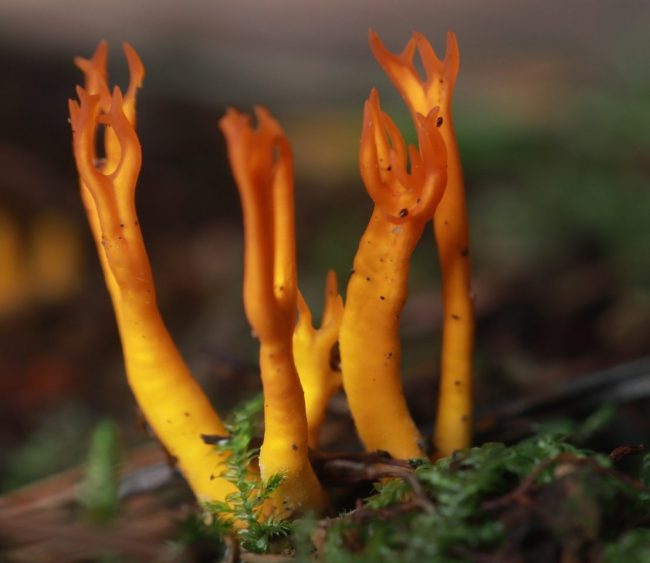 Calocera viscosa, commonly known as the Yellow Stagshorn or Jelly Antler, is the type species for this genus – the species that typifies a particular group and which is considered the prime reference point for other species within it. Like the others, it is a bright yellow, with pale orange to red tints appearing in drier weather, although occasionally pale white versions can be found. The reason for the Stagshorn part of the name is fairly obvious. These grow in clumps of branching antler-shaped growths, like vivid yellow corals.

They are not, however, related to other coral fungi, like the Ramaria species, which are a lot tougher in texture due to their flesh being the same solid mass of hyphal cells as the fruitbodies of normal mushrooms. The various Ramaria species seem to be a lot less common than the Yellow Stagshorn and in any matter, are not jelly fungi. The differences are easy to discern if you see them side by side than, though rather less easy to describe. If we ignore the superficial similarities, an obvious one is that if you try and take a sample of Yellow Stagshorn, it tends to squash between your fingers and it’s difficult to get home a piece home intact without it squishing or drying out. If you do manage to get to the stage of getting spores samples on a microscope slide, you’ll also notice that Calocera spores are white and more allantoid or sausage-shaped than the brownish more symmetrical ellipsoids of the spores of Ramaria species. 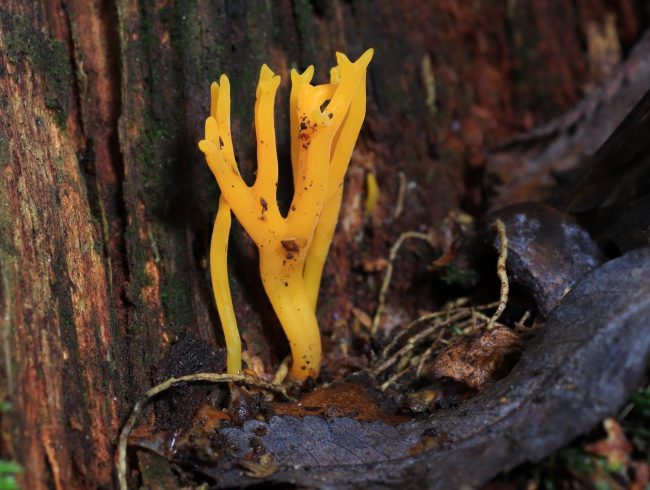 Another feature that will points towards positive identifications of the Yellow Stagshorn is that they grow exclusively on conifer stumps and dead roots, I found one right at the base of the rare Antrodia carbonica crust fungi I found last summer on a Douglas Fir stump. They are typically not very large, seldom reaching 10cm in height, with several of my guidebooks listing a range between 2-8cm tall. This makes them relatively easy to spot but actually pretty tricky to photograph in terms of getting everything in focus.

That said, they are considerably easier to snap than their relative, the Small Stagshorn (Calocera cornea), which appears in single pointed, non-branching protuberances, usually less than a centimetre in length and about a millimetre in width. You’ll see these spikes spreading almost like hairs across their hosts, the decaying wood of broadleaved trees, particularly beech. Again, quite striking and difficult to miss, but individually difficult to photograph without a macro-lens and, en masse, it is difficult to get everything in focus. 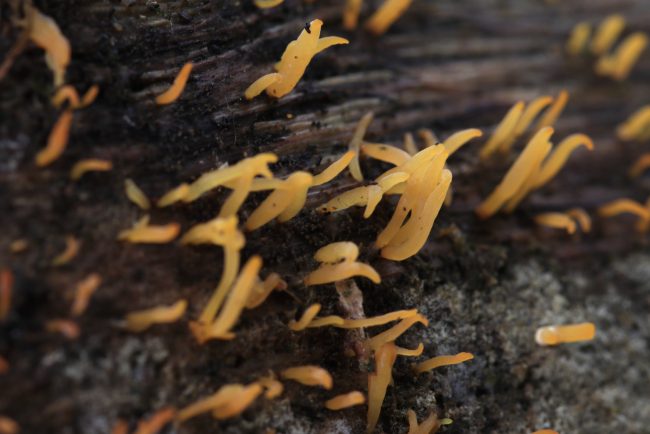 Kibby and the authors of Fungi of Temperate Europe list a couple of other Calocera species. The Forked Stagshorn (Calocera furcata) is about the same size as the Small Stagshorn but has bifurcating tips like the larger Yellow Stagshorn, although appears dotted across its substrate rather than bunched at the base. Calocera glossoides grows in small single clubs, and while it doesn’t have a common name listed in the British Mycological Society’s list of English names, Kibby writes that ‘glossoides’ means shaped like a tongue.

That leaves one more Stagshorn for our focus, the pallid looking and spatula-shaped Calocera pallidospathulata, or Pale Stagshorn. It is not dissimilar in form to C. glossoides, but it’s gelatinous flesh is pale and semi-translucent at the stem, yellowing at the top. This is a bit of an interesting one, this one, because while it appears to be a lot more commonly found than the previous two I’ve just mentioned, this was not always the case. 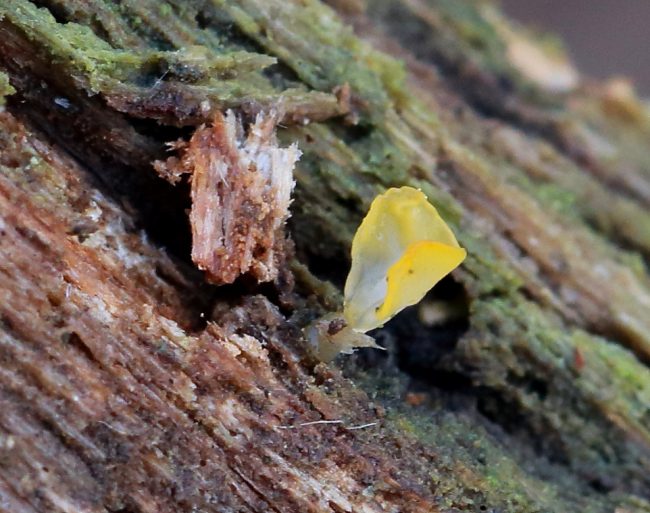 In fact, according to this brief article ‘An alien tale: the history of Calocera pallidospathulata’, the species was only discovered in Yorkshire and subsequently named as recently as 1969. This wasn’t just the first UK record; it was the first record of the species anywhere in the world. How and where it came from remains a mystery, although the article claims that the renowned mycologist and slime mould expert Professor Bruce Ing has conjectured its origins might lie as far afield as Mexico.

Certainly I focussed on a similar case of a fungi taking to British woodlands like a duck to water earlier this year with a blog piece on Crimped Gills. The Pale Stagshorn also seems to have spread rapidly across the UK. In the first decade since its initial 1969 sighting, it had been recorded in a number of locations across the north of England, but made the leap to the south with its first record in the New Forest occurring in 1989. Fungi of Temperate Europe describes its range as “Common in the UK, where probably introduced from North America, but likely to be spreading to other parts of temperate Europe, e.g. the Netherlands; all year.” 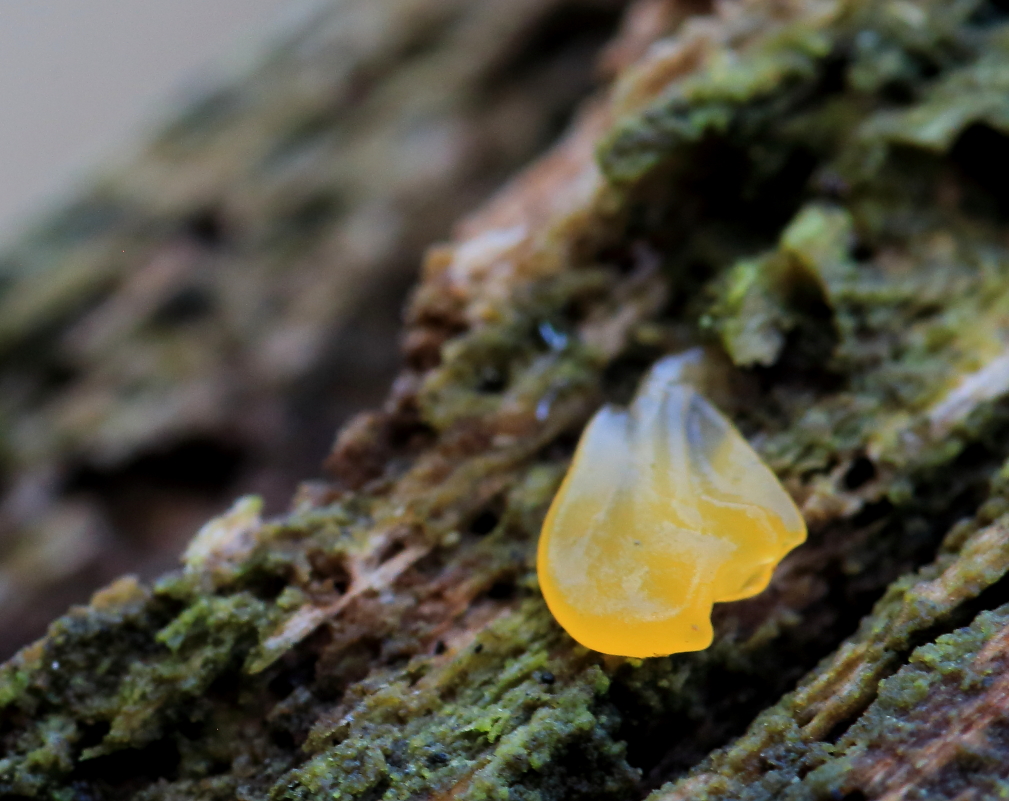 I have to say, that while I have yet to come across Calocera furcata or Calocera glossoides, I did find a patch of Pale Stagshorn in a woods near Canterbury a few years back, so I can vouch for the fact that this particular species has spread to East Kent. Not that we should have anything to fear by this seemingly rapid spread. The Stagshorn species all appear on dead wood, and are not harmful in any way to living trees.

Still, it makes one wonder what the processes and mechanisms might be by which more harmful species such as the Ash Dieback fungus might spread across the country. 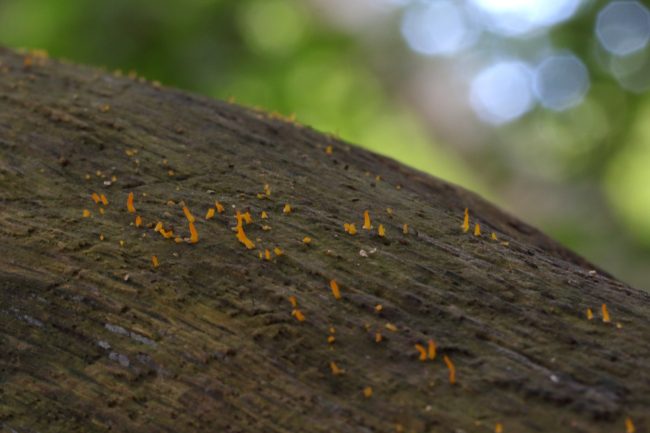 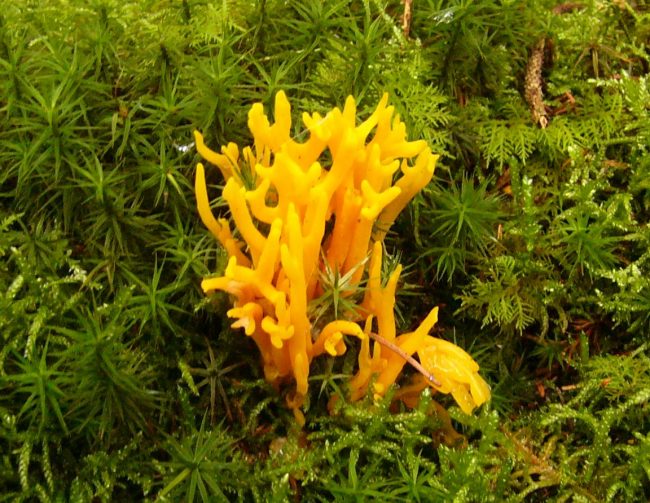