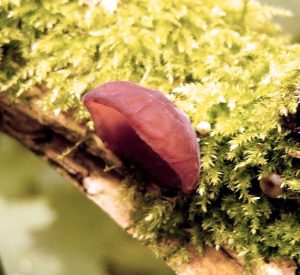 One can only imagine what our ancient forebears must have thought when they first came across the fleshy, shell-like flaps of Auricularia auricula-judae protruding grotesquely from forest branches. We do know, however, that by the time of Francis Bacon’s Sylva Sylvarum, or a Naturall Historie in Ten Centuries (1627), this gelatinous fungal specimen had already acquired its own name and mythology. He described it as “an excrescence, called jew’s-ear, that groweth upon the roots, and the lower parts of the bodies of trees, especially of Elder and Ashes. It hath a strange propertie: for in warm weather it swelleth and openeth extremely. It is not green, but of a duskie brown colour.”

It was, alongside its ear-like form (slightly velvety on the upper side, with a veined underside), this association with elder that provided it with the name that persisted for several centuries, although this has fallen out of favour in recent times for fairly obvious reasons. The Jew’s Ear is now referred to by a host of alternatives, including Wood Ear, Monkey’s Ear, Tree Ear and its current most commonly accepted English language descriptor, the Jelly Ear. 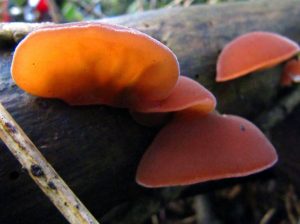 It was nevertheless from the more specific early designation of “Judas’s Ear” that it derived its latin name. As R.T. and F.W. Rolfe outline in their 1925 study The Romance of the Fungus World, it was connected by an “ancient myth... with Judas Iscariot, who was supposed to have hanged himself upon an elder after betraying Our Lord.” The authors do point out in a footnote that the very different Judas Tree (Cercis siliquastrum) has been cited as an alternate specimen from which Christ’s betrayer suspended himself. Indeed, with its weak, springy and hollow branches, the elder seems an unlikely candidate for this particular vilification.

Nevertheless, as Roy Vickery discusses in Garlands, Conkers and Mother-Die: British and Irish Plant-Lore (2010), “elder is probably the most enigmatic plant in the folk tradition of the British isles”, considered simultaneously as a “witch-tree” and as a protector. Vickery himself cites a folk myth from southern Ireland, that “its leaves have an‘ugly smell’, and, moreover its fruit has since degenerated from its original size and excellent flavour to become worthless both as to size and taste”, as “the proof” that this was the tree from which Judas hung himself. 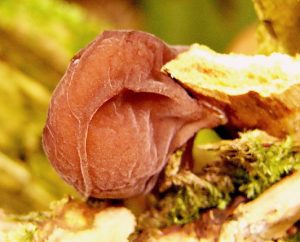 The Rolfes were already slightly behind the times when they referred to the Jelly Ear by the latin name of Hirneola auricula-judae. The German mycologist Joseph Schröter had already classified it under its current nomenclature of Auricularia auricula-judae some four decades beforehand in 1888. The species had first been described scientifically by Carl Linnaeus in his Species Plantarum (1753) as Tremella auricula . Linnaeus had created the Tremella genus, from the latin “to tremble” to describe a host of gelatinous organisms, from seaweeds to slime moulds. Linnaeus’ name for the fungus literally means “trembling ear”. The French physician botanist Jean Baptiste François Pierre Bulliard (1752-1793), an early trailblazer in the field of mycology, subsequently listed it as Tremella auricula-judae in a 1789 study, the first time the Judas connection was made explicit in its scientific taxonomy. Presumably this also derived from the French vernacular names of “l’oreille de Judas” and “Oreille du diable” (Devil’s Ear), highlighting how its guilt by association with elder was not specific to the Britain. 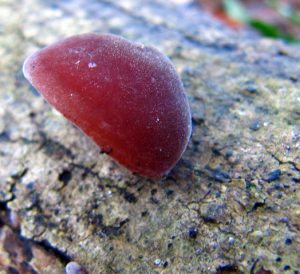 Jelly Ears themselves were subsequently reclassified under a variety of categories, including Peziza (ground-dwelling cup fungi) and Exidia (a genus of various gelatinous blobs that includes the Crystal Brain fungus, or Exidia nucleata). Miles Joseph Berkeley (1803-1889), the clergyman and plant pathologist who coined the word “mycology” to refer to the systematic study of the fifth kingdom (this was the man who, in 1841, pinpointed the fungal culprit behind the potato blight responsible for the Great Irish Famine), gave it the name Hirneola auricula-judae in 1860, before Schröter’s designation of Auricularia auricula-judae was finally settled upon.

Finding ways of describing and identifying fungi is all well and good. The other issue is what does one do with this information. In less enlightened times, fungi were just as mired in their association with witchery and the dark arts as the elder tree, that they were so frequently discovered growing upon. Michael Jordan in Mushroom Magic (1989) points out that one of the possible derivations behind our English word “toadstool” is its origins in the Germanic “Tod Stuhl”, or “stalk of death”. Jordan writes how the pioneering Flemish doctor and botanist Carolus Clusius (1526-1609) neatly divided up all known fungi into edible and poisonous species. For some reason, Jelly Ears were consigned, seemingly randomly, to the latter category. 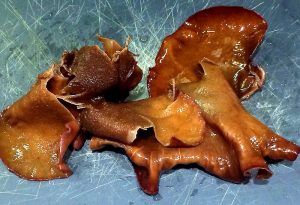 Bacon’s short passage in Sylva Sylvarum not long after suggests such common wisdom was not universally shared, mentioning that the Jelly Ear was used in folk medicine for “the quinsy and inflammations of the throat; whence it seems to have a mollifying virtue. It also has a particular faintish odour when boiled, and then somewhat resembles a piece of black, well-dressed, supple leather.” The Romance of the Fungus World, however, claims this “employment was based entirely upon superstition”, citing Berkeley’s opinion in Introduction to Cryptogamic Botany (1857) that its basis was due “probably to the fancied resemblance of its hymenial surface to the fauces”: In plain English, this means that the minutely-pitted “skin” containing its spore-releasing structures looked vaguely like the back of the throat. 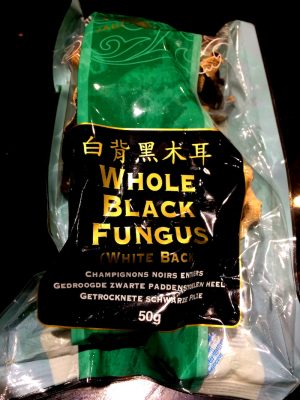 The irony is however, that on the other side of the world, thousands of miles away from medieval folklore, Christian orthodoxy and Renaissance science, the Chinese had been cultivating certain Auricularia species, for culinary and medicinal purposes for over a millennium. The closely related edible Cloud Ear fungus (Auricularia polytricha) is readily found in Asian Supermarkets in bags labelled “Black Fungus”, and is a common ingredient in many Asian cuisines. In Japan, for example, it is known as kikurage, the name comprised of the characters for “tree” and “ear”.

The dried fungus is soaked before it inflates into crunchy latex like sheets, which can be chopped up and added to stir fries and soups (it is a key ingredient in Hot and Sour Soup). Admittedly, the taste isn’t much to write home about, but there’s a satisfying crunchiness to the texture, and contrary to Berkeley and the Rolfes dismissal, there appears to be considerable evidence as to its health benefits in terms of its high levels of iron and Vitamin K; and its cholesterol and blood pressure-lowering abilities.

Of course, one should do ones own research to assess for yourself whether such miracle claims are all they are trumped up to be, but as a culinary mushroom, neither Cloud Ears nor Jelly Ears should be overlooked, particularly as the latter are so easily identified. They are almost as common as elder is in UK woodlands, and can be found all year round as, like the Velvet Shank, they survive freezing, thawing and dehydration.

In the meantime, if you’re at a loss as to what to do with either specimen in the kitchen, here is a recipe suggestion for the scrumptious Hakka Braised Pork with Black Fungus . 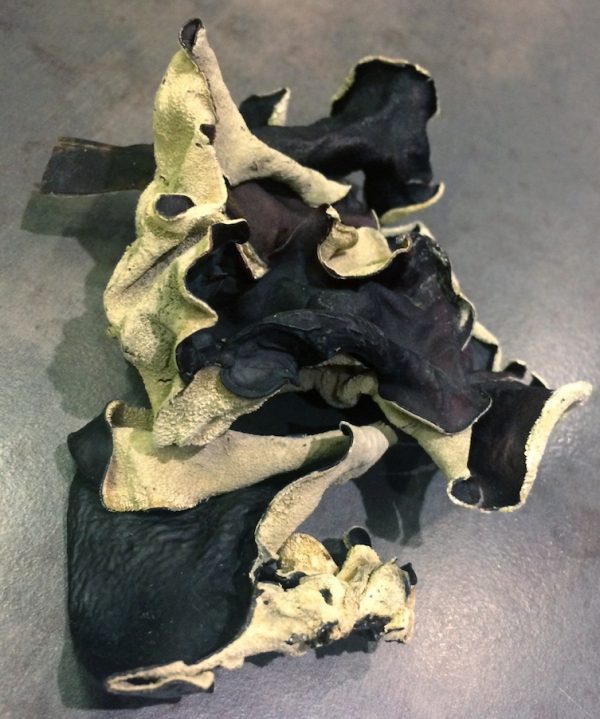 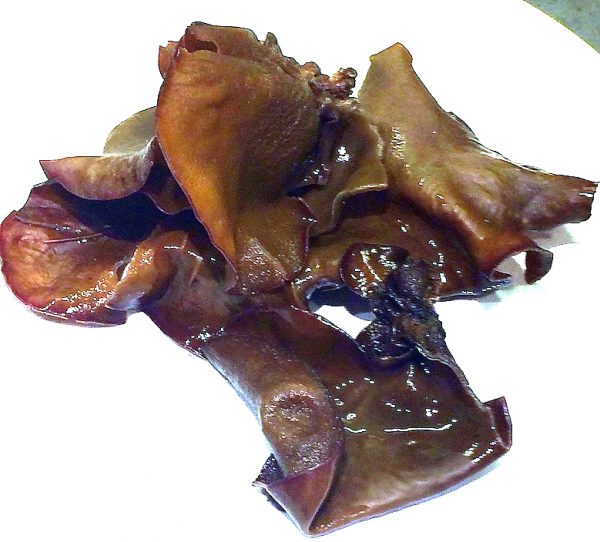 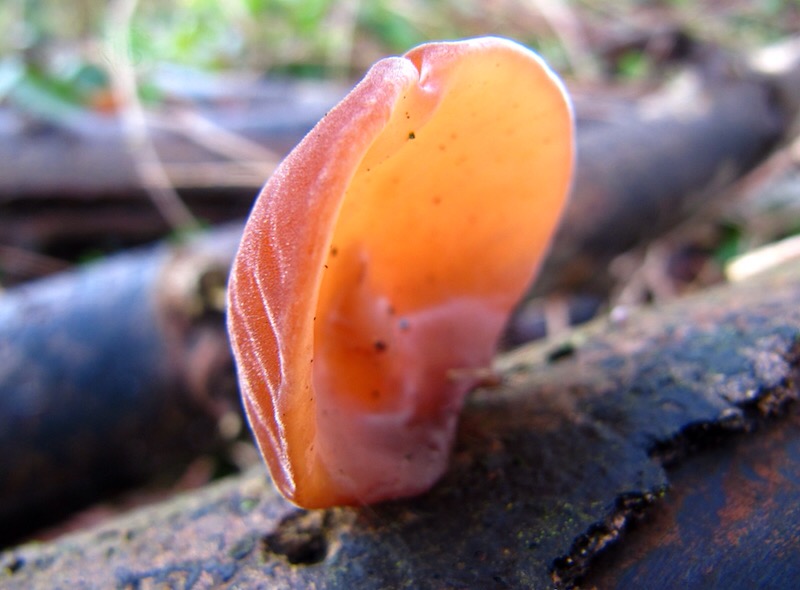 […] have personally consumed Stump Puffballs, fried up with Jelly Ears  as in the photo, and I enjoyed their distinctive aroma, although a friend of mine had them on a […]