Barking Deer or Muntjac ~ by Chris 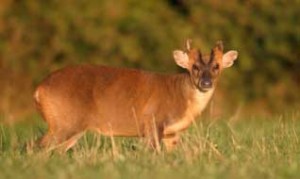 These are otherwise known as muntjac or Reeve’s muntjac, being named after the nineteenth century naturalist - John Reeves. It is a curious looking creature with tusks; a bit like a small pig. Originally native to SE China, it has become feral here. In November, the Radio 4 program “Making History” had an interesting account on the origins of the muntjac in the UK.   This story starts at Woburn Abbey, back in 1893. Following the death of his brother, the 11th Duke of Bedford moved to Woburn. He introduced Reeve’s muntjac to the estate, where it and other animals were kept in enclosures. The Duke was President of the Zoological Society of London, and his collection at Woburn included some 40 species of deer and various other exotic species. By the turn of the century, Woburn was essentially a zoological park (as it is today).

Victorian land owners were keen to find out which species might survive and acclimatise in this country, possibly so that they could be supplied to zoos; which were becoming popular throughout Europe. The Victorians’ interest in such animals was twofold:

The wife of the 11th Duke, Mary, recorded how the different animals fared at Woburn. She noted that animals were kept in large grass paddocks with open sheds or turned out into the open park and that elk, reindeer and caribou had failed due to ‘parasitic disease of the lungs and stomach’. She noted that between 1894 & 1905 a total of 24 muntjac were imported and turned out into the woods, where they have done well. It is thought that some of these animals made their way ‘into the wild’. Since that time other releases or escapes have occurred, for example, from Whipsnade Zoo in 1921.

Since that time the population of the muntjac has increased dramatically. The effect that these animals have on woodlands is serious and significant – we are paying the price of Victorian interest and curiosity.

For an overview of deer in the UK, see our blog entry on the topic.

For Jamie Hodgson
Jamie, If the deer you saw was as tall as your Mastiff, you have probably startled a Roe Deer, (Munjac are not the only deer that bark). Roe deer are indigenous to the uk and very common through out the country. They are often seen on grazing, agricultural or moorland where it is bounded by woodland. They are very shy and it is better to look for them at dusk and dawn. May and June are the months when they give birth to their young so they will be very much on guard. You could look the deer up on wikipedia. If you think their bark is strange and unsettling, you should here a Sika deer in the rut, it nearly made me run home.

Whilst on holiday camping in Norfolk, we went for a walk with the dog in Sherringham forest one evening last week. And it was eerie enough for us as we were off the beaten track (somehow managed to get lost). This deer type mammal came from nowhere and started barking (?) as it ran into the distance. It freaked us out a little as we didnt get a good look due to the shrubbery around and the speed it went. But it was the size of a very big dog (much bigger than our mastiff). We have had loads of deer encounters here in Cumbria but they are all silent when startled?!?
How rare are these deers and what size are they?
thanks

Very cool. After reading your article, I started doing some research on this type of deer. I found there are minature, giant and asian breeds. They all look different. Thanks for writing the article. I love animals and now have a new appreciation for a deer breed that I never knew about.

What is the smallest deer to ever live?