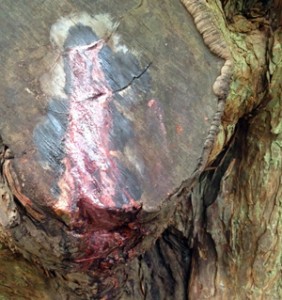 Often one sees sap coming out of an old tree, usually where it is healing up, but usually these "bleeding" areas heal up quite quickly. Recently I came across a most remarkable yew tree when I visited the ancient village of Nevern in Pembrokeshire. It has a 6th century church (St Brynach's Church) and in the churchyard there are a number of ancient yew trees (Taxus baccata). One of these yews near to the gate is called the "Bleeding Yew" which is about 700 years old and here are some photos I took of it. It has a blood-red sap running out of it which has the consistency of blood - though it dries pink rather than brown. I dipped my finger in it and there wasn't any distinctive smell or stain, but as people say that most parts of the yew tree are poisonous, I didn't taste it. 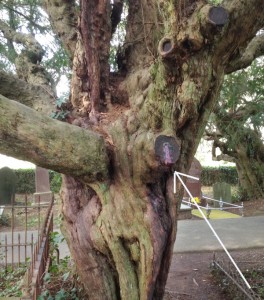 There are many myths about why the Nevern yew tree bleeds: some say that as Jesus was crucified on a cross it is bleeding in sympathy and thoers say that it is reflective of the tree of Life in the Garden of Eden. But that wouldn't explain why this yew tree in particular is bleeding. One myth says that a monk was hanged on this tree for a crime of which he was innocent and the tree is protesting his innocence. Some say, more politically, that it won't stop bleeding until there is a Welsh Prince installed at Nevern or even that it will bleed until world peace is achieved.

The church at Nevern is well worth a visit for the bleeding yew, but also because the church has some stone carvings which are over a thousand years old, such as the "Braided Cross Stone" (pictured here) which, like the bleeding yew, has been ascribed many meanings with two cords apparently being woven together to make the cross. There is an even older carving, the Maglocunus stone, which throws light on the version of ancient Celtic once used in these parts of Wales, called Ogham. This stone wasn't preserved for itself standing vertically but was incorporated horizontally into the church as a windowsill. 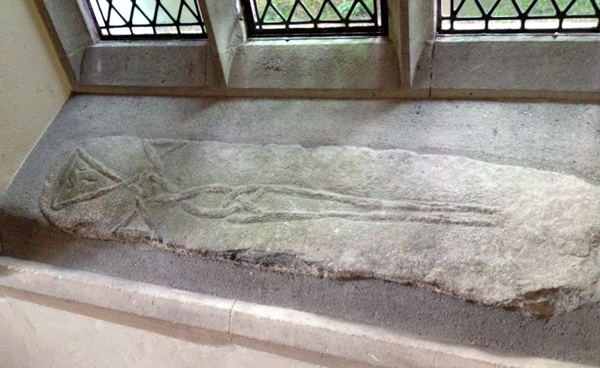 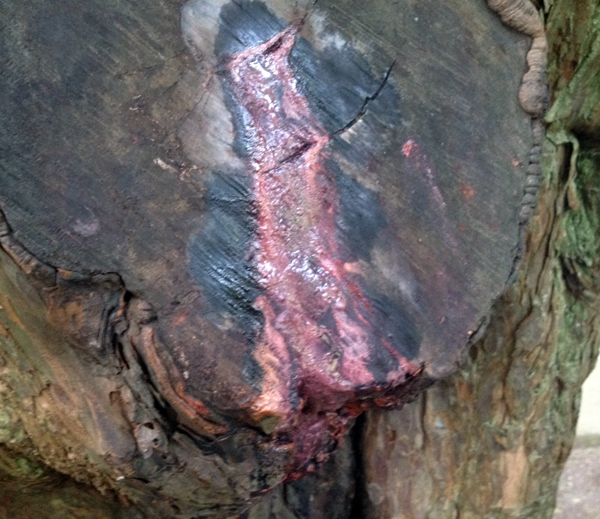 This was our local church for a while. My children were christened there.
My uncle (now 92) was evacuated to Pembrokeshire during WWII from Swansea and remembers the bleeding Yew from that time. HTH

Visited Nevern last week 10/08/16… I found the bleeding yew fascinating and have never seen anything like it….The church yard was atmospheric and very peaceful as was the church….such history!! Thoroughly enjoyed my visit..

[…] of Nevern. We had our afternoon break here before visiting the church grounds where we saw the bleeding yew and the Nevern […]

It was bleeding profusely when we lived at Castle Farm, Nevern, in the early 1950s. A special place.

I found it fascinating that at the weekend of Samhain,the church was decorated with wreathes of Yew as well as flowers. Does the old religion still live here. The land definitely had the feel of a place which had been sacred for a very very long time. placed near running water too.

I and my parents stayed at a farm, I believe above the village of Nevern in the mid 1950s owned by a husband and wife named Thomas, they showed us the old church and also the yew that bleeds.
I as a child of course (around seven I think)got some of the sap on my jumper, when I returned to my school I told everyone about the tree that even at that age I found unusual.
When my parents visited the school for an “open day” my lady teacher I had at the time who’s name escapes me informed my parents that she had been “well informed by Derek about the bleeding tree”!
Oh happy days.

For clarity Nevern is a village not a hamlet because it has a church, indeed the tree stands in the churchyard and yews are associated with churchyards and are incidentally poisonous to horses so not seen in fields.

I visited the bleeding Yew at Nevern about 10 years ago, having read a book called The Holy Kingdom which is all about the Welsh connection with the legend of King Arthur. It is a good read. I found Nevern a very serene place, particularly when you find the ‘Cross of Christ’ jutting out from a nearby rock. The book I read suggested that Christ’s Cross may be buried in the hollow behind the rock. Apparently the Yew tree has bled red sap for several hundred years, according to history books. A romantic would call Nevern the Welsh version of Lourdes. A therapeutic place. It is in the middle of nowhere but I am glad I spent a day wandering around this tiny hamlet.

It’s an interesting one the Nevern Yew – it’s a bit of a family landmark which you would think was a temporary thing but my mother says when she visited it as a child herself it was bleeding back then in the fifties!

If you get a chance to visit look out for the celtic cross in the graveyard – also with ogham on it and quite alot older than my mum!

The branch is bleeding because at some time it was obviously cut and the end grain stresses have manifested as splits. These allow the sap out, especially in springtime as it rises up through the tree.

Seemingly the Yew has been known, and written about, for some time
http://alturl.com/2yext

Doesnt tree sap normally run up just under the bark, not through the middle?