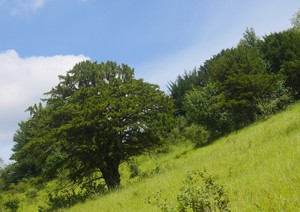 Yew woodland (in Southern England) tends to develop on the thin soils that form over chalk, often on the sides of dry valleys . They can be found along the North Downs, and in West Sussex on parts of the South Downs. Yew woodlands can also be found in the Cotswolds and in the Wye Valley (on limestone). In Ireland, there is a significant Yew wood near Killarney, again growing on top of limestone.

Yew woodland may develop from chalk grassland, when grazing by sheep or rabbits is removed. With no grazing, Juniper and / or Hawthorn start to grow.  Then, between these, shade-tolerant Yew seedlings begin to grow.   Eventually, the Yew will overtake the Juniper / Hawthorn, and shade them out. The dead remains of juniper and hawthorn sometimes may be seen on the floor of a Yew woodland. 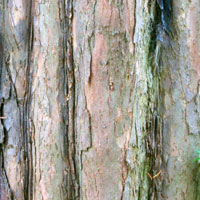 As a Yew tree grows and matures, so its stem / trunk develops a distinctive character. The bark is relatively thin, with a brown scaly appearance, small flakes may be seen along the stem.  With increasing age, the trunk may develop furrows and ridges.   The form of mature Yews is ‘fluid’ and the shape of the tree may be quite dramatic or contorted.

Yew often forms a dense canopy – only ‘broken’ by the occasional Whitebeam and Ash, and little grows beneath it. Beneath such a canopy, the light intensity is poor as is the quality of light – missing are the 'red wavelengths'.  Red light is needed in the germination of many seeds, for photomorphogenesis (the development of shape and form of a plant) and, indeed, flowering needs red light (mediated through the phytochrome system). 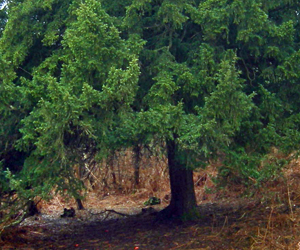 Under such a canopy,  a few seedlings of various trees and shrubs may be found, but their survival is problematic. If a gap in the canopy does occur, it may provide an opportunity for a Whitebeam or Ash.

In some areas or on some soils, a more open canopy may develop which allows for a field or herb layer with dogs’ mercury, spindle, wild privet, and nettles present (even deadly nightshade may make an appearance). The Killarney wood is dominated by Yew with the occasional Holly and Hazel (the soil is quite thin). However, the area does support a rich bryophyte (moss) flora.

Yews are slow growing but notoriously long lived.   Many are hundreds of years old, and some are thought to be of great age. Estimating the age of a Yew can be difficult as they develop hollow trunks, consequently  dating by counting annual rings is next to impossible.  Also, the trunks may fill with aerial roots that grow down from the crown! 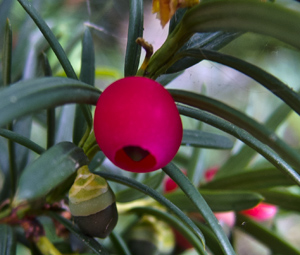 The wood of the Yew has had a number of uses through history and pre-history. The earliest known use is as a thrusting spear from the Hoxnian inter-glacial period, which is many hundreds of thousands of years ago! The burial ship at Sutton Hoo contained a Yew bucket; and Yew wood was much favoured in Norman times for the making of long bows. The use of Yew in bow-making may pre-date this by some thousands of years as evidenced by the ‘Ice Man’ found in the Alps.

Yew wood has been, and is still used, in furniture making and is much favoured by wood turners.

Yew wood makes the perfect longbow as the heartwood makes the spring & puts the power behind the arrow yet withstands repeated compression as the bow is drawn over & over again. The sapwood on the other hand absorbs stress & prevents the heartwood from breaking outward on release. It is a difficult wood to work for a bowyer as it has an uneven grain.

Chris, It was not just in Norman times that yew was favoured for bows, it has been regarded as the best wood for hundreds if not thousands of years – and still is. Members of the Craft Guild of Traditional Bowyers and Fletchers still prefer it – if they can obtain good quality. Sadly English yew is seldom very suitable for bows as it is often twisted, cracked and split, with too many pins – it grows too fast and its annular rings are too spread out. American yew is now used almost exclusively – unless you are lucky enough to get some Italian yew. Even in medieaval times foreign yew from Spain, Italy and Poland was preferred over English yew. The properties which make it so good for bows is the combination of pliable sap wood and a heart wood which compresses well, making it a natural spring with an excellent restitution.