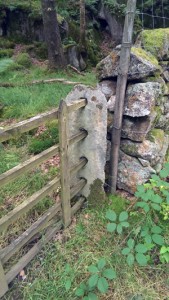 Gateposts usually last a remarkably long time - partly because strong posts are installed securely as tensioning points for fences but also because these posts need to be strong enough to support heavy gates. We have written about renovating stone gateposts before and how to get fittings attached to stone  , but there are lots of different ways of doing gateposts which demonstrate the inventiveness of farmers and estate workers. Traditionally materials used would have been whatever was available, strong and affordable, so in the days of cheap labour stone was often the obvious choice. In order to be effective a stone gatepost would have to be sunk deep into the ground and ways of attaching fences and gates were necessary.

The picture here shows a relatively rare arrangement where the gatepost has holes drilled out to take the horizontal rails of the gate - these are sometimes called "heave gates" for obvious reasons. This arrangement totally avoids the need for hinges but only works where there are deep enough horizontal holes so that the gate can be moved enough to one side to release the rails from the stone gatepost at the other side.

More commonly, stone gateposts have a couple of holes in them which carry the hinges for a swinging gate. These allow a gate to be opened more easily and avoid the need to lift the weight of the gate. The other materials used for gateposts are metal and wood. Metal is becoming fairly standard in farm situations as it is so strong in relation to its weight and can be very flexible in what is attached to it, but it is always susceptible to rust as shown (see image below) at the base of this post even though it was galvanised. 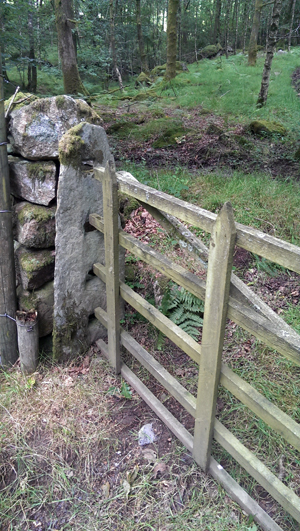 However, for woodland situations gateposts are often made of timber, but strength and durability are still important. In many areas you will see disused railway sleepers employed for gateposts as well as for fence straining posts, because they are made of strong wood which has also usually been treated - seeing these posts is even today very often a clue that a railway was closed in this area or that, as in the picture here, a nearby railway was modernised as wooden sleepers were replaced with concrete ones, and farmers recycled the surplus railway sleepers (image below).

Woodlands also provide a ready supply of gatepost material from trees and in the South East of England posts are often made from the larger stems of sweet chestnut coppice. Some hardwoods are rarely used for gateposts because of their tendency to rot such as beechwood. Throughout the UK the preferred hardwood for gateposts is oak. Where oak is used it is vital that it is mainly heartwood as this is most resistant to rot and to beetles, so you will often see an oak beam which has been split or cut longways. In terms of how deep to dig a hole for a wooden gatepost, you will usually want to put it in at least three feet deep because it is subject to leverage from the weight of the gate and it needs to hold firm even when the ground is sodden.

Some gateposts are obviously doing more than just holding gates and fences and are put up partly as a physical statement - maybe to show that they mark and important entrance or that those who enter need permission to enter. Examples of such gateways are common in estate woodlands or in entrances to drives. Where you have to replace a gatepost it may be worth considering whether you can put in a posts that will last many decades and that are in keeping with the woodland - sometimes you will find some old disused stone gateposts in the woodland which can be reused or you could look at getting new gateposts made specially. 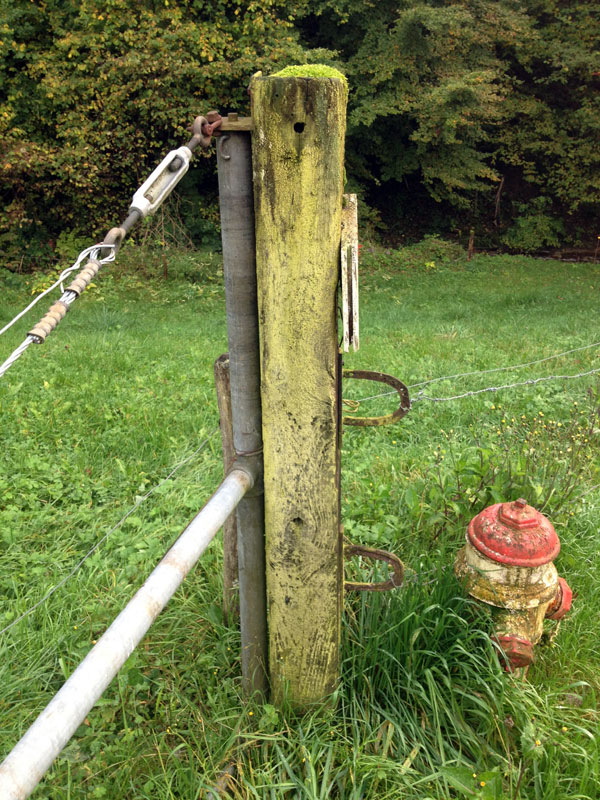 Gatepost made from an old sleeper 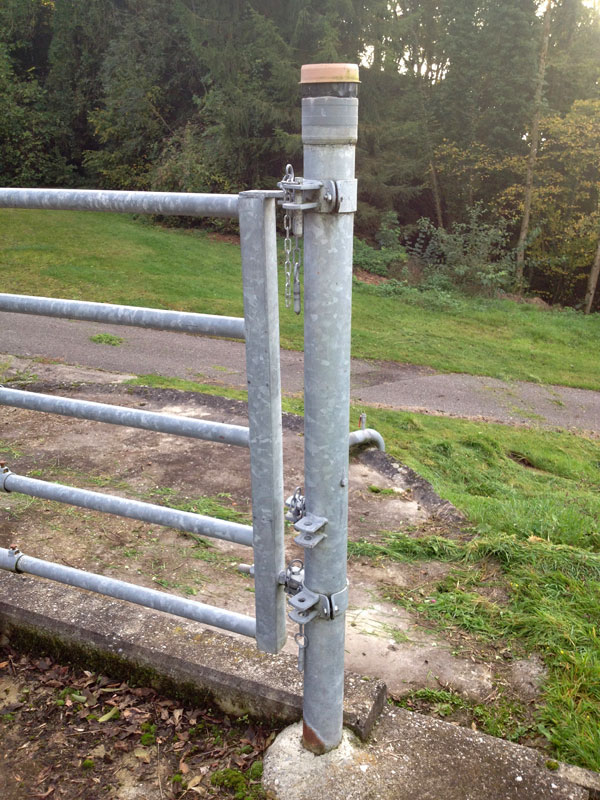 Modern galvanised steel gatepost (but note rust at base).

In our wood and the local environs, old gate posts are cast iron. Bearing the ‘Blaenavon’ logo, as our wood is within the area leased by the original partners from Lord Abergavenny, who went on to set up the Blaenavon coal and iron co. we also have cast iron land marker posts as well, with some particularly fine GWR posts, and a fantastic M R and C Co one for the brecon and abergavenny canal, , and Blaenavon posts- still doing their job several hundred years after the great companies ceased to exist. Its nice to be able to sit in the wood and imagine that in the 1800’s everything that Blaenavon ironworks produced, went through our wood and down the front of the mountain to the canal, and then Newport and the world. I often have a quiet cuppa and imagine the charcoal burners making charcoal in our wood, loaded back up the inclined plane to the horse drawn tramroad at the top of the mountain, to keep the mighty furnaces fed 24 hours a day. Producing cast iron that is as good today as it was when it was made 300 years ago. Alas the gates for the posts have long since disappeared, but its a nice thing to see in the wood. Love the horse shoes on the wooden sleeper.

An extremely interesting article. Many years ago, as an agricultural trainee, we would cut the post for at least 3′ underground, then cut the holes for the hinges. Finally, pre-installation, we would soak the post(s) in a large drum of creosote, up as far as the lower hinge, at least 48hrs, before leaving ’em at least the same to drip-dry. Best dropped into a hole twice the diameter, and back-filled with a dry concrete mix of 4-2-1. That gives an adequate counter-balance, and is also weather-proof.