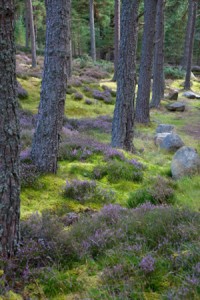 The Caledonian forest / woodlands represent a unique ecosystem in the British Isles – they are remnants of the vast wilderness that once existed here; and across on the Continent – as  boreal coniferous forest. These forests and woodlands are populated particularly by the Scots Pine (Pinus sylvestris).  One of the larger tracts of this native pine forest is the Black Wood of Rannoch. In such woodlands, the shrub layer is restricted, perhaps limited to the occasional juniper, whilst the ground layer is not far different to that of heather-bilberry moor.   Heather is always a dominant plant of the ground flora, but mosses may make a significant contribution to this layer.   Other plants such as cowberry, crowberry and common cow wheat may be found and rare species such as the Twinflower Linnaea borealis – a boreal member of the honeysuckle family.

Such woodlands and forests are the home of some very rare and unusual wildlife species.  Mammals include the wildcat, the pine marten, red squirrel, and mountain hare,  bird species may include the capercaillie, golden eagle, wood sandpiper and black grouse.   In the past, these areas also supported the wolf, lynx and bear.  In recent times, the European Beaver has been re-introduced.

The Caledonian Forest is now cherished and protected – much lies within the Cairngorms National Park, though the Forestry Commission and organisations like the RSPB also control areas of this unique forest / ecosystem.

On the Balmoral Estate is Ballochbuie Forest – which is a special area of conservation as designated by the EU Habitats Directive.  There is also Glen Affric - a National Nature Reserve and now protected as one of Scotland’s outstanding natural environments. It is also part of the programme to 'recreate' a much wider area of Caledonian Forest : partners in this project are Trees for Life, : www.treesforlife.org.uk

I know that there are many charities and organisations working to bring the Caledonian forest back to its former prime, but does anyone actually know what its conservation status are?
i.e. Endangered, threatened, least concerned?

A good read here. The Caledonian forests need to be protected & the more that people are made aware of the woodlands diversity the better. Whilst on holiday in Scotland I bought Jim Crumley’s book THE GREAT WOOD. It is a wonderful & inspirational book & it has even made me book a holiday there next year!