A recent study by Plantlife has shown that Junipers are disappearing from the UK countryside. Juniper is one of our three native conifers, the other two being Yew and Scots Pine.

Juniper was once valued as a source of firewood and the oil from the berries was used in the making of gin (now much of the oil is imported from Hungary). This usage ensured a reasonable turnover of the trees. With changes in land management, grazing patterns etc many of the Juniper trees are now old. There are not enough fertile, female trees (Juniper is dioecious) to ensure berry and seed production. 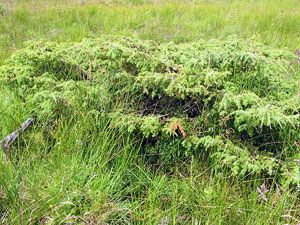 The seed takes two summers to ripen and once in the ground, it may take two years for it to germinate. Throughout this time, the seed is at risk of being eaten by voles or insects. (n.b. Juniper can be propagated by hardwood cuttings.)

As there is concern about Juniper, a species action plan has been formulated. Further details on Juniper and its distribution may be found at Plantlife as can advice on the management of uplands for Juniper.

[…] ‘berries’ are not, in fact, berries but cones.  Juniper is a conifer (the other two native coniferous tree are Scots Pine and Yew).  Whereas the cone of […]

[…] today.   These early forests and woods would be characterised by pine, birch, aspen, rowan, juniper and perhaps oak.   At one stage, it is thought that such forest / woodlands covered some 15,000 […]

I really do not know what type of junipers you have in England,but if all junipers are related then I would say that they have been around for much longer than animals have been and I doubt that they really need hoofed animals to help them propagate.In my country, Romania ,the only places experiencing juniper degradation are those where cattle,horses and sheep are allowed to graze as they tend to eat them or stomp them destroying them for good.

Apparently one reason for the decline in Juniper (since the 60’s) is the changes in agriculture – the loss of cattle and horses. Hoofed animals cut the turf or soil, creating suitable sites for juniper germination – sheep do not do this. Does anyone have any other views on why there is such a loss of Juniper in our countryside?