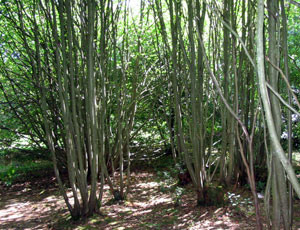 Just about everyone now believes that climate change is happening, that this is due to an increase in greenhouse gases (GHGs) in the atmosphere, and that we are the main cause. The most important GHG is carbon dioxide and trees have a key role to play because they capture CO2 from the air during photosynthesis and store carbon as they grow.   Between 15% and 30% of a tree (by volume) is carbon, the figure depending on wood density and moisture content. After felling, carbon continues to be locked up in wood products and is eventually returned to the atmosphere through decay or combustion.

Forests are vital in the global struggle to contain climate change. It is estimated that around 20% of annual GHG emissions are caused by de-forestation, and tree planting projects in developing countries are encouraged under the Kyoto protocol. But what are the implications for woodland owners in the UK?    This note looks at some of the key issues and makes suggestions on how owners can improve the carbon performance of their woods.

Carbon in Trees and Woods

Carbon is stored in trees, woodland vegetation and soils. In most UK lowland situations the largest of these stores is the tree itself, including leaves, branches, stems and roots.   A mature broadleaved woodland might contain around 200 tonnes of carbon per hectare (80 tonnes per acre) in above ground biomass.   Where the woodland is long established the soil might contain as much carbon as the trees and on peaty soils the amount of carbon can be even greater.

The total amount of carbon stored in wood products (mainly in houses) in the UK is estimated to be around 80 million tonnes, which represents around half of the amount stored in UK forests.    What is important is the longevity of the wood product – an oak beam can lock up carbon for several hundred years.    A further benefit of wood products is that they can substitute for materials such as concrete, brick and steel which have much higher embedded energy (the amount of energy that was used in their manufacture). And using wood as a renewable fuel, replacing fossil fuels, has significant carbon benefits provided the woodland is sustainably managed. So is it best for woods to be managed?  An unmanaged wood, left to its own devices, will tend to have higher amounts of carbon stored in the trees than a wood where thinning and felling takes place.   But you have to account for the amount of carbon that’s going to be stored in the wood products, and the reduced carbon emissions through material and fossil fuel substitution.   Fuel used in woodland operations such as harvesting and transport also have to be taken into account.   While there is no simple answer, it is fair to say that the carbon gains associated with a well (sustainably) managed wood will be greater than for an unmanaged one.

Given the above, here are some suggestions on improving the carbon performance of your woodland:

Would you like to know more? Sandwood Enterprise offer a woodland consultancy servicespecialising in carbon accounting.

Recently our local woodland was cut with the prospect of being replaced with heath land habitat. Some of the trees cut were obviously planted as a cash crop but others because of their roots were self set.

I was surprised that heath land could possibly capture the same amount of carbon as a woodland which had been planted 50/60 years ago and some other trees over 100 years old. Is there any information on the phenomenal ability of heath land to capture carbon?

[…] and are vital in our climate-change defences: timber buildings constructed from local wood are energy-efficient and capture carbon; the energy provided by logs and pellets is fully renewable; woods are important in protecting […]

Thanks for your interest Tracy. Provided the woodland is sustainably managed, woodfuel is near to being carbon neutral. CO2 is emitted as the wood is burned but that CO2 has been taken out of the atmosphere as the trees grow. Unlike fossil fuels which are irreplaceable, at least in any reasonable timeframe. A small amount of energy is used in producing (harvesting and transporting) the woodfuel, that’s why it’s not quite carbon neutral. The key is sustainable management, replacing the trees that are felled or allowing them to re-grow (as in coppice management). If the trees/woods are felled and not replaced then the management isn’t sustainable.
Sandy

This is a tricky subject. As energy supplies (mostly oil and gas) deplete, we are turning more to burning wood for heat…. how does this effect the carbon emmissions?
Tracy

Excellent, introductory, Keep It Simple Sustainable overview for anyone thinking of purchasing a small wood, with Carbon Conscious Woodland Management in mind.