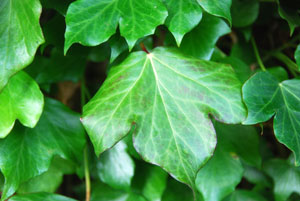 The common ivy (Hedera helix ssp helix) may be found growing in woodlands, hedgerows or on walls. Sometimes it is a climber; sometimes it forms a layer at ground level.It is a woody, evergreen perennial that is distributed throughout much of the British Isles, and many parts of Europe.It can grow in a variety of soil types, and when mature is resistant to many harsh environmental conditions – being particularly tolerant of shade.

Ivy is the only UK member of the botanical family known as the Araliaceae;a family that is more often associated with tropical regions, especially Indo-Malaysia (for further details see Mabberley’s Plant Book). 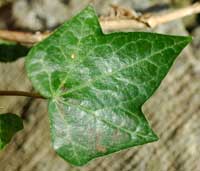 Ivy has distinctive leaves, which persist throughout the winter months.They are described as being palmate (shaped a little bit like a spread hand) with 3 to 5 distinct triangular lobes – see photo.Generally, the leaves have a dark, ‘bottle green’ colour when mature, except around the veins where the colour is lighter; young leaves may be a brighter green.The leaves are arranged alternately around the stems.

If the plant is climbing up a support like a tree or a wall, then where the young stem comes in contact with a surface it forms small, aerial roots; these help ‘bind’ the plant to that surface (see photo). 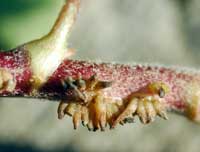 However, Ivy is not a parasite in that it does not take food, minerals or water from the tree that it grows on.  Apart from these aerial roots, young stems may have a downy surface –this can also be seen on the photo. 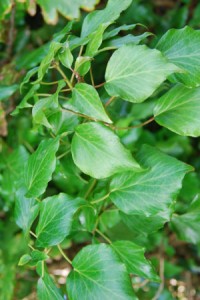 When Ivy reaches the top of a tree or wall or is in bright light, then it tends to form flowers (though late in the year).   The shoots that bear the flowers have leaves that are completely different shape; these are oval or elliptical in shape.The flowers of Ivy are a rather unostentatious yellow-green colour and form late in the year (between September and November).Each has five petals and five stamens, surrounding a centrally placed stigma.The sepals are rudimentary.The ovary has 5 ovules, each one of which may form a seed.

The berry that forms often contain between 3 and 5 seeds (see photo below).  This matures over the winter months, becoming black and represents a source of food for birds (like wood pigeons, thrushes etc) and their young in the Spring.The seeds are often dispersed after their passage through a bird’s gut. 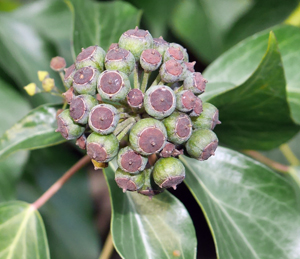 Ivy is said to be responsible for certain forms of dermatitis and skin rash (in susceptible individuals), further details can be found in the Botanical Dermatology Database.Ivy has also been used in a number of ways; see this pdf file about the plants in The College Garden of the Royal College of Physicians. 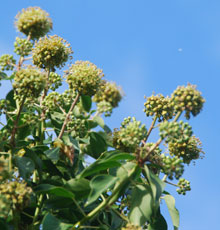 Detailed botanical information on Common and the related Atlantic Ivy (H. helix ssp hibernica) can be found in the ‘New Flora of the British Isles” by Clive Stace and the Plant Heritage site (National Council for the conservation of plants and Gardens) is also a useful source of information.

[…] of the Common Ivy, Hedera helix, can be a source of food for birds such as wood pigeons, thrushes and their young in […]

Woodland ivy should not be allowed in a private gardens. It took the council 2 days to remove the extremely fast growing weed from a fence in our cul de sac. The stems were thinker than my wrist and had forced the 1″ thick x 8″ wood off the concrete pillars and the wood snapped off and had wrecked a panel of a neighbours fence. It travelled across 5 gardens. It had also grown the width of the pavement and had rooted in the gutters. It looks lovely but caused damage to property. I believe its comes under nuisance vegetation. Its a complete nightmare extremely difficult to get rid of. We are surrounded by woods and its up a lot of the trees there! That’s fine but NOT in a private property. I feed bird all the time and have vegetation suitable for a private garden & birds cover.

I don’t know but I would have thought layering would work – see RHS site
i.e. take a young shoot and heap up some earth around it, leave it for a few months, allowing roots to form at the node(s) and then detach from parent plant some time later,
and transplant to …… where you want it.

Hi Chris. can it be possible to take a cutting of a branch of atlantic ivy ?
Many thanks,
Elizabeth.

[…] the lower twigs and branches are said to have more prickles than the those higher up the tree.   Ivy (Hedera) has lobed leaves but entire leaves can be found on the projecting branches (which bear […]

[…] this is interesting though no mention of the […]

Ivy and Insects « Out Doors

Dear Steve,
Interesting question. My personal view is that it’s unlikley to be holding the tree up and given your objectives it should at least be pruned, but the safest thing to do is to consult a professional arboriculturalist/tree surgeon.
You may be interested in this article raises some points to ponder and also gives advice on how to remove ivy if you decide to do that:
http://www.arborecology.co.uk/article_forf.htm
best wishes,
Angus

Chris,
we have this ivy swamping almost every branch of an old Hawthorn tree that is 3-4ft in diameter. Its a grand old tree, and we want to preserve it.

My question is: will the ivy kill this tree, and should we remove it? Or is the opposite the case: the ivy could be holding an old creeking tree up and preventing it from falling over?