Ground Ivy or Alehoof ~ by Chris 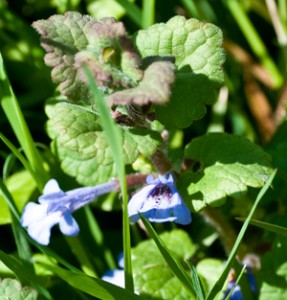 At this time of year, when walking through the bluebells and emergent bracken there is often a small labiate hiding in the herb layer - Ground Ivy.   Like other labiates / members of the Lamiaceae (for example, the dead nettles or yellow archangel), it has square stems and flowers formed from petals that have fused together forming two lipped, ‘open mouthed’, or funnel shaped flowers.  These flowers vary somewhat in colour from blue and violet, through to lavender.

The leaves are a dark green colour (with paler undersides) and are slightly downy; sometimes described as kidney shaped with regular but blunt teeth on the margins of the leaf.  The young / immature leaves may have a purple or deep red colour on their edges. The leaves are stalked (have petioles) and arranged opposite to one another.  The hairs on the leaves and stems can be seen in the jpg below. When crushed, the leaves emit a pungent smell.

Compared to red and white dead nettles, the flowers (and indeed the whole plant) seem quite delicate.  However, ground ivy can spread quite extensively by means of its long, creeping runners; 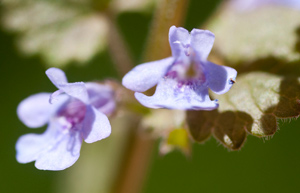 indeed when ‘transplanted’ to New England – it gained the names “runaway jack and creeping charlie” – due to its rapid spread.  It is a perennial,  surviving the winter and frosty conditions.

Settlers took it with them, as in former times it was used in a variety of herbal remedies / concoctions (for eye inflammation, tinnitus, as a diuretic and expectorant) and used in beer making (instead of hops) – hence the name alehoof  = ale herb.

However, Ground Ivy is known to contain terpenoids; that is volatile oils that can irritate the gut and kidneys , so caution is needed. 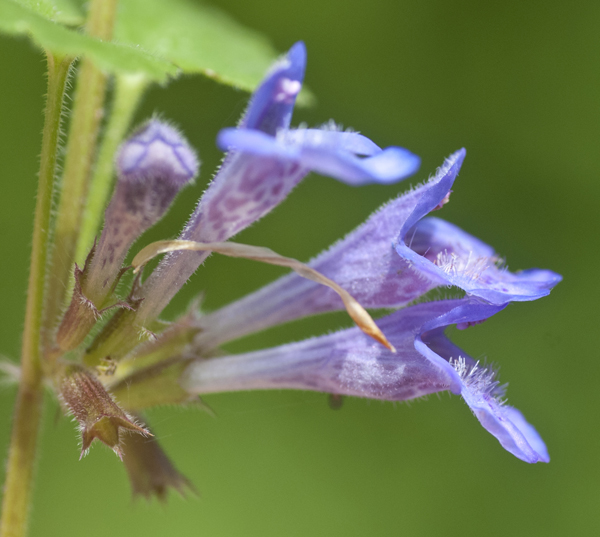