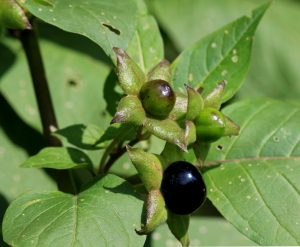 Deadly nightshade belongs to the same family as the potato, the tomato, aubergines (aka eggplants) and chilli peppers - the Solanaceae.  It has a number of common names such as belladonna, devil’s berries or death cherries.  Deadly nightshade is found throughout southern and central Europe but it has been introduced and cultivated outside this area. For example, it was recorded (in 1870) as growing in the apothecary gardens at Malmo in southern Sweden (as recorded in the Flora of Skåne).  In some parts of the world, it has become something of a pest.

Deadly nightshade is a herbaceous perennial, often growing (from a fleshy, white root) as a ‘bushy shrub’. The plant can grow to be 2 metres (6.6 ft) tall. The  leaves are ovate but broad, up to 7 inches in length (see featured image above). The flowers open in June through to August, they are bell-shaped and a dull purple colour (with green tinges). 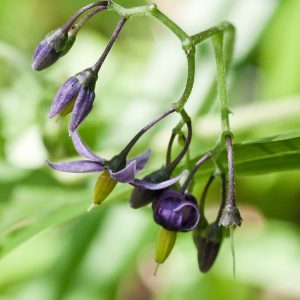 They are not to be confused with those of bittersweet (Solanum dulcamara) image adjacent, another hedgerow and woodland climber - but this has bright purple flowers with contrasting yellow anthers.

After pollination and fertilisation, the ovary forms a fruit, which is a berry.  At first, these are green but they ripen to a glossy, black berry (about 1.5 centimetres in diameter - image above). [Those of bittersweet are red when mature].  The berries have a sweet taste and are attractive to animals / birds. They help disperse the seeds in their droppings, even though the seeds contain toxic tropane alkaloids.  The berries pose the greatest danger to children because they look attractive and have a somewhat sweet taste. The most toxic part of the plant is the root, but the alkaloids are to be found through the plant.  If bees feed upon its nectar, the honey produced will also contain the alkaloids!  Deadly nightshade is one of the most toxic plants found in Europe.

The active agents in deadly nightshade are tropane alkaloids

These chemicals have anticholinergic properties, that is, they block the action of the neurotransmitter - acetylcholine,  in the central nervous system. The effect of this is that the smooth muscle tissue of the gut and bladder is affected; heart and breathing rate are also affected, as are memory and learning.  The symptoms of poisoning with deadly nightshade include

The plant is also toxic to many domestic animals, but cattle and rabbits can eat the plant with seeming impunity.

The alkaloids can, however, be put to good use.  Belladonna has long been used in medicine and in cosmetics.  Drops prepared from the plant were used to dilate women's pupils, an effect some considered to be attractive.  Atropine, one of the alkaloids is used for examination of the eye, it is also used as an antidote for organophosphate poisoning; scopolamine can be used in the treatment of gastro-intestinal complaints and motion sickness.

Nightshade, together with Henbame and Mandrake have been linked to witchcraft.

Black nightshade (Solanum nigrum) is not totally dis-similar to deadly nightshade but it has white flowers and the stems are often black or purplish . Its leaves are generally smaller and toothed but it does form dark, black berries.  It is a common annual weed of arable fields and disturbed soil / ground. 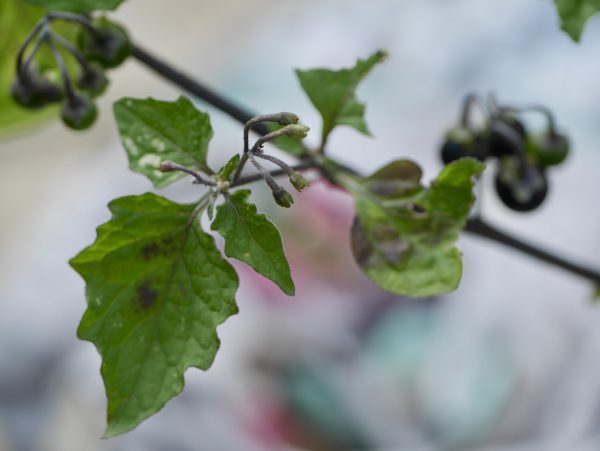 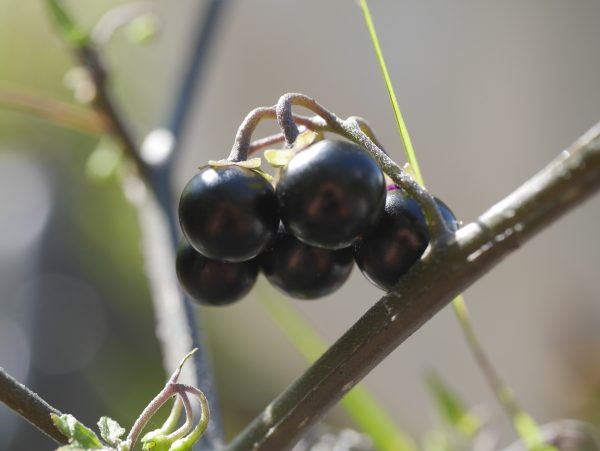 Surely “aubergines” rather than “eggplants”? We’re not in the US, fortunately!