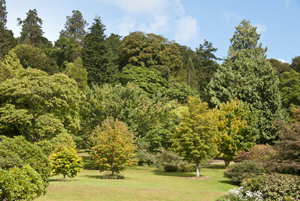 Our woodlands and hedgerows are filled with some twenty or so common or ‘native’ species (oak, beech, birch, ash, pine, holly etc.).  However, if we look around in our parks, gardens, public places and the grounds of stately homes, we can find many hundreds of introduced or ‘exotic’ tree species, or variants of everyday species.

Where have they all come from?  Some of these non-native or exotic species have been with us for a long time.  For example, the sweet chestnut, which various writers have suggested arrived with the Romans.  However, there are more than thirty species of Pine to be found in the U.K. - but only one is native, the Scots Pine (Pinus sylvestris). 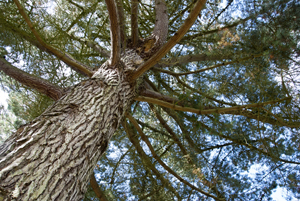 Many of these introductions or ‘exotic species’ are due to the Victorian love of the rare, the different and the unusual.  Collectors trawled ‘the empire on which the sun never sets’ ; indeed all corners of the world in search of interesting plants, bringing trees, shrubs, bulbs and corms home for the great estates, homes of the landed gentry, the developing and extending Botanic Gardens (at Kew, Oxford and Cambridge), and the municipal parks of the expanding cities (Birmingham, Manchester, Leeds etc).

The many species of Pine come from different parts of the world.  The nineteenth century saw a vogue for the planting of the Austrian Pine (Pinus nigra ssp nigra) – this is a larger version of our native pine, but with longer needles, bigger cones and a dark grey bark.  Also introduced about this time were the ‘five needled’ Bhutan Pine (P. wallichiana, introduced in 1823) and the ‘three needled’ Monterey Pine (Pinus radiata, introduced in 1833). The latter grows particularly well in the South West. 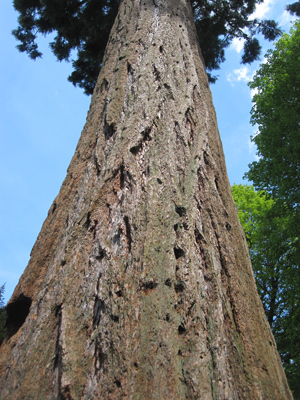 This period also saw the introduction of Wellingtonia (Sequoiadendron giganteum, 1853) from the Sierra Nevada of California.

In earlier times, the Cedar of Lebanon (Cedrus libani) was introduced and enthusiastically taken up by landowners, but it was the Victorians who were the most avid collectors and planters – especially of conifers.  Nurseries such as “Knights of Chelsea” offered hundreds of species or varieties of conifers – not just giants, but also dwarf or prostrate forms for rockeries etc.   It is interesting to note that some introduced species like the Cedar of Lebanon have been with us for 350+ years and though they set seed, they do not spread or naturalise whereas some are spectacularly successful.  One such example is the ‘Great Maple” as John Ray called it, aka the SYCAMORE (Acer pseudoplatanus).  The Romans might have introduced this, but others think that it arrived much later in Elizabethan times.  Its success is no doubt due to its prolific seed production – its paired winged seeds (the double samara). 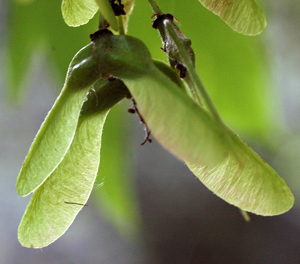 Apart from the introduction of foreign or exotic species, there was also a great interest in ‘sports’ or variants of native species.   One example is the copper beech – with its reddish / purplish leaves; this was known from the C17th but was not planted extensively until the C19th.  Similarly, there is the Dawyck beech, a fastigiate form (tall and thin) discovered on an estate in Southern Scotland.   Most species show variation in growth form (weeping, prostrate, upright) or leaf / flower colour – and these variants have been nurtured and developed by horticulturalists / gardeners / enthusiasts across the years.

snippet from Magazine of Horticulture, Botany and All Useful Discoveries 1835

[…] a thick fibrous bark.  Such trees are usually redwoods – often planted many years ago as an ‘exotic’.   Victorian land owners were quite ‘fond’ of planting unusual species.   There are […]

It is a shame that more importance is attached to exotic species that native ones. This applies to native wild plants as well ( I do not like the word “weed”). I was telling someone of the virtues of the Plantain, regarding it’s antiseptic qualities and healing powers. When I showed her the plant growing, she was obviously disappointed and said, “but it’s just a weed”. We need to start protecting and realising that we need our plants and native trees for the future. I don’t understand why we regard a rare plant as more desirable than a common one. I’ve even heard of common plants described as “thugs”. A rare plant to me is a weak plant.
For the Victorians, plant collecting was to do with status wealth and snobbery. The Rhododendron is a classic example of a disaster. Many were planted in woodland to provide protection for pheasants, but it is a toxic plant that poisons everything around it, even continuing to poison the ground years after it has been destroyed. Although it is present in neighbouring woods to mine, I remove any seedlings I see, especially as I have bees.

An interesting article! How rich & diverse our landscape has become by the introduction of these non-native species!