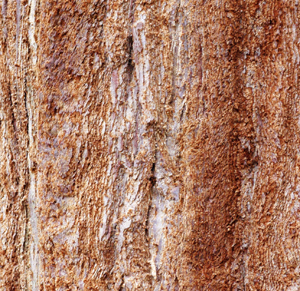 Every now and then, whilst strolling through a woodland one comes across a truly massive coniferous tree - with a thick fibrous bark.  Such trees are usually redwoods - often planted many years ago as an 'exotic'.   Victorian land owners were quite 'fond' of planting unusual species.   There are three species of coniferous trees known as the redwoods – 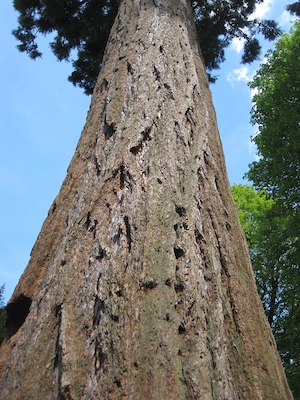 The coastal redwood or Sequoia sempervirens differs from its relative the giant sequoia or Sequoiadendron giganteum mainly in the environment that it needs.  As its ‘common name’ suggests, the giant or coast redwood thrives in the moist, humid climate of the Northern California coast.  Here, the marine fog / mist delivers moisture that is needed for growth. The fog / mist adds water to the soil and helps keep it there by lowering the rate of evaporation.  The tallest tree, Hyperion, is a coast redwood.

The Giant Sequoias (Sequoiadendron giganteum) are generally found at a higher elevation liking the snowy winters and dry summers, growing along the western slope of the Sierra Nevada Mountains, between 5,000 and 7,000 feet in elevation. The bark of the Giant Sequoias is fibrous, thick and furrowed – providing significant protection against fires (for the ‘adult’ trees). The giant sequoias require the seasonal, dry heat of the mountains for their cones to open, releasing seeds.  Periodic fires are also important in the life cycle of these trees.

Fire clears out shade loving species that can inhibit the germination of giant sequoia seeds. Convection curents also bring hot air from the fires into the canopy – which helps the cones dry out and open. The policy of fire suppression (in the early to mid C20th) lead to a build up of ground material; and the low intensity fires, which favour giant sequoias, no longer occurred.   Intense fires threaten the crowns of  Giant Sequoias – so now the National Park Service initiates ‘controlled burns’.

The giant sequoias are shorter than the coastal redwoods but what they ‘lack’ in height, they make up for in bulk, as they can outweigh giant redwoods substantially.  Through sheer volume / mass, the giant sequoias can lay claim to the largest tree in the world - General Sherman.  It stands some 275 feet tall and its base is more than 100 feet wide.   The species was named (in 1853) by John Lindley  (London University)– as Wellingtonia gigantea but the name Wellingtonia had already been used for s completely unrelated plant.  It was renamed and renamed – finally being called Sequoiadendron in 1939. 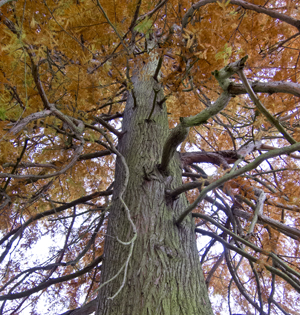 The dawn redwood is another fast growing, coniferous tree but it is native to China; its existence was not known until the 1940’s.  Like the Coast redwood and the Giant Sequoia, it belongs to the Sequoioideae – in the Cupressaceae or Cypress family.  It is the only living member of its genus Metasequoia, though there are three fossil species from the Mesozoic era – it is sometimes referred to as a ‘living fossil’ as it is form appears to be unchanged (aka : morphological stasis) from its ancestors, some 65 million years ago.

These three species are now grown as specimen trees in many parts of the world, though all are endangered or vulnerable in their native habitats. 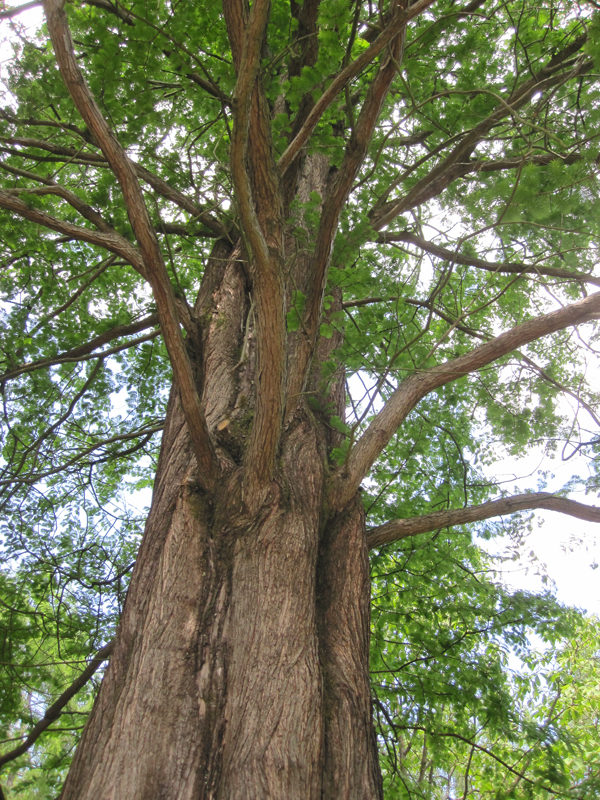 […] Lignin is found in all the woody tissues of a plant / tree but specifically the water conducting tissue of the xylem; its plays a pivotal role in a plant’s ability to grow – in some cases reaching great heights as is the case with the giant redwoods. […]

We have a solitary Coast Cedar (Sequoia Sempervirens) in our wood near Goudhurst. I would love to know when and why it was planted where it is. I had read somewhere that saplings started coming back to the UK from the US in the 1880s and a number were planted to commemorate the Duke of Wellington at his death. We reckon ours is at least 100 years old. Since owning our wood we have planted another 6 Seqouias of the same species and all are doing well, but slowly !

The California Redwood is indeed thriving in the US. Although, only a small percentage of the original old growth survives, nevertheless – considerable areas are managed as commercial forests. It seems that those areas of commercial redwood have a more secure future, where the long term goal is for timber production.

Whereas in other areas the development of commercial vineyards and division of forest areas into housing lots increases the fragmentation of forest areas. The “save the redwood league” has a history of working with the commercial forestry sector , and developments have been made to develop 2nd or 3rd growth forest to grow old growth characteristics. But alas, the US taxation system is a dis-incentive to having long growth rotation.

There are quite a few redwood forest areas in the UK. Currently considerable areas are being planted with Calif redwood in New Zealand