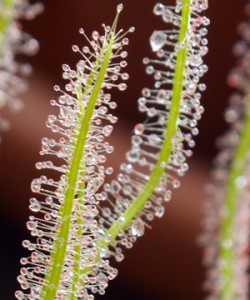 Generally, speaking plants obtain the nutrients that they need from the soil - through their root systems.   However, some soils are low in particular nutrients (especially nitrate - the source of nitrogen needed for organic compounds like amino acids and proteins).  Some plants have ‘solved’ this problem by being carnivorous - feeding on / digesting small arthropods, such as spiders (arachnids), beetles, ants, flies etc (insects).

Some carnivorous plants, such as the sundews (Drosera sp.) catch insects with the sticky glands on their modified leaves.  Their name refers to the glistening drops of sticky mucilage on the tip of each gland (see featured image). Small insects are attracted to the plant and when they come in contact with the sticky mucilage they find it difficult to escape.    These glands or tentacles can move and help further entrap the prey.  Sundews generally grow in moist or wet habitats, with acidic soils but do ‘like’ plenty of light.

Perhaps the best known of the carnivorous plants is the Venus Fly Trap (Dionaea muscipula), often to be seen on sale in garden centres and a source of considerable fascination to children.   It is thought that the Venus Fly Trap evolved from a form of Drosera - a sundew. 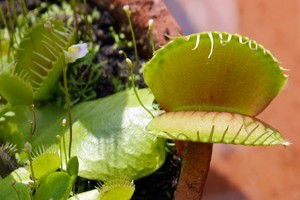 The snap trap employed by the Venus Fly Trap allows them to catch bigger insects (more nitrogen compounds).   The ‘snap trap’ is formed from a leaf - it has two lobes, which hinge at the midrib (see adjacent image and that below).  The lobes often have a reddish / pink colour due to the presence of anthocyanin pigments.  The edges of the lobes bear stiff ‘teeth’ which stop the insect from escaping when the two lobes snap together. Each lobe bears three sensitive ‘trigger’ hairs (trichomes) that register when possible prey is present.  Below the lobes is a flat, leaf-like photosynthetic structure.

Rainer Hedrich and colleagues at the Institute for Molecular Plant Physiology and Biophysics, Würzburg, Germany have been investigating the closure mechanism of these snap traps.   It would seem that Venus fly trap "counts" the number of times a struggling insect touches the trigger hairs.  The research team recorded the impulses / electrical signals generated by these hairs and also measured various changes within the plant.  One touch ‘primes the pump’, i.e. sets the trap ready to go.  Two touches cause the lobes to close around the prey, and further struggles cause an increase in the hormone - jasmonic acid; and the glands on the leaf surface to begin the production of digestive enzymes.  If the insect is large and the hairs are stimulated repeatedly then proportionately more of the digestive enzymes are released.  The process of digestion (by proteases) takes several days - at the end of which, only the husk of an insect's  exoskeleton only remains. 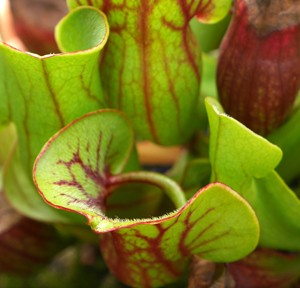 A different mechanism is employed by our other carnivorous plants - pitfall traps.   Plants that belong to the Genus Sarracenia and Nepenthes make use of this ‘technique’.   The pitcher is made from an entire leaf in Sarracenia sp., and the terminal part of a leaf in the case of Nepenthes sp.   Insects are attracted to the cavity of the pitcher by ‘bribes’ of nectar or colours (from anthocyanin pigments) and then ‘slip’ on the rim and fall into the fluid within the pitcher.  The rim surface is coated with loosely attached wax scales, which cause the insect to lose its footing ( electron microscopy by Juniper and Burras, New Scientist).  The body of the insect / spider is then gradually ‘dissolved’ (possibly through bacterial action or by enzymes produced by the wall of the pitcher).  Amino acids, urea, ammonium compounds and other nitrogenous compounds are then available to the plant.   Like other carnivorous plants, they grow where the soil is poor in minerals.

Though spiders and insects are the usually victims of these plants, they are reports of mice and frogs being caught in some of the tropical pitcher plants (e.g. Nepenthes attenboroughii). 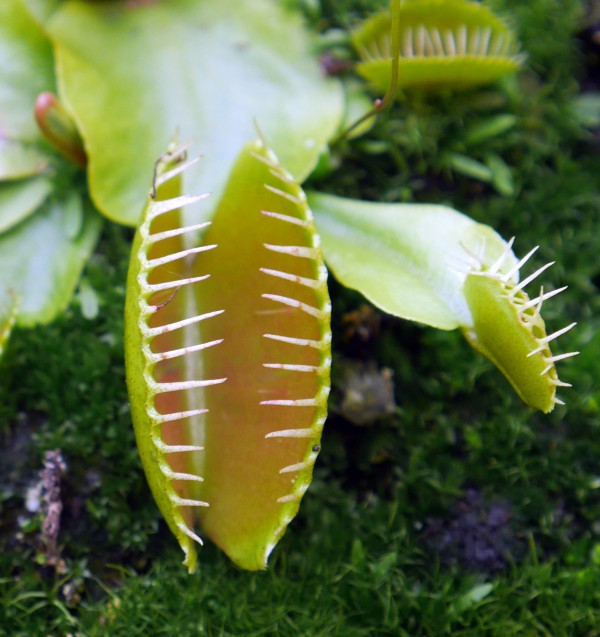 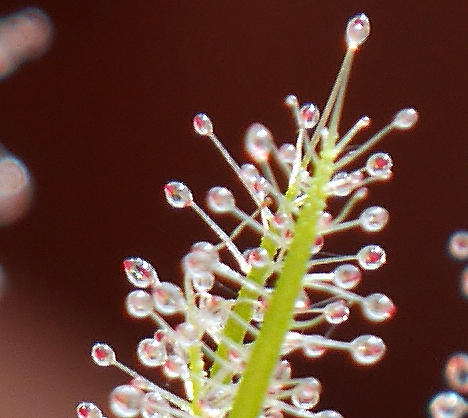 Perhaps have a look here
https://www.gardeningknowhow.com/houseplants/sundew/growing-sundew-plants.htm

I have a sundew plant but no sundew. It is thriving, lives in a window ledge pot and in rainwater. Does it have ‘seasons’ and will he sundew re emerge??

The pitcher plant even has a hunting mechanism. Its insides are usually slippery and wet, but it turns the wetness off during the day. This way by-passing scout ants will find its delicious bait sap. Soon after the ant will return to its tribe and “tell” them what it found via chemical signals. In the meanwhile the plant will switch on its slippery trap again and when the collector ants come to retrieve their loot they get trapped and digested! It’s fascinating as it is scary.