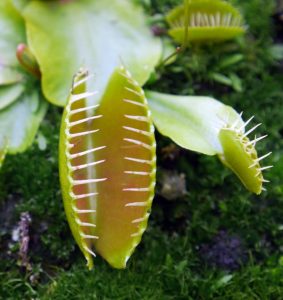 The Venus flytrap (Dionaea muscipula ) is a carnivorous plant found in  the wetlands of North and South Carolina in the United States.  The Venus flytrap is also popular as a cultivated plant and an 'object of interest' and can be found in many a garden centre.

In the wild, the fly trap is found in areas with nutrient-deficient soils (often low in nitrate and phosphate).  The plant makes up for the ‘edaphic* limitations’ by trapping and digesting insects (and spiders) in their specialised leaf traps. By doing so, they are able to extract nutrients such as phosphorus and nitrogen which are in limited supply in the soil - from the bodies of their prey.   The ‘Dionaea diet’ is, in fact, 33% ants, 30% spiders (which are arachnids - not insects), 10% beetles and 10% grasshoppers - only a small percentage are actually flying insects.

Dionaea catches its prey with a trap, formed from the terminal portion of each of the plant's leaves.  The trap is triggered by tiny hairs on the inner surfaces of the trip. When an insect or spider crawling along the leaves contacts a hair, the trap prepares to close, snapping shut only if it is stimulated again within approximately twenty seconds of the first stimulus. 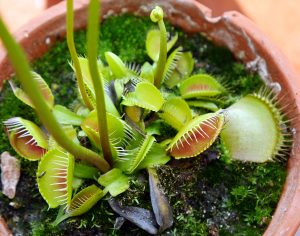 Recently, it has been shown that the Venus flytrap captures insects for more than just nutritional purposes.   Research  by Prof. Dr. Heinz Rennenberg and Lukas Fasbender from  the University of Freiburg has proven the plant also extracts energy from its prey.   It had been assumed that energy production played no part in the process because it was thought the oxidation of sugars (from photosynthesis) was sufficient for the plant’s needs.

The research team placed drops of a solution ‘laced’ with an amino acid - glutamine into the leaf traps of the plant (to simulate prey).   Amino acids are the building blocks of proteins.  They used a special but stable form of carbon [13C]  (it differs  from 12 C due to its higher mass) to ‘label’ the carbon atoms in the glutamine. Then with the help of an infra-red laser, they were able to show that the heavier 13C atoms 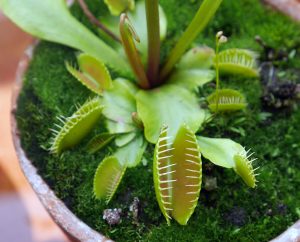 from the glutamine (= prey of the plant) occurred in the carbon dioxide that the plant produced.  This labelled CO2 was produced about one to two hours after absorbing the glutamine / feeding on the prey.

The plant uses some of the sugar that it makes in photosynthesis to begin the digestive process and to access nutrients. Then to maintain the process of digestion, it gains more energy by oxidising the amino acids that it extracts from its prey.   The insects and spiders therefore provide the plant not only with a valuable source of nitrogen but also energy.

Full details in : The New Phytologist

About thirty years ago I was walking with friends on the Howgill Fells, near Sedbergh, Cumbria, UK, and we found a solitary tiny Venus Fly Trap growng very high up on Crook Fell. I wonder if the plant is still to be found up there?