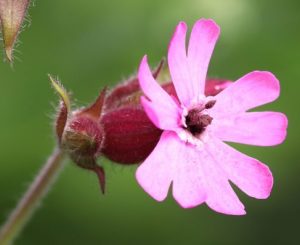 Spring is busting out all over, a time of fresh growth and new life. The past few months have seen a succession of our native woodland flora coming into their own; first woodland anemones then bluebells and primroses and now Ramsons  (wild garlic) and arums like the majestic Lords-and-Ladies or Cuckoo Pint. Amongst all this vibrant colour, it almost seems perverse to let ones thoughts wander to fungi, in most minds associated with death and decay.

Nevertheless, there are whole swathes of species that make their homes on the living tissue of plants. The rusts, for example, are particularly conspicuous at this time of year when such early bloomers begin to die back. Many are specific to one plant, or jump between different species at different stages in their own and their host’s lifecycle. Identify the plant, and most of the time you can identify the rust. 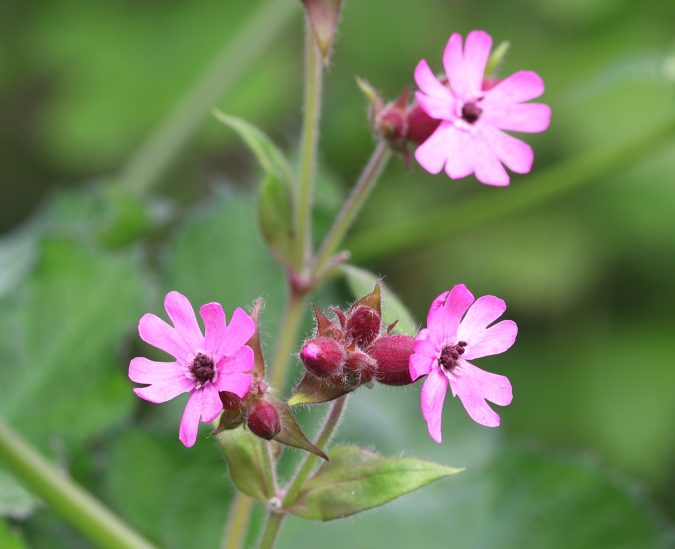 Wherever you find Alexanders, for example, you are likely to find Alexanders Rust (Puccinia smyrnii). Wood anemones play host to Tranzschelia anemones, while the orange circular blotches you can see on the leaves of Lords-and-Ladies (Arum maculatum) and Ramsons (Allium ursinum) are most likely caused by Arum Rust (Puccinia sessilis). In a previous two-part post, I’ve covered Bluebell Rust (Uromyces muscari), that usually appear just before the leaves begin to die back (part one can be read here and part two here), while I’ve also written about Blackberry Leaf Rust (Phragmidium violaceum), and Dock Leaf Rust (Puccinia phragmitis), this latter an example of a species that overwinters in a different form on a different host, in this case Common Reeds.

Rusts are described as parasitic and pathogenic. For certain cash crops, host-specific rusts can cause havoc in commercial monocultures. The examples I’ve outlined above, however, might be considered opportunists whose lifecycles have evolved to fit in with their specific ecosystems. Needless to say, there are many, many species of rusts, and precious few people paying attention to them. 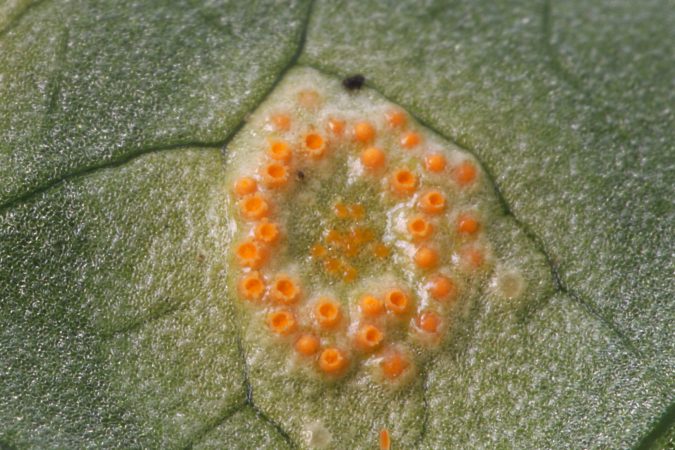 Beauty is in the eye of the beholder: Arum Rust on the underside of an Arum leaf.

This is even more the case of smuts. While some might argue that, for example, the circular arrangements of blisters of Arum Rust have a certain organic beauty, in the Haeckelian sense, few would make such a case for smuts. Rusts target the leaves or other greens part of plants, often manifesting themselves as their hosts die back. Smuts head straight for the reproduction organs – fruits, seeds and stamens.

They are not called smuts for nothing. The name derives from the German for dirt, and indeed, they manifest themselves in thick coatings of dark brown to black spores (teliospores, to be specific, but there’s no need to go into the particular details here), transforming the parts of the plant they grow on into a dark sooty mass. 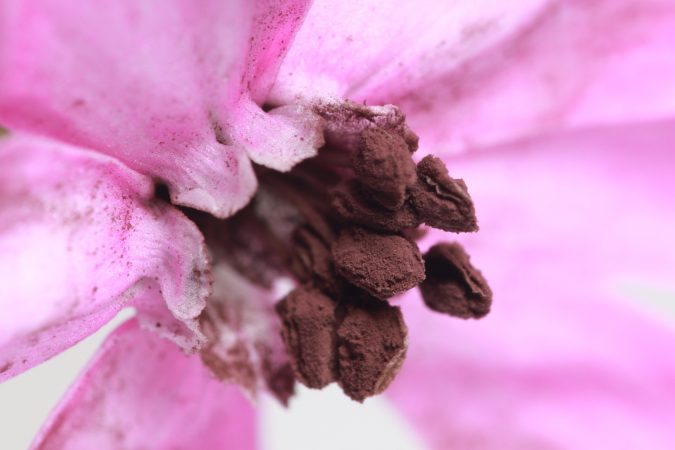 Much of the attention focussed on them is on species that have commercial ramifications (again, like the rusts). Ustilago tritici, for example, affects the seeds of the cereals wheat and rye, and can result in serious crop losses. Unsurprising then that it should be one of the very few species detailed in the pages of Læssøe and Petersen’s Fungi of Temperate Europe. It would be a tough argument to make that smuts present much in the way of benefit to mankind, although it is worth mentioning that in Mexico, there is one species whose presence is more welcome: the Corn Smut (Ustilago maydis) transforms the kernels of maize into a delicacy known as huitlacoche.

However, there are around at least hundred different smut species in the British Isles, and most are as common as the host they grow upon. This month’s Fungi Focus is on the Campion Anther Smut (Microbotryum violaceum), one of the most commonly reported and easiest to find, as Red Campion itself is in itself a very widespread native plant that pops up alongside roadsides, pathways and hedgerows to brighten up the summer months with its pink-red flowers. As should be clear from its name, this smut targets the anthers*, so can be spotted from a distance as the centre of the flowers will be a sooty brown to purplish-black colour (hence the ‘violaceum’ part of its name’) instead of the usual light pink, the stamen and anthers coated with this spore mass. 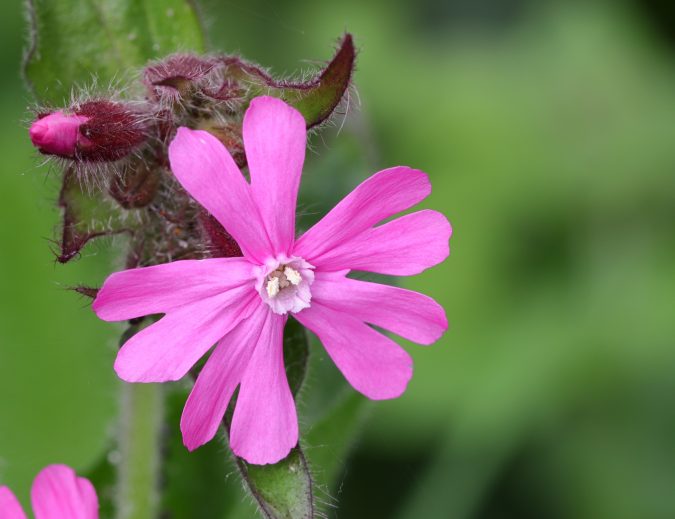 While this smut adds little cosmetic appeal to the flowers, the teliospores do present a certain fascination when viewed under the microscope; spherical and ranging from 6-10microns in diameter, and covered in an intriguing pentagonal reticular pattern. The smut transfers itself to other plants by pollinating insects who would otherwise be involved in aiding the reproductive process of the campion itself. Smuts might be viewed as a sort of horticultural STD.

Nevertheless, the ubiquity of campion flowers at this time of year would suggest that this smut does not have a particularly negligible effect on the fecundity of this particular species. Indeed, from my own observations over the years, it is rarely that present even in areas rife with campion and when it does appear, it is localised to handful of plants. 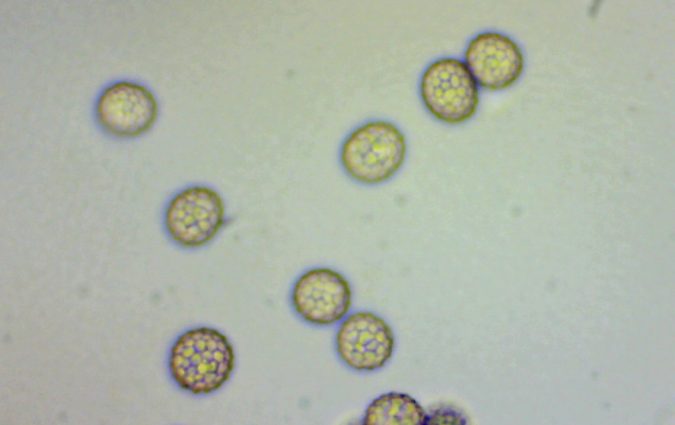 Microbotryum violaceum is one of the more regularly recorded of the smuts that grown on the native plants of the British Isles, and as such one should consider it a native species in its own right.   In fact, more recent investigation has shown just how specialist it is. While I’m still using the old catch-all term for the sake of simplicity, it has been split up to create several more host specific ones: M. lychnidis-dioicae is the new name to describe the smut occurring on the anthers of Red and White Campion; M. coronariae appears on Ragged-Robin; M. saponariae on Soapwort; M. silenes-inflatae on Sea Campion and M. stellariae on Lesser Stitchwort.

But one does have to ask oneself just how many people out there would consider a smut even worth recording. As specialist plant pathogens, individual species of smuts can be considered as rare or as common as their host plants, and with many native plants themselves under threat from habitat loss, their associated smuts suffer accordingly. 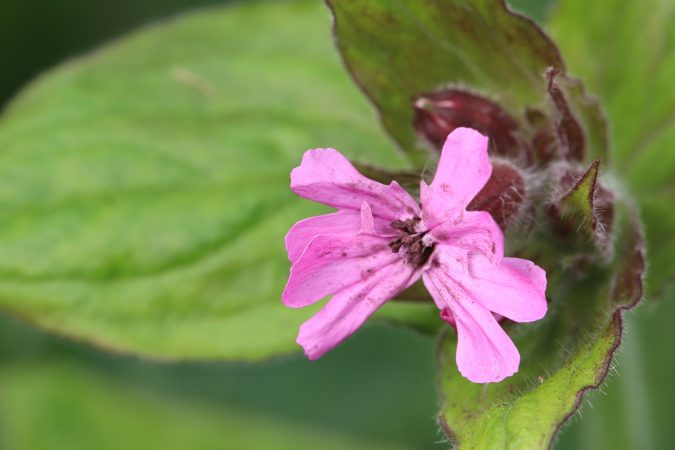 Interestingly, according to a recent publication compiled by Ray Woods, Arthur Chater, Paul Smith, Nigel Stringer, and Debbie Evans entitled Smut and Allied Fungi of Wales A Guide, Red Data List and Census Catalogue (2018), “No smut species are specially protected under the Wildlife and Countryside Act 1981 but a single smut species (Urocystis colchici) found on Autumn Crocus (Colchicum autumnale) is listed on Section 7 of the Environment (Wales) Act 2013 as being ‘a living organism of principal importance for the purpose of maintaining and enhancing biodiversity in relation to Wales’.” The same publication lists the example of Urocystis ulmariae, found only once in Wales on a single Meadowsweet plant, and placed it in the “Critically Endangered D2” category.

The fascinating The Lost and Found Fungi Project, conducted by mycologists at Kew Gardens to investigate whether historically reported fungi species that have not been recorded in recent years are actually extinct or just not recorded, has also focussed on Rusts and Smuts. It is worth a look just as an example that there is some interest in smut distribution and conservation.

One might question the worth of recording, studying or conserving fungi species that so evidently hamper the reproductive abilities of their hosts. As ever, I’d argue in these posts that until the funding and human effort is put into such endeavours, we will never know. 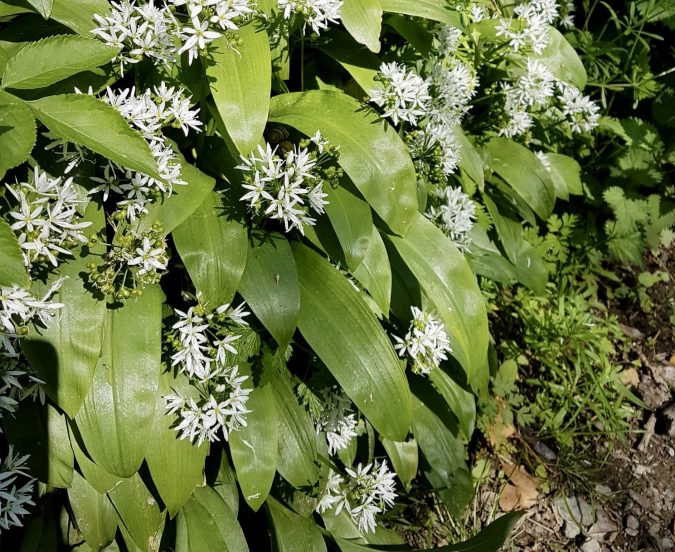 beautifully written…………a paradigm of our language!