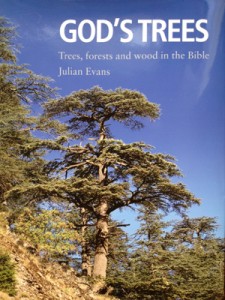 This is the ideal Christmas present for anyone who likes trees.  At only £15, 'God's Trees' is both a coffee table book and an authority on the subject of trees in the Bible.  You'll find out about the trees of all the 'Bible lands' including modern-day Israel, Syria, Egypt, Iran, and Iraq.  It's not just which trees were there but how they were used -  Cedar of Lebanon (Cedrus libani ) for beams in Solomon's temple, Acacia trees for shade in the Negev desert but most widespread were Olive trees (Olea europaea) which produced olive oil for lighting and cooking.  You can do a cover-to-cover read or just dip in for the pictures and captions enjoying the exotic photos, maps and the illustrations by Veronica Pinchen.

One chapter from 'God's Trees' that stands out looks at trees as metaphors for the good things in life.  The idea is that trees are associated with peace, with establishing permanent homes and with prosperity.  Some of the metaphors are captured in the phrase "Tree of Life" or the notion of using tree branches to make shelters.  The Old Testament figure Nehemiah re-instituted the feast of the tabernacle and urged his people to, "go into the hill country and bring back branches from the olive and wild olive trees, from myrtles, palms and other leafy trees, to make temporary shelters". 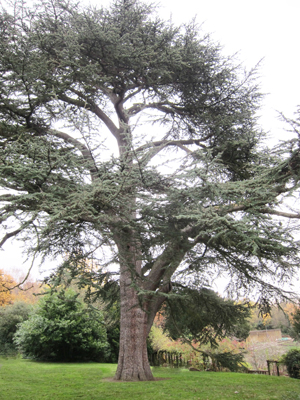 Even if you are not at all religious the Bible is so much a part of our culture that homing in on its trees has relevance to everyone.  Julian Evans who wrote 'God's Trees' is as knowledgeable about trees as anyone I've ever met - having been a professor of forestry, a chief research officer for the Forestry Commission and now President of the Institute of Chartered Foresters.  But he also studies the Bible and is a lay preacher. As Julian admitted to me, "I have woven a bit of my own faith into 'God's Trees' ".

The diarist John Evelyn also wrote one of the most famous early books on trees, 'Silva', in which he points out that "trees and woods have twice saved the whole world: first by the ark and then by the cross, making full amends for the evil fruit of the tree of life in paradise."  Julian Evans explores what sort of wood was used for Jesus' cross of crucifixion and reckons it was probably Cypress wood and he points out the irony that most of the "relics" in Europe recovered on the Crusades or in other times are in fact made from pine or oak - trees that are more common in Western Europe.

By the time you get to the end of the book, you realise just how important trees are to the whole fabric of the bible and biblical times - with towns and places named after trees (Gethsemane means Olive press etc) and, in an age before plastics, wood was the main material for making objects of everyday life (Jesus of course was a carpenter's son), but for my money the best part of 'God's Trees' is the vast array of photos which give the woodland enthusiast an armchair tour of the middle east.  This book is something to put under the Christmas Tree, another of "God's Trees".   You can get the book for £15 from www.dayone.co.uk (01568 613740); or from Amazon .

This book is not available from Amazon