Himalayan Balsam – nemesis is nigh ? 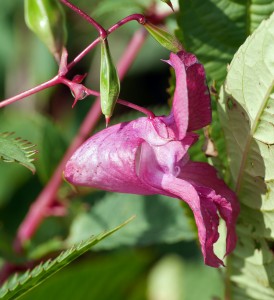 Himalayan Balsam (or Impatiens glandulifera) is a not unattractive plant; it was introduced as a garden plant to the U.K sometime in the mid-nineteenth century. It is an annual plant and probably the tallest annual in the country - growing to heights of six foot. The flowers are somewhat variable in colour from a striking pink / purple to almost white. The shape has been likened to a policeman's helmet - hence it is sometimes known by that name. It flowers from June right through to October - which is quite late in the year; i.e. still producing seeds long after most other annuals. The black seeds form in capsules - which open explosively when mature, dispersing the seeds.

Unfortunately, the himalayan balsam did not stay in Victorian gardens. It spread. It is now found in a wide variety of habitats; waste land, roadside and railway lines, damp woodlands and particularly river banks, where it poses major problems. Its present distribution was probably helped by a number of people - see Professor Ian Rotherham's articles on invasives e.g.  http://www.ukeconet.org ;  quote "We have the stunningly beautiful Himalayan balsam spread along the River Sheaf and the River Derwent in the 1940s by Nobel Prize-winning scientist Sir Hans Krebs".

When the plant dies, river banks can be left devoid of significant vegetation and become muddy and liable to erosion. The mud or silt, when carried away by the river, can affect the spawning grounds of fish. Fish apart, there are other effects - the sheer size of the plants means that other plants are shaded out of existence, or the competition for minerals, water, or space is simply too much for them. There are 'knock on' effects in terms of the the invertebrate populations, insects, beetles, butterflies, spiders etc. 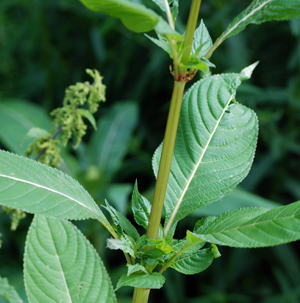 As an introduced species, the himalayan balsam arrived here (1839) without any of its natural 'enemies' - i.e. organisms that either feed on it (insects, caterpillars etc) or parasitise it (fungi, bacteria). Consequently, it has been able to grow and spread without check.

Traditional methods of control (weedkillers / manual removal) are often not very practical because of difficulty of accessing all sites along a river catchment or the area / site may have a high conservation status - so the use of herbicides is not appropriate. It has been estimated that a serious attempt at the removal of the Balsam (using such methods) across the U.K. would cost 300 million.

However, the CABI (formerly the Commonwealth Agricultural Bureau) is allowing the release of a rust fungus that attacks the himalayan balsam.  A rust is an obligate, biotrophic fungus. That is, it is a parasite, which can only survive and reproduce in the living tissue of its host - in this case, the himalayan balsam (link opens a pdf). The life cycle of the rust is complex - and detailed information of the various stages can be found here : http://himalayanbalsam.cabi.org/the-proposed-solution/

Three locations are being used in the trial of this rust fungus -  in Berkshire, Middlesex and Cornwall. It is hoped that this will provide a natural method of controlling the plant (sometimes referred to as biological control), whilst leaving native species unharmed. It may be that the fungus will reduce the vigour / size of the balsam plants - by interfering with the photosynthetic capacity of the plant. Then, over a period of 5 to 10 years, the fungus should spread and bring the Balsam populations under control (link opens pdf), so that they can then be managed or eliminated by physical (it has a shallow root) or chemical means. 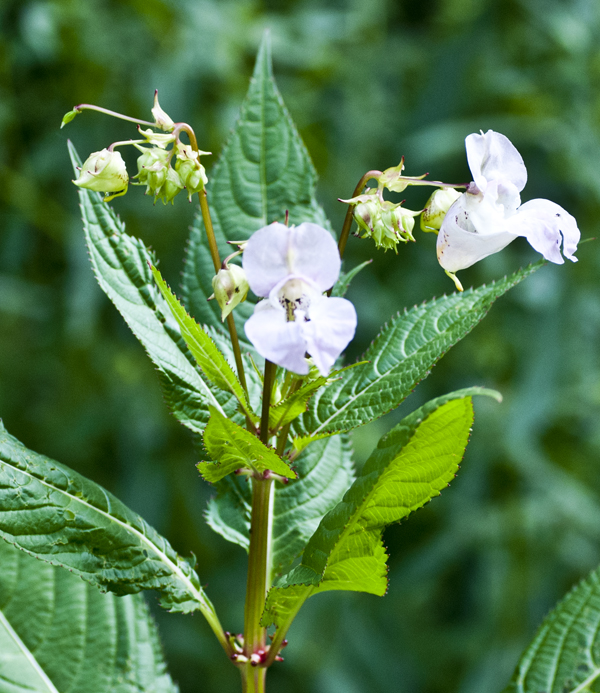 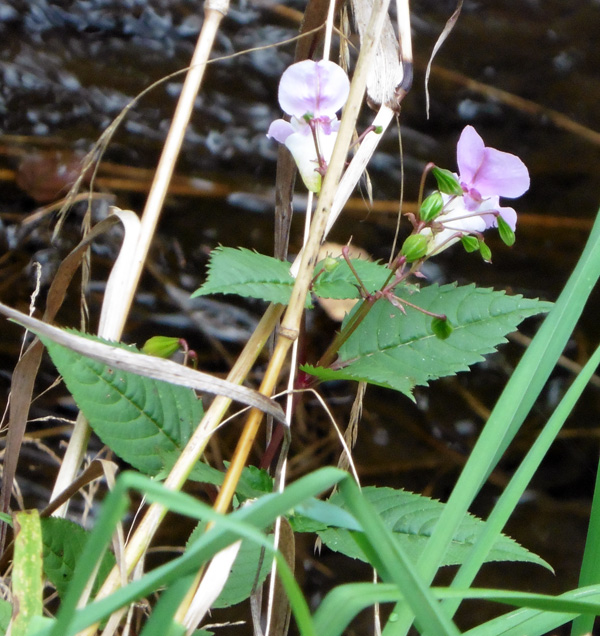 Himalayan Balsam in a favoured location - by a stream.

The seeds of this plant are edible and taste like a pine nut. You can capture them by covering the plant in a large plastic bag and then shaking it to pop the seed pods. Put them in an airtight jar and they should last a few months. You can eat them as they are or dry-fry them for a smokier taste.

Of course, be careful not to spill any seeds on the ground when you are out collecting.

I have grown Balsam in my cottage garden for many years, as did my mother. I allow a few to mature every year but pull out the rest before they have a chance to mature. The Bumbles love them as they are rich in nectar.
Balsam is very easy indeed to pull out, especially if the ground is wet. If it’s done before it seeds, it is easily cleared. In the days when we had working parties to clear river banks. there was no problem. Today people think of spraying everything with poisons, which in the case of Balsam is somewhat ridiculous. I think Rhododendron is far more of a problem and not at all easy to kill. It poisons the ground and is bad for bees to collect pollen from as it causes the honey to be toxic.

The most recent Flora of Cheshire (Newton 1971) includes a preface in which the then-Professor of Botany at the University of Manchester wrote ‘it is encouraging to see that decorative invaders from abroad, such as Himalayan balsam … are now well established’.
Does any botanist now share that view?

As a member fishing club of The Derwent Catchment Group, in Derbyshire. We with other clubs have been pulling balsam and are seeing some results at last.
However it is important that all water owners cooperate to avoid seeds washing down from beats above to maximise the effort.

It has just started to invade this year along the riverbank which borders our 6 acre wood. I have walked up the shallow river carefully pulling every plant up with the roots intact. I then burn them.

I am expecting to have to do this for some years to come!

I have some land next to the Wensum river, just under two acres. I have been pulling up the balsam for three years in earnest this is the first year that I am only pulling up the odd one here and there. I have found that the plant is a great survivor! It must be pulled up by the root. If you leave the root or break the plant it turns to a ‘Medusa’ with two or three heads, and if it lays on the ground it can regrow roots in up to four places where it touches the ground. I think the seeds can survive several years or that is my experiences so far.

More on my blog ‘ianswalkonthewildside’ and my website http://www.ukeconet.org – though it is Rotherham not Rotherman. Lots of free papers and articles to download.