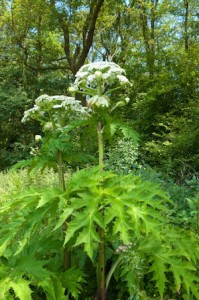 Some plants, like the Himalayan Balsam, Japanese Knotweed and Giant Hogweed are spreading across the country.   Giant Hogweed, also known as wild rhubarb, giant cow parsnip or giant cow parsley is a dangerous plant.  It was introduced as an ornamental plant in the C19th; it is however – phototoxic.  If the sap gets on the skin then photodermatitis occurs – causing blistering of the skin and scarring, and minute amounts in the eyes can cause blindness.

Invasive non-native spacies can displace native species, altering the ecology of various habitats; they might be described as ‘botanical thugs’. One single hogweed plant is capable of producing 80,000 seeds.  Once established the removal of these plants can be expensive and time consuming.  The earlier an ‘outbreak’ or invasion by one of these plants is reported, the easier it is to deal with.

Now, the path of these invasive species can be reported and recorded using a (free) smart phone app – PlantTracker.   This has been produced by people from the Environment Agency, the Nature Locator team at the University of Bristol and the Centre for Ecology and Hydrology.  The app features 14 invasive species, several are aquatic plants : 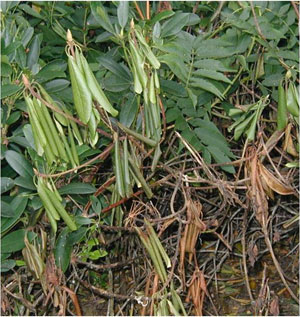 Plant Tracker sightings have already beeen helpful in the removal of local outbreaks of Himalayan Balsam and Giant Hogweed (in the Thames area), and also the Floating Pennywort in the Midlands.  Whilst winter time is not the best time of year to spot and record many of these plants,  January and February are good times to look out for and record the evergreen Rhodendron ponticum.

This is one of several 'citizen science projects' that are being planned - another is BatMobile, which will enable people to identify bat calls using a smart phone.  Also under development are apps for ladybirds, butterflies and aquatic organisms.  The use of citizen science or crowd sourcing  is that it often