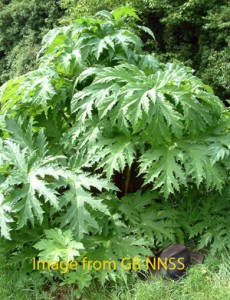 The giant hogweed (Heracleum mantegazzianum) belongs to the same family as the wild parsnip – the Apiaceae. It is sometimes referred to as the giant cow parsnip, or the giant cow parsley or the cartwheel flower. Like the Himalayan Balsam, the giant hogweed is an introduced plant (it comes from the Caucasus and Central Asia). It arrived in the U.K. in Victorian times, being used as an ‘ornamental plant’ – perhaps to add ‘architectural interest’ to gardens.

By the late Nineteenth Century, the Giant Hogweed had spread from the gardens where it had been cultivated, and was to be found ‘wild’.   It is now to be found across most parts of England, and is found on verges, hedges and rough ground. Like the Himalayan Balsam, it is associated with rivers and river banks. The Giant Hogweed spreads by seed, and is dispersed by wind and water (swept along in streams and rivers).

It can grow into a truly massive plant – some 5 metres or 15 feet in height, with leaves (including the leaf stalk) that are some 2 metres / 6 feet in length. The stems are thick (10cm), bright green, ridged and have many purple spots (see images below). The stems also bear many bristles and hairs (at the leaf base).   Though the plant is a perennial (living for 5 – 7 years), the giant hogweed flowers only once and then dies i.e. it is monocarpic. It forms enormous umbels of white flowers – the size of dinner plates, and a single plant may produce from 1500 to 100,000 seeds. Consequently, it can form dense strands of vegetation – particularly on river banks; because of this the Giant Hogweed can displace native plants and reduce biodiversity in a given area.

Like the wild parsnip, the Giant Hogweed is a particular concern because of the risk of phytophotodermatitis – when the sap of the plant comes in contact with the skin (especially so in bright sunlight).   The sap causes itching, reddening, burning and blisters then dark / purplish scars may form that may persist for a long time. Even a very small amount of this sap can do irreversible damage to the eyes.

Because of this toxicity and its invasive nature – the Giant Hogweed is actively removed and the Wildlife and Countryside Act makes it an offence to plant or cause it to grow wild in the U.K. 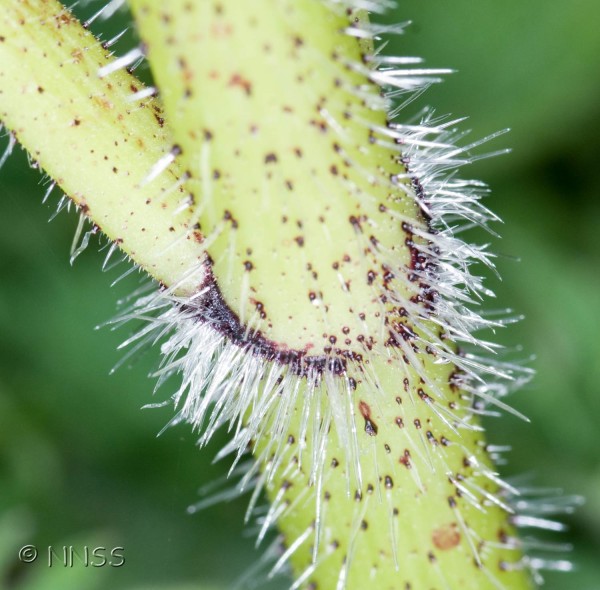 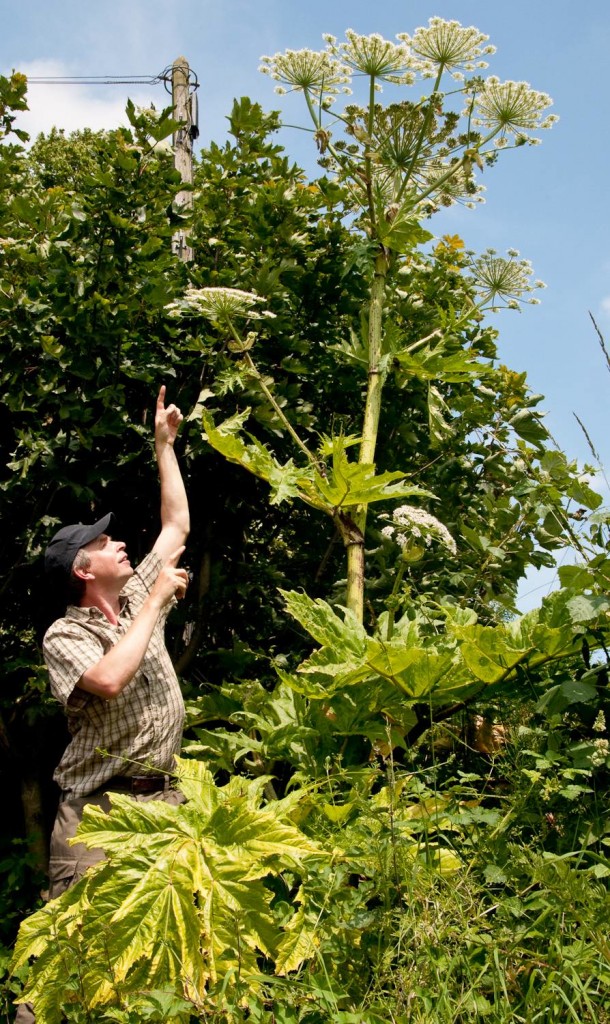 All images courtesy of the GB Non Native Species Secretariat (their gallery) http://www.nonnativespecies.org/gallery/index.cfm

Further information on the control of Giant Hogweed can be found
at
https://www.rhs.org.uk/advice/profile?PID=458

I understand that this is a hard plant to get rid of, is this correct and hoe do you kill it .

the image comes from
the GB Non Native Species Secretariat (their gallery) http://www.nonnativespecies.org/gallery/index.cfm
hence the credit / acknowledgement underneath the image.

Seems a little irresponsible to publish a photo of someone standing so close to this plant with bare arms in bright sunshine. I’ve no doubt he came away unscathed, but is it sending out the right message?