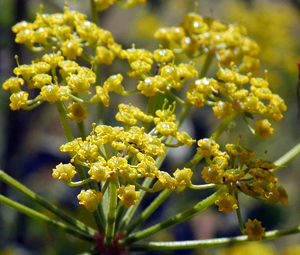 Wild parsnip is the progenitor of the cultivated parsnip; it is a plant of rough, dry grassland and ‘waste’ ground by roads and railways (favouring chalky / limestone areas); it can occur in public parks. The root is edible but the shoots and leaves should be handled with caution as their sap contains photo-sensitive chemicals (FURANOCOUMARINS) such as Xanthotoxin. These chemicals help protect the plant from its enemy the parsnip webworm. However, these chemicals can cause a skin reaction – phytophotodermatitis (more likely on bright, sunny days). This reaction is not dissimilar to a chemical burn – reddening, blisters and burning; affected areas may remain visible for some time. 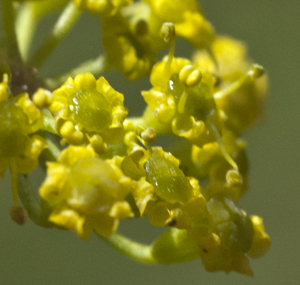 Wild parsnip can be quite massive – up to two metres in height, with many umbels of flowers. An umbel is a cluster of flowers where stalks of nearly equal length spring from a common point and form a flat or curved surface (see featured photo above), characteristic of the parsley family – the Apiaceae. The flowers are yellow / green, and there are 5 tepals (sepals / petals not distinguishable) which curve inward,  and the stamens, which project beyond the flower, produce yellow pollen grains.

The basal leaves are divided into pairs of leaflets, that is, they are pinnate and toothed. In the first year of growth, the leaves form a rosette at ground level but in the second year the stem elongates.   The stems are hollow (except at the nodes) and slightly hairy.  The leaf stalks / petioles wrap around the stem at the nodes. 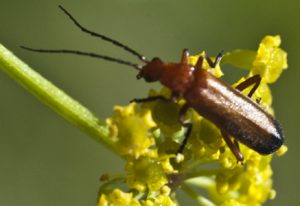 The plant is a source of food for various insects - particularly lepidoptera (parsnip moth, parsnip swallowtail) and it can provide a 'home' to insects such as common red soldier beetles.  They are often found in the flowers / umbels of the Apiaceae (celery, carrot, parsley family), where they are active in daylight - hunting for small insects.  They have long antennae and red / orange bodies.  The larval stage of these insects is to be found in the soil / around the base of long grasses where they forage for snails, slugs and soil insects.  After a pupal stage (of internal reorganisation of body tissues), the adults or images emerge in July and August and the cycle begins again. 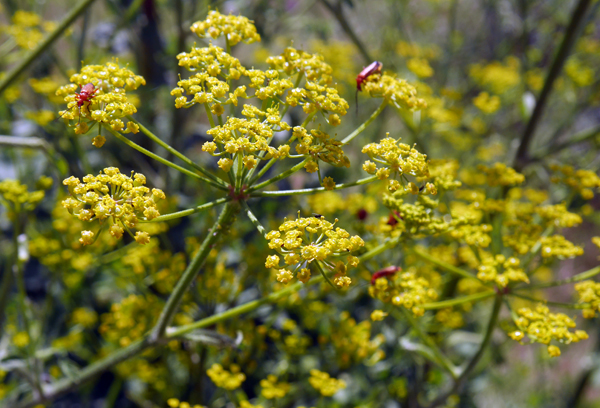 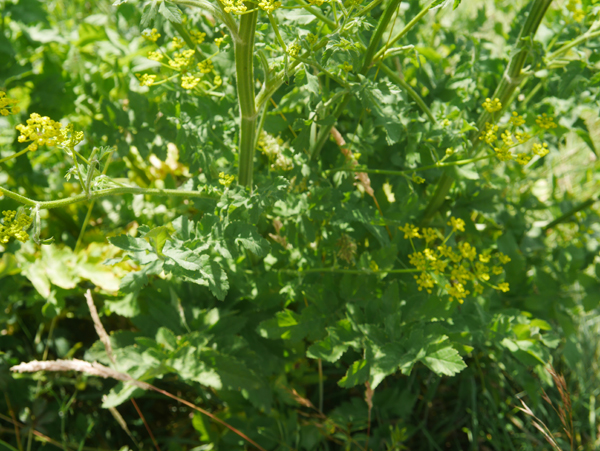 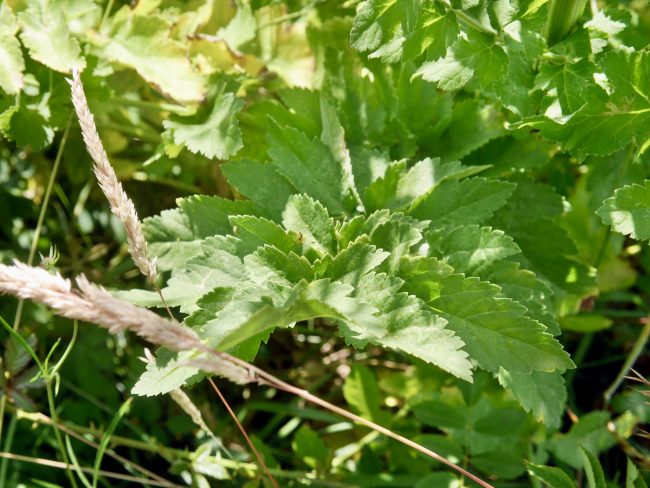 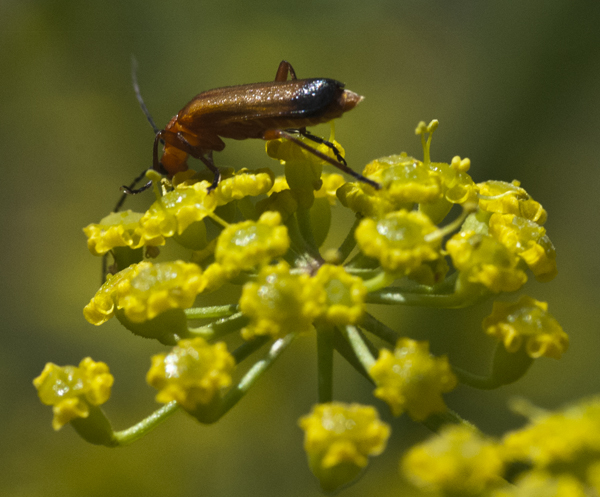 however it’s not normally in flower ??
Pirate leaves ??

Interesting shot of the flower … however it’s not normally in flower and pirate leaves … well that could be any number of plants.
Some images that make identification possible would be a really great addition.

[…] the wild parsnip and alexanders, Fennel and Florence Fennel are umbellifers, that is, members of the Apiaceae (the […]

You are welcome to use any of these images for your safety leaflet.
Chris

Thanks for post your article. We recently had a subcontractor share a picture of some wild parsnip burns.

I am trying to write a safety alert about the risk and I wondered whether you would allow me to use your photographs of the plant to help the guys identify wild parsnip on our projects.

Thanks for that interesting insight – we have such plants in our ‘wildflower meadow’ at work and one or two have webbing but no sign of ‘webworm’ caterpillars; I wait till the flowers have gone over before pulling them and putting them in a corner, so that they don’t spread but on Friday, I didn’t have my gloves and did wonder about any ‘Giant Hogweed’ effect but so far no sign of anything and certainly not like Mrs Miles (mind, I don’t garden in my bikini). The pulled roots smell like sweet carrots and one day I may get round to boiling some up. PH