The effects of nitrogen pollution on our flora 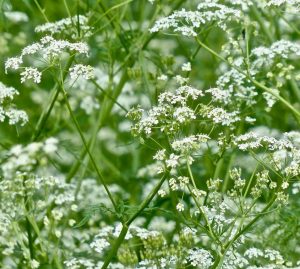 This extra nitrogen* encourages some plants to the exclusion of others.    The beneficiaries of this ˜extra nitrogen' are stinging nettles, brambles, various grass species and cow parsley.    At the moment, cow parsley can been seen springtng up all over the country - by the sides of the roads, motorways, country lanes - displaying its umbels of white feathery flowers.

Whilst cow parsley is not an unattractive plant, it outcompetes many other species that used to line our roadsides and country lanes.   Species such as white dead nettle, birds foot trefoil, garlic mustard are being excluded; they need a soil that is nutrient  "poor" - with low levels of nutrients such as nitrates and phosphates.    Such soils allow a wide and diverse range of species to coexist.

The ˜disappearance" of many wild plant flowers is now well documented.     The Countryside Survey (carried out every 10 years) shows the advance of cows parsley along our roadsides.    Plantlife (the wild flower charity organisation) has produced a report about the problem - and says that nitrogen pollution is now a greater immediate danger to some habitats and our wild flowers than climate change.    Various academics, such as Dr Carly Stevens (University of Lancaster) have shown that there is a clear relationship between nitrogen deposition in an area and its species richness (or rather the lack of it).

Sadly, our wild flowers are disappearing.

* extra nitrogen and phosphate have resulted in the 'enrichment' (aka eutrophication) of many freshwater systems   and waterways    - for example,    the Norfolk Broads    [these suffered badly in the later part of the 20th century].

i agree with the need for ivy management.Ivy often causes trees to blow down due to the wind resistance of so much evergreen foliage. Is ivy growth boosted by nitrogen?

I know some will strongly disagree, but some up-to-date research would confirm that Ivy (Hedera helix) can also be responsible for loss of hedgerow and an alarming number of trees in the hedgerow; some trees and shrubs are so overgrown that they are virtually invisible and some largely dominated. Value of ivy for some wildlife is certainly recognised, but management of both woodlands and hedgerows has fallen drastically.