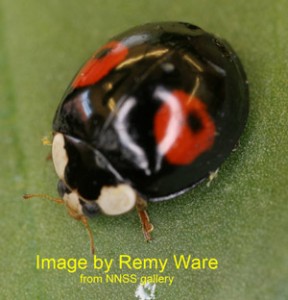 Some six years ago, there was a post about the harlequin ladybird  (Harmonium axyridis)– aka Multicoloured Asian Ladybird and the Halloween Ladybird - a ‘newcomer’ to these isles, and which might prove to be a threat to the native species.  The harlequin ladybird in an Asian species that has been used for pest control (aphids etc).  All ladybirds are beetles.  They belong to the order – Coleoptera – and are characterized by having forewings modified as hard wing covers or ELYTRA and biting mouthparts (cf. butterflies and moths).

Now some years later, research by scientists at the Centre for Ecology and Hydrology have evidence of strong link between the arrival of the harlequin ladybird and the decline in other species of ladybirds.  Seven out of the eight native british species have declined – with some now described as being ‘near the threshold of detection’; similar issues have arisen in Belgium and Switzerland where the harlequin ladybird is also present. 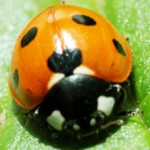 To give a specific example of how native ladybird numbers have been affected, the numbers of the two spotted ladybird (Adalia bipunctata) are estimated to have fallen by over 40% in the U.K. and by a third in Belgium.  These two ladybirds ‘share’ the habitat of deciduous trees but the harlequin is larger and outcompetes the two spotted ladybird for food, and may prey on two spot larvae.  There is also some evidence that the harlequin ladybird is distasteful to birds and other animals that try to eat it.

The only ladybird unaffected by the arrival of the harlequin is the seven spotted ladybird (Coccinella septempunctata) – it is similar in size and has a slightly different habitat.

Details of how to recognize the harlequin ladybird may be found here  and there is an excellent pdf file on the identification of native U.K. species available :

The CEH is still collecting data on the spread of the harlequin ladybird, though it no longer needs ‘sightings’ from London and south-east England, East Anglia, the Midlands, Hampshire, Dorset and south Devon.

Digital photographs are the preferred method for verifying ladybird species.  There is an on line recording form

or a downloadbale Word document to submit records to

[…] will enable people to identify bat calls using a smart phone.  Also under development are apps for ladybirds, butterflies and aquatic organisms.  The use of citizen science or crowd sourcing  is that it […]