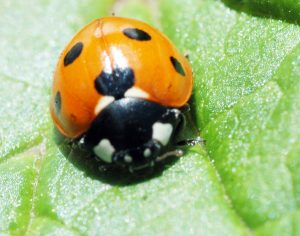 In Norfolk, a ladybird is sometimes referred to as a bishy barnabee.; this rather curious name is explored in this article in The Spectator from last year.   Ladybirds are beetles and are easy to recognise. Most have dome-shaped bodies, with an oval outline and three pairs of jointed legs.  The most common ladybirds have bright red wing cases with black spots covering their bodies.  Others are yellow with black spots, some white and brown, or even striped.  It has been estimated that there are some five thousand species of ladybird across the world, with 40+ species in the British Isles.

Their bright colour serves as a ‘do not eat me’ warning to would-be predators, apparently they have a bitter taste.  Birds such as swifts and swallows eat ladybirds, as do some spiders, frogs, wasps, and dragonflies.  When challenged, ladybirds can produce an ‘unpleasant’, yellow, oily fluid; or they may ‘play dead’.  The pine ladybird when under threat ‘clamps’ itself to the surface that it is resting on.  Bright colours are used as a defence mechanism in a number of insects.

Ladybirds themselves feed on aphids and small insects - most are voracious carnivores.  During its lifetime, a single ladybird can eat thousands of aphids - no wonder gardeners like them. 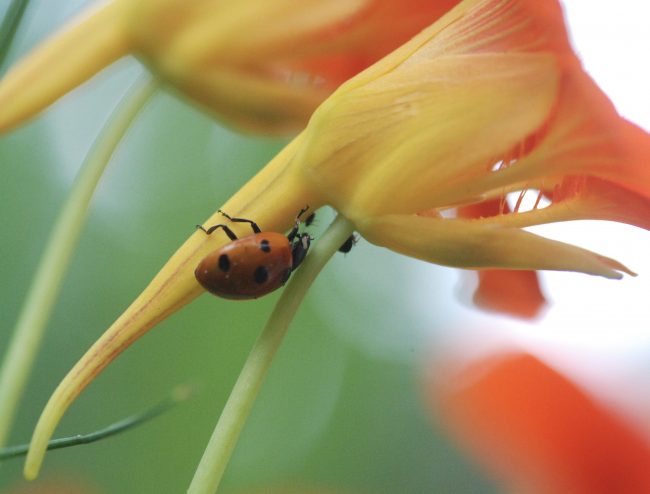 However, there are ladybirds such as the orange ladybird that are not carnivorous - instead they feed on mildews found in tree canopies of ash and sycamore.  The 22 spot ladybird (yellow with many black spots) also feeds on mildews, and may be found on hogweeds (and trees).

Like many insects, the life cycle of the ladybird has four stages: egg, larva, pupa and adult (imago).

In the winter months, adult ladybirds hibernate in cracks, crevices (of bark, sheds, buildings), under rocks and in leaf litter.   For example, the pine ladybird overwinters in the bark crevices of evergreen trees (and their leaf litter) and the same is true of the larch ladybird.  Adult ladybirds emerge in April to find a mate and begin the cycle again.

Unfortunately, several of our native species of ladybird are threatened by the arrival and spread of the Harlequin ladybird.  There is a smart phone App - European Ladybirds, which is not only an aid to identifying the various ladybird species, but also allow you to report sightings.   The CEH continues to monitor the status of our native ladybirds.