You are here: Home > Blog > Flora & Fauna > Warfare amongst the ladybirds.

Warfare amongst the ladybirds. ~ by Lewis 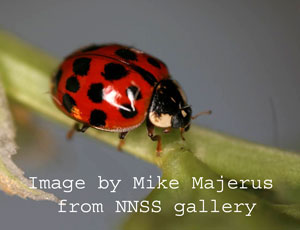 Recent research has shown that this invasive species has an impressive immune system - the body fluids of this animal contain a strong antibiotic compound (HARMONINE) and also small proteins (peptides) that have anti-microbial properties.   Consequently, they are able to fight off pathogens (disease causing bacteria and fungi) much more effectively than native species of ladybirds.   Dr Heiko Vogel of the Max Planck Institute for Chemical Ecology has found that they also have inactive microsporidia (very small fungal micro-organisms) in their body fluids (haemolymph) and eggs - so that, if they are attacked by native ladybirds, these organisms become active and kill the native ladybird species. 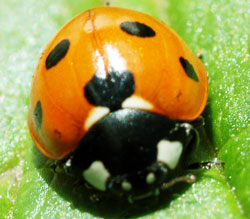 These advantages / adaptations have allowed the harlequin spread across Europe and the U.K. in recent years. Work by Dr Helen Roy (Centre for Ecology and Hydrology) has established that seven out of eight UK species of ladybird are in decline - in terms of numbers and distribution.   The two spot ladybird has suffered the most.  Work is still continuing to chart the progress of this insect across the UK and to help a new App has been produced.

‘iRecord Ladybirds’  has been produced to help monitor the impact and spread of the invasive Harlequin.  The harlequin is quite variable in colour - which can make it difficult to identify.  However, harlequins are generally bigger than native ladybirds - any ladybird that is less than 1/5th inch (5mm) is not a harlequin; most harlequins are orange, with 15 - 21 black spots.  The iRecord ladybirds app comes with photos of our native species, and descriptions to enable one to distinguish between these and the invasive harlequin.   It is hoped that with the new app more people will be able to contribute to the UK Ladybird Survey.

When will we ever learn?