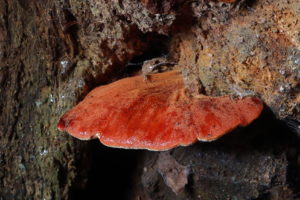 Beefsteak Fungus. The very name seems to suggest a choice edible, something meaty, tasty and substantial. The Latin name, Fistulina hepatica, sounds more like a medical condition. The hepatica part means ‘liver’, for this is what the fruiting bodies look like: dark reddish-brown, wedge- or tongue-shaped and weeping large droplets of a crimson exudate that looks much like blood. Slice the relatively soft flesh of this large bracket and it has the marbled appearance of a steak.

I think all but the most ardent forager would probably concur that the Beefsteak Fungus doesn’t taste remotely as good as it looks. Firm and juicy turns to wet and floppy in the pan, but if that isn’t enough of a deterrent, then the overpowering sour acetic taste will be. Like many woodland fungi, this species is best left where found to fulfil its primary function of distributing spores and providing food for more appreciative woodland denizens. 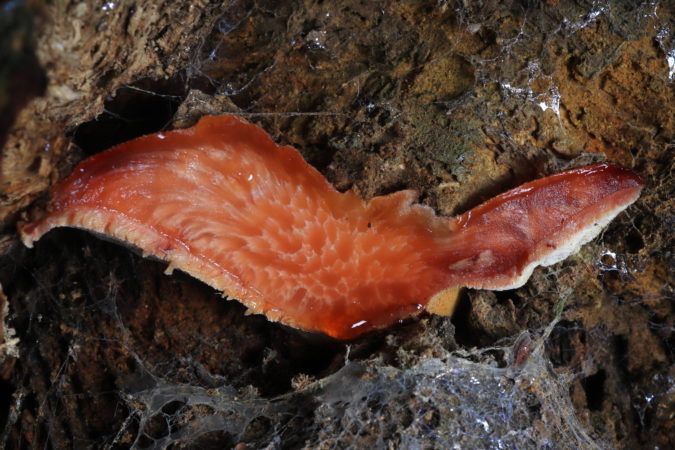 The Beefsteak Fungus should be appearing in woodlands from any time now until mid-Autumn and is pretty easy to spot. Compared with other brackets, it is soft and pliable. It reaches about 30cm in diameter and 5cm in thickness and a thick stem can often be seen attaching it to its host. Its upper side ranges from flesh-pink when young to deep chestnut red-brown when mature. However, it is the yellowish underside, which also bleeds when cut, that provides the real clincher for identification. Rather than a surface pitted with pores, the Beefsteak Fungus has a thin layer of densely grouped tubes that hang down separately from one another rather than be embedded in the pore layer itself – this is where Fistulina (“little tubes”) part of the name comes from. These characteristics make it a unique fungus in Europe, where it is the only species in the Fistulinaceae family. You certainly won’t need a microscope to look at spores or suchlike to identify it, you’ll be relieved to hear. 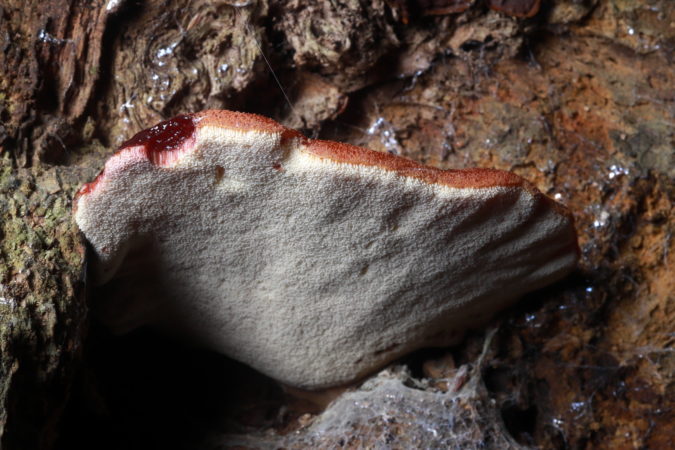 While it can be found on related trees like chestnut, the Beefsteak grows primarily on oak, usually fairly low down the trunk, and occasionally on stumps. More specifically, this brown-rotter favours older oaks, and with the UK boasting some 120 million oaks, with our 49,000 veteran or ancient oaks totalling more than all other European countries combined, we should feel particularly blessed. While the Beefsteak Fungus is a fairly common site in Britain, in several other countries it is considered rare. It is on the red list of legally protected species in Poland, to name one but one such example. 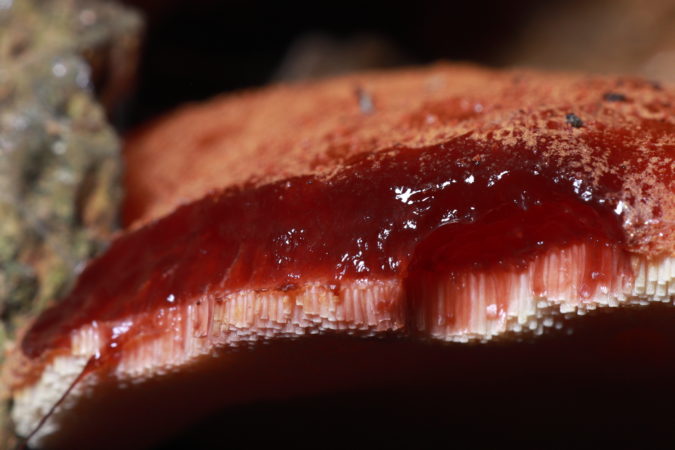 There’s a potential problem even here in the UK, however. According to the Woodland Trust, Oaks can be considered “veteran” or “notable” when they reach the age of 150 years. After reaching 400 years, they are classed as ancient, and some can go on to live up to 1000 years. It is not just tree-huggers who should be up in arms by such incidents as the recent felling by Peterborough Council of a 600-year-old oak to avoid a potential insurance claim involving two houses on an estate built around the tree just 30 years before.

Ancient oaks support an astonishing biodiversity; not just lichens, mosses and a rich array of insects and other invertebrates, but birds, mammals and of course, fungi. According to the Standing Oak Tree Fungus Survey, of which more later, oaks support over 2,300 species (this is not including all the fungi and other microbes), of which 320 are endemic to oak and a further 229 only rarely found on any other trees. More can be read on oak biodiversity on the sites of the Woodland Trust, The Ancient Oaks of England and ActionOak. 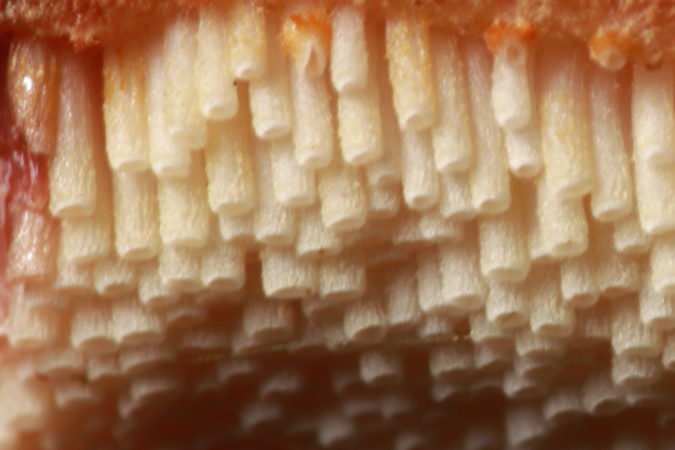 Ancient oaks support species that younger oaks can’t, and so Peterborough council’s announcement it would plant 100 new trees to mitigate the environmental impact caused by its destruction should be seen as the greenwash that it is. One of our big problems in the United Kingdom is that over the past century or so, we have been rather remiss in our protection of oaks, and come the inevitable loss of our oldest species, we are missing the new generations to replace them and therefore hosts for the numerous animal, plant and fungi species that depend upon them.

In relation to fungi, the Beefsteak Fungus is safe for the moment, but there’s one other species in the UK that is considerably more at risk. The Oak Polypore (Buglossoporus quercinus), a large bracket found on ancient oaks in openly grown settings, is one of only four species on the Red List of legally protected species in UK.  It is believed to be present in “350 localities in Europe (incl. suspected unrecorded localities).” It is more prevalent here than the rest of Europe however, due to such relatively safe enclaves as the Windsor Crown Estate. But host and habitat lost are the main threats to the very rare fungus which, for such sad but inevitable reasons, I have been unable to find and photograph. 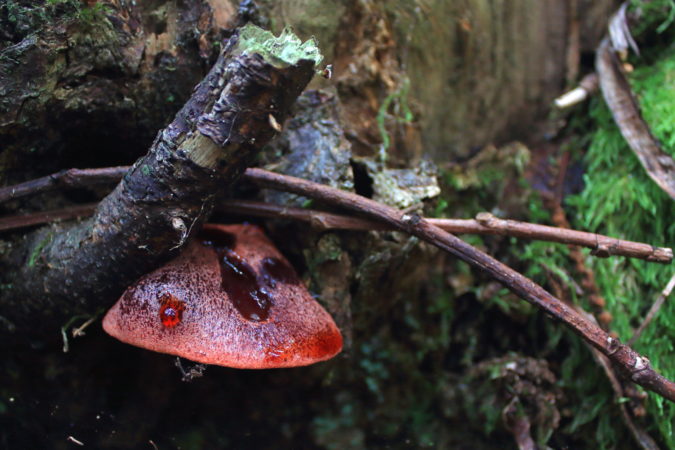 This brings me back to the Standing Oak Tree Fungus Survey, spearheaded by Richard Wright as part of a PhD research project under the Action Oak initiative aimed at mapping the fungal diversity of Britain’s oaks of and assessing “their interactions, and their effects on the life of tree”, depending on such factors as their age and location. The project started in 2020 and is intended to run until 2023.

There’s obviously a huge amount of data that needs collecting and crunching through for this, and this is where you, the Citizen Scientist, can play a role. The project openly encourages the involvement of “anyone who can tell a chicken-of-the-woods from a beefsteak” (easy – one is yellow; the other is red!), by reporting their finds on an app that can be downloaded from the project’s website here. There’s also the dedicated Standing Oak Tree Fungus Survey Facebook group that can be joined for more details and discussion. 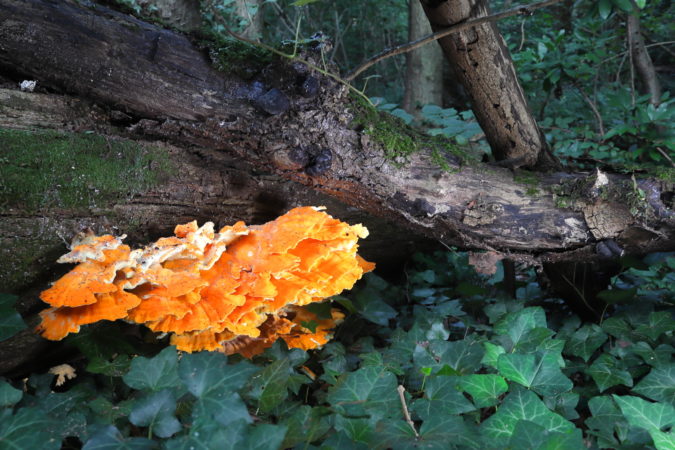 Caption: Chicken or beef? The sulphur yellow layered brackets of the Chicken-of-the-Woods.

I emphasised the importance of more people taking an active interest in fungi in my post earlier this year.  : ‘Mycophilia and Recording the Fungal Diversity of the United Kingdom’.  Mycology can be a daunting and difficult subject, but this project provides a great starting point for those who wish to dig deeper. Englands oaks need you! 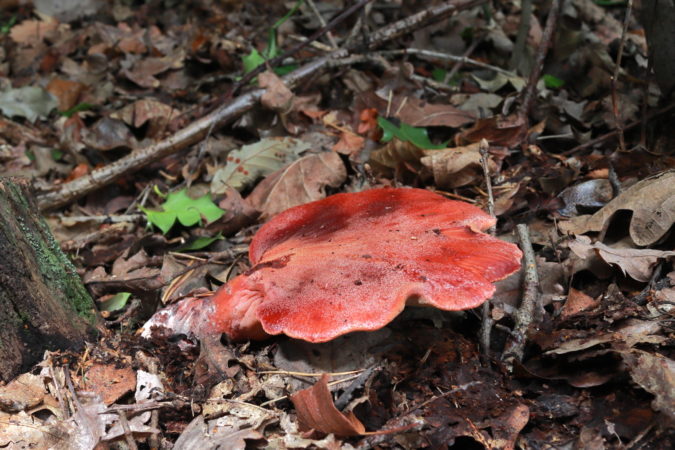