Leaf fall and litter. ~ by Chris 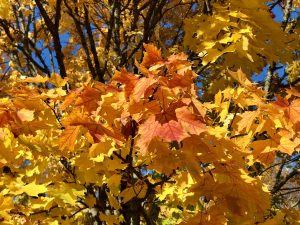 Many conifer needles will turn yellow then as they age, falling off the tree after one to several years. This change can be gradual or in some species quite rapid.  White Pines (Pinus strobus) typically retain their leaves for 2 to 3 years, whereas Scots Pines (Pinus sylvestris) usually retain their needles for three years. Larches, which are conifers (Larix sp) are somewhat unusual in that they shed their leaves every autumn.  The stress that a tree experiences through drought may result in more rapid browning and greater loss of leaves. 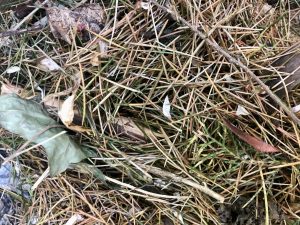 The discarded leaves accumulate on the woodland or forest floor as litter (or duff - to use the American term).  The needles of pine and other conifers are relatively slow to decompose as they are rich in phenolic compounds.  In the living plant, these chemicals often serve to protect the plant from invasion by pathogens.  Once on the forest floor, the needles can accumulate to considerable depth.  As this material accumulates, it can represent a considerable fire hazard.

In many parts of the world, fire is a natural agent in the maintenance of certain ecosystems.  For example, fire is important in the release of seeds from the cones of Lodgepole Pines (Pinus contorta), fire can also help maintain biodiversity in some coniferous ecosystems, and release nutrients back into the soil..

Fire is also a fire management technique which involves controlled burns that must be used judiciously, . Apart from the above ground damage that a fire can inflict, recent research in the U.S has found that soil heating was limited in sites that experienced fire relatively frequently.  Where there was deep litter or duff (as can be the case, at the base of mature pines) then the heating of the soil through the smouldering of the litter - can be intense and prolonged, resulting in significant damage  to the trees.