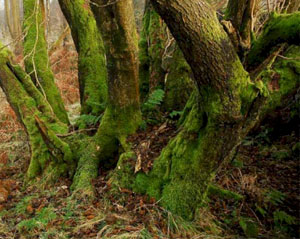 In every wood there is moss and leaf litter, and inhabiting these are multitudes of microscopic creatures. Many of these are mites (Acari).  Mites are arthropods - literally animals with pairs of jointed legs and a hard exoskeleton (cuticle).  The main groups of arthropods are

The Acari or mites (and ticks) belong with with the spiders - as arachnids. The arachnids have two main regions (or tagmata) to the body - the cephalothorax and the abdomen but these regions are difficult to distinguish in the mites - the head end is known as the gnathosoma and the posterior part as the idiosoma.  They usually (but not always) have 4 pairs of jointed legs.  The Acari probably outnumber all other arthropods is the soil / humus complex. The study of these creatures is sometimes referred to as acarology.  Of the Acari,  the largest number are Oribatida or 'moss mites', also called 'beetle mites'. They are so called, not because they infest beetles, but because being armoured with a hard exoskeleton they look like tiny beetles. The size of them varies from 0.1 - 3 mm in length and so they are not generally seen with the naked eye.  Very few people study them, but they are very important for the decomposition of material in many ecosystems. They feed on decaying organic matter or on the microbes associated with it;  they may also take algae and lichen.  They avoid the light and generally prefer damp and gloomy places, but also some will climb trees and be found on the leaves in the Spring. They respond to light, but have no eyes.

Beetle mites are not pests and do not harm humans, bite, sting or suck blood (unlikes some of the ticks). A few grassland species however, act as an intermediate host for the sheep tapeworm (Moniezia). Moss or Beetle Mites have potential as ecological indicators, and a knowledge of their ecology can be important for studies of how human activity is influencing terrestrial ecosystems.

These mites may be found in any damp shady place with moss and leaf litter, humus, rotting logs, under gorse bushes and old yew trees, even debris on the sea shore. If samples are taken and sieved, the sievings can be viewed under a stereo microscope with quite a low power. They are easy to observe as they are slow moving or very sluggish. They can 'play dead' for a long time too if they are disturbed. A warm light under the stage helps to awaken them and bring them up to the surface, but only have a thin layer of sievings in something like a small plastic container.  Below are drawings of two very different looking moss mites. 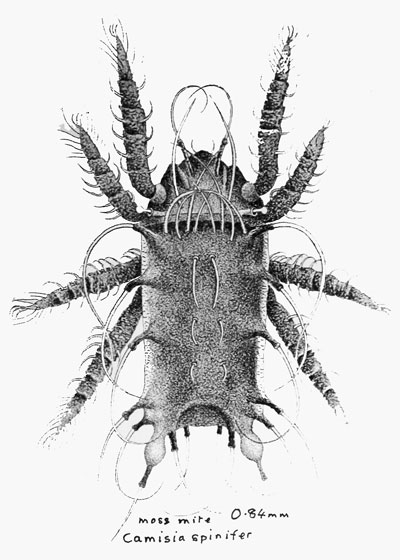 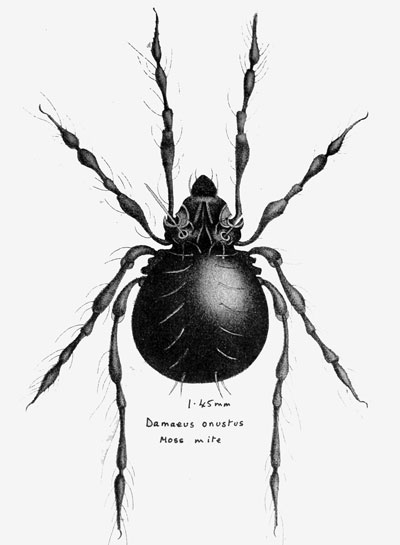 Go on, tell us about the nematodes, do. Billions per cubic metre, and many our friends of whom we know almost nothing.

I like this article, a mitey good one at that. I suspect in woodlands (notably the largely undisturbed ancient ones) there are thousands more acari and other invertebrates, than there are in any adjoining landscape. Not that, I am qualified to say so, but it seems to make sense. After all, along with gardens, they are the most biodiverse places on the planet.