Nightingales are migratory birds and fly into the U.K. in the Spring, having spent the winter in Africa. The nightingale is particularly well known for its song; (a wma file of which can be found here).  However, not everybody in the UK is likely to hear them singing.  It is not found in Scotland or Wales, and in other places its numbers have fallen quite dramatically.  It is now mainly found in the South-East, especially Kent, Sussex, Suffolk and Norfolk. A sighting is unlikely; nightingales are shy, drab brown birds who seek the dense vegetation described below.

Nightingales feed on insects and berries.  They tend to favour dense coppiced woodland or areas where hawthorn or blackthorn are vigorous, with a rich, diverse understorey.  However, such areas and vegetation are under threat due to the browsing activities of deer.  Recent work by Chas Holt, a research scientist with the BTO, has shown that the density of nightingales is some 15 times higher in deer-free areas of coppiced woodland.  His study was undertaken at Bradfield Woods in Suffolk.

The browsing of the deer depletes the understorey layer, removing insect-rich habitats and nesting sites.   Muntjac deer are amongst the worst offenders.  They browse by picking off leaves and buds from young trees and bushes, eating flowers and brambles. 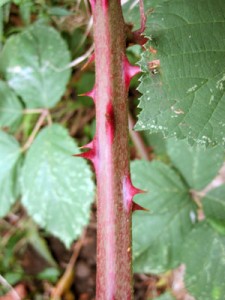 They ’enjoy’ the young shoots of hazel, sometimes taking all the new growth so that the stumps die off.  Natural England has installed electric fencing around newly coppiced wood, in places, to keep muntjac deer out.  Muntjac deer will also deplete bluebell and primrose populations.

Like other migratory birds (the spotted flycatcher, the cuckoo and the wood warbler) the nightingale is facing not only the loss of habitat here, but also problems in their over-wintering grounds and their actual migration.

The Spanish Ornithologist, Miguel Ferrer, has estimated that 20 billion birds have changed their migrating habits in the last 30 / 40 years – probably due to climate change.  Birds are having to adapt faster than when they faced the last comparable phenomenon – the Ice Age.

If you hear them this spring why not make a note below? It would be particularly interesting to know how far north and west they extend.

For the last few nights, starting on 24 June, I have heard what I believe to be an unpaired male nightingale. I live in the Holderness district of Yorkshire, which is one of the few areas north of the Humber where nightingales are still to be heard. There are a lot of coppiced woodlands, game coverts etc in the area; no (or few) Muntjacs, although there are certainly Roe Deer, which appear occasionally in my garden. It is fairly ideal nightingale country.

There was a bird singing in the old trees by my bedroom window late yesterday evening. I really thought it sounded like a nightingale, a long complicated song. I still find it hard to believe that it was a nightingale as I live in Manchester – albeit near Heaton Park which is heavily wooded. However I cannot think what other bird it might have been. It certainly wasn’t a blackbird

[…] birds such as the nightingale and willow tit also benefit from regenerating woodland and a diverse woodland floor. Diversity is […]

I live in Grantown On Spey in the Highlands of Scotland. It’s a small over 60’s residential site, withe woodland behind and many fir trees around. Eveey evening, between 9.30 pm and midnight, I have been hearing constant (beautiful) birdsong outside my window (I have seed feeders out there) but had no idea what type of bird would be singing in the pitch black at that time of night and there’d be no chance of viewing them without frightening them away. I know little really about bird types but wondered whether it was nightingales (there’s definitely more than one) so decided to Google “UK Nightingale Song” and got two short vids where they played the nightingale’s song and that is definitely the sound of the birds I’ve been hearing – without a doubt. Yet I read that there are no nightingales in Scotland.

[…] birds; for example – the lesser spotted woodpecker, the willow tit, the marsh tit and the nightingale […]

Iwas walking my dogs early evening and could hear the most beautiful bird song, which I have to say is not common which is why it became so apparent I was letting my cat in and I could still hear the birds singing it is 1.30 am and a very mild dark night although I live in the west of Scotland could it be nightingales the weather has been very strange for this time of year.

I’m in St. Austell, Cornwall. A Nightingale has visited the small wooded area (actually a Badger Set) outside our house for the last three years. Heard him for the first time this year this morning. :)

Seems unlikely from the map on the RSPB site :
http://www.rspb.org.uk/wildlife/birdguide/name/n/nightingale/index.aspx
but ………

we thought we saw a nightingale on our tv ariel but we live in the heart of cheshire. We identified it with binoculars, but before we could photograph it it flew away. Is it possible as we have read they dont migrate this far north ?

We used to have nightingales in our woodland, but a lack of coppicing and understory has let to their departure. Many people are coppicing again in the area and we hope to get them back!