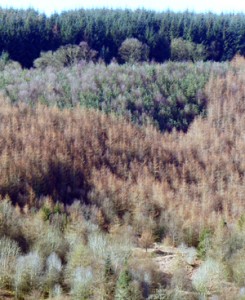 Most regard woodlands as a beautiful and important part of our countryside, and feel that they can exert a profound and positive influence on our emotional state.    Time spent wandering through the woods can have a relaxing and calming effect. Woodland only forms a small percentage of our countryside (about 13%), and some of that is dominated by conifers planted in the post-war period for timber production; however, the area covered by broad leaved trees is now increasing.    Despite this, our woodlands do harbour a wonderful variety of wildlife (think of the red squirrel, the nightingale, the dormouse) but there is concern that woodland plants and animals face a number of threats - many species are in decline.   Why is this ?

Firstly, many woodlands are no longer actively managed, for example, through coppicing.      Consequently, the canopy can become more complete, that is denser - the woodland becomes generally darker and many species that rely on the ‘younger‘ stages of woodland growth lose their habitat / niche. 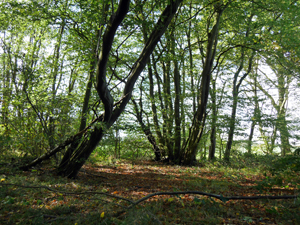 Certain woodland plant species need the open spaces of glades, rides, newly coppiced areas - which fill with light and sunshine, for their seeds to germinate and grow to maturity.      Snakes such as the adder need ‘open areas’  in which to bask, to warm up in the sun.    An area that is regularly coppiced will see an increase in light intensity (at the ground / herb layer) and a ˜flush of woodland flowers in the immediate post-coppicing period.    Coupled with this, there is often a population boom of butterflies that depend on these plants for nectar, places to lay eggs etc. (see previous blog).

Similarly, birds such as the nightingale

and willow tit also benefit from regenerating woodland and a diverse woodland floor. Diversity is important in a woodland, so mature areas favour bats amongst other species and veteran trees are home to many species of invertebrate (insects, spiders, millipedes, centipedes etc), not to mention lichens and fungi.  Diversity in the structure of the woodland leads to biodiversity.

Woodlands have also been subject to introduced species, for example, muntjac and sika deer.    These and the expanding populations of native (red and roe) deer mean that many woodlands are subject to over-grazing.    Deer browse selectively on the herb layer and on young trees and shrubs.    They also exhibit territorial behaviour,  rubbing their antlers on trees and shrubs causing damage.      These activities result in the degradation of woodland structure / diversity.    Woodlands have been subject to many introduced species - notably disease-causing organisms (and their vectors). 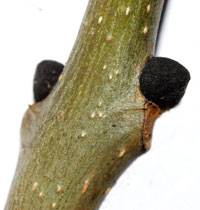 Some of these have had dramatic, long term effects; for example, dutch elm disease.    This disease wiped out nearly all of the English Elm population (and affected many associated insects e.g. the white hairstreak butterfly, whose numbers declined by some 70%).      More recently, Ash (Chalara) dieback has affected woodlands and hedgerows.    Ash is the third most common tree in broadleaved woodland and provides nesting sites for birds, roosting sites for bats, and places for epiphytic mosses and lichens to grow.

Other threats to woodland wildlife include eutrophication - the pollution of the environment with nitrogen compounds (nitrates etc).      This  'enrichment' of the environment with nitrogen (and phosphate) compounds encourages botanical thugs such as brambles and nettles - which can outcompete many plants of the herb layer [the diversity of which is dependent on a low nutrient status to the soil].

Climate change is also on the agenda as it affects the length of the growing season,  the synchronisation of flowering and the emergence / activity of pollinating insects; not to mention the impact of HS2 (in some areas). 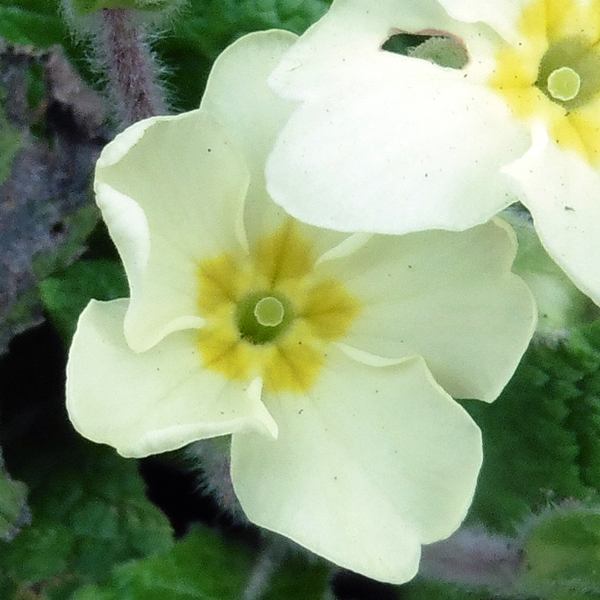 Thank you for your helpful and informative comments.

Several of the woodlands’ blogs have spoken of the need for plants and seeds of local provenance, also about encouraging not only biodiversity but also resilience / robustness in the light of climate change, nitrate / phosphate pollution and extreme weather events etc.

The blog tries to include articles about woodland activities, book reviews, community based activities and also information from recent scientific articles / papers – though these can be difficult to access sometimes (Athens login or similar required); we have been fortunate on occasion to add articles like that of Professor Goulson on bees.[https://www.woodlands.co.uk/blog/woodland-economics/help-save-our-bumblebees/]

It is true that some species require the ecological conditions created through management, such as coppicing. However, this is not the complete story. There are those species that can only find a niche under fuller canopies and in undisturbed ground.

Current views are changing and traditional practices are under review. Some flora associated with ancient woodlands like anemones and bluebells can be destroyed by coppicing and research is now indicating that to protect woodland habitat, micro-climates and ecology against climate change, it is vital to keep the canopy! Indeed, the article is a little one-sided: many woods are not in decline due to lack of management.

There is evidence in Warwickshire that some woods have lost species due to woodland management, whereas recent surveys in one small wood that has been unmanaged for over 80 years, have revealed an amazing variety of species including some never recorded in Warwickshire before. 120 different moths, one Red Data Book, over 30 different birds, including a Lesser Spotted Woodpecker, known to be in decline due to woodland management, over 100 different flora species, all the usual fauna, bats, etc. and an extremely rare fungus. Local experts say that this is all because this woodland has not been disturbed and is looking after itself.

Therefore, there is a good argument not only that biodiversity is valuable, but that balance should also be achieved in undertaking a diversity of management and re-wilding practices, rather than adopting one universal set of principles for all wooded areas.

It is extremely important that we enforce controls on the importation of young trees that bring in infections like Ash Dieback and with Climate Change and Extinction becoming such a serious concern, as well as planting more, we really need to try and preserve all the healthy trees we have got and stop all unnecessary felling (as carbon capture is far from instant).

Overall, it is vital to establish what is already there before taking any action that might destroy it.

In my opinion, the non native species should be culled, and also thee deer population managed.