Deer, damage and the pandemic. 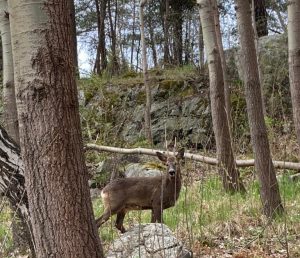 Across the UK, there are several types of deer to be found in woodlands and rural areas namely :

In recent times, the number of deer has increased and it is thought that there might be as many as two million wild deer in the UK - the highest number for many hundreds of years.  Unfortunately, deer can cause substantial damage to trees and woodlands.  Their feeding can cause a range of problems, which can include 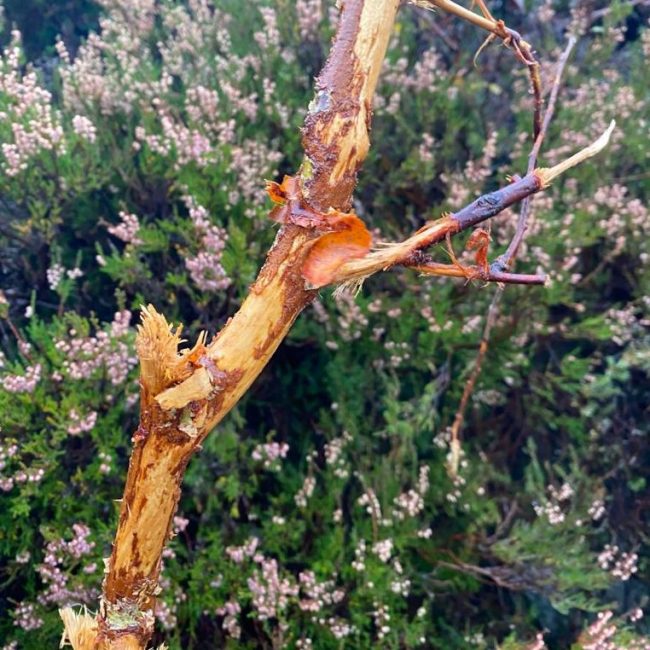 In addition to the damage associated with their browsing / eating activities, there is also the damage done by male deer who rub their heads / antlers against the trunks of younger trees.  This rubbing may be for scent marking or to remove the outer skin (velvet) present on a new set of antlers.  The antler rubbing results in cuts in the bark. 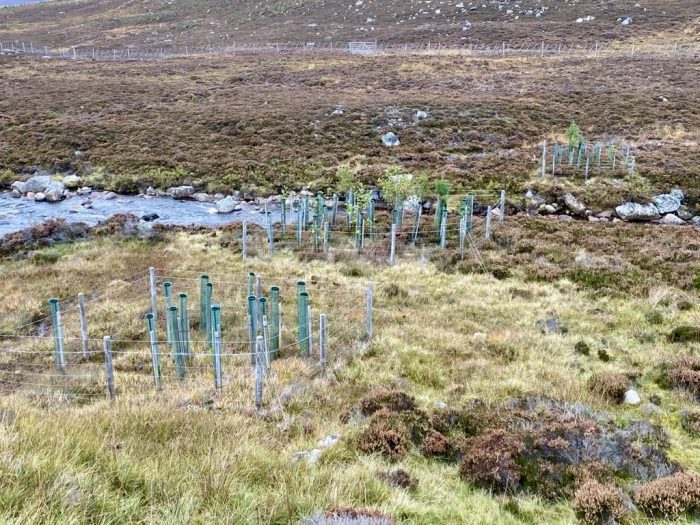 Remnants of birch woodland near Loch Muick are subject to browsing by red deer (especially in the winter), so temporary fences have been out in place to allow for regeneration and tree guards in place

Deer numbers are reduced by culling in order to supply restaurants, farm shops, and the hospitality sector with venison.   However, with the onset of the pandemic and subsequent lockdowns / restrictions  the demand for venison dropped significantly (as has price) so very few deer were culled.  Consequently, the number of deer is increasing.  Deer have probably gone through one or two breeding cycles since the first national lockdown,  and numbers are set to increase.   The increase in deer numbers not only affects the trees in a woodland but also plants of the herb and scrub layer.   The loss of plant species and aspects of the structure of the woodland means that particular microhabitats are lost so that species such as nightingales and warblers are at risk.

Without careful management of deer numbers, woodlands could become much more ‘uniform’ as deer have no natural predators (in the UK).  It is important that deer numbers are monitored  as they will do significant (most) damage to woodland in Spring as there’s not much food elsewhere for them. Young trees are particularly at risk, unless they are protected.

I agree a more diverse eco system were wolves and preditor animals that once roamed the area and was culled .(again by man ) as well as reforstation. Would be a much better idea .life is a circle remove one link and the circle/hoop does not work . See yellowstone history, or read David Suzuki .

I completely agree with the comments made by David. Just a good excuse to go and shoot these beautiful creatures who are more entitled to use these woodlands than these so called hunters who kill in the name of conservation. In the same category to those who raise pheasants just so they can blast them out of the skies to show what a jolly good shot they are!!

A few wolves would help.
They did in Yellowstone.
They reduce numbers a bit, but mostly they stop the deer all bunching in one place and munching till they have killed off all the saplings.

The article speaks about the problems that some people / areas face with the large number of deer now present through the UK. There have been articles expressing concern about the affect of deer on woodland biodiversity, for example, https://www.theguardian.com/environment/2021/jan/10/wild-deer-set-to-wreak-havoc-in-uk-woodlands-as-venison-demand-plunges.

In this Gareth Fisher comments as follows _

“Gareth Fisher, an RSPB ecologist, said excessive deer populations had a detrimental impact on the habitats of many birds, including nightingales, warblers and willow tits. “If you’ve got lots and lots of deer then you tend to get more uniform habitats where there are fewer niches for the other species,” he said. “That’s the big issue.”

Various woodland blogs have addressed the degraded nature of the landscape in the Highlands and spoke of rewinding / restoration projects, For example, https://www.woodlands.co.uk/blog/woodland-economics/the-scottish-uplands-how-to-revive-a-degraded-landscape-a-talk-by-dr-helen-armstrong/
https://www.woodlands.co.uk/blog/practical-guides/reforesting-the-uplands-drying-out-the-lowlands/

The blog tries to give a balance of perspectives, but always favours measures that support or maintain biodiversity.

I’m disappointed to see you endorsing deer culling. I personally believe these so called”management” practices are nothing but a licence for the upper class to perpetuate their savagery and mental health issues, for personal financial gain and entertainment, facilitated by their upper class law and policy maker chronies. Perhaps if the commercial forestry and land practices were more diverse, then their may not be so much browsing pressure on any new plantations, also your picture of twenty trees on a long ago ravaged for timber, burned for pheasants, cleared for sheep peatbog, has a longer far more complex story to tell than some hungry deer. These practices also keep the monopoly on half of Scotland’s land, mainly the Highlands well and truly alive. These barbaric antiquated practices should be banned completely. Where finally the land could then be put to good use for people to live and thrive on, once it’s not so lucrative to the private estates, who are not even required to fill in a tax form as they are deemed to operate at a loss, when charging £££ per day for shooting and fishing and luxury accommodation. Aye right, I say.
I’m not trying to have a go at you, I love your website, but please think twice before perpetuating the propaganda from the ruling classes and their policy making partners.
Taing,
David Ramsaidh – long served tree planter and Native Scots Pine tree seed collector.