You may have seen doom-laden stories in the press recently about “oak decline” (or “oak dieback”) -  “the mighty oak battles for survival”. The situation is probably not as serious as reported, but it is a fascinating story.

So what is “oak decline”? There isn’t a simple answer and research is ongoing. However, we do know that it seems to be caused by a number of factors acting together, for instance severe weather such as drought followed by a pest infestation. A healthy tree can cope with one of these factors, but when several occur together or concurrently it can send a tree into decline. It seems only to affect native oaks (Quercus robur and Quercus petraea) in this country although there have been instances of it on the continent.

The symptoms are a yellowing of the leaves and sparseness of foliage, followed by dying back of twigs and branches, and, in the worst cases, death of the tree. This gives the typical appearance of the tree dying from the crown downwards. However, death is quite rare and trees can recover to become a “stag’s head” oak with bare branches protruding from a leafy crown.

The other notable feature of “oak decline” is that it may be cyclical. The first episode occurred in the early 1920s, then again between 1989-94 and most recently from 1997 to date. It may just be “nature” – cycles of growth and decline. Whether climate change is playing its part in this is not clear, but warmer weather does encourage insect populations.

The most recent episode is different and has caught the attention of the newspapers because this time the decline of the tree can be unusually rapid – 4 years. However, as the Forestry Commission points out, although it is worthy of serious concern, outbreaks are isolated (and mostly limited to central and southern England) and the number of tree deaths have been small compared to the overall oak population. 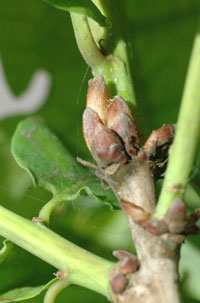 How can we help? Advice from the FC is straightforward:

What is it not? Confusingly, there is another disease of oaks called “Sudden Oak Death”. This is different from Oak Decline and is caused by a fungus, Phytophthora ramorum. Originating in the US, this fungus likes rhododendron (and viburnum) but will also attack trees, including oaks, but non-native species. Native British oaks, so far, seem to be immune. The symptoms are browning of the leaves and oozing black or red cankers with mottling of the inner bark. (Although Phytophthora quercina, which attacks fine roots, has been implicated in Oak Decline.) Sudden Oak Death is rare, but is serious and a notifiable disease. If suspected, it should be reported to DEFRA. 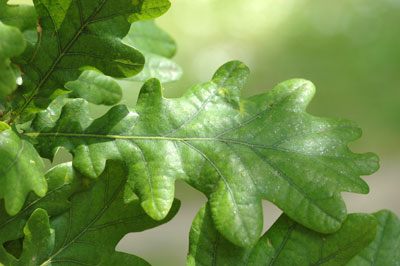 Acute Oak Decline (AOD)
This disease is demonstrating a potential threat to the future of our iconic Oak. ‘Best Practice’ guides and other useful information to growers can be accessed via http://www.forestresearch.gov.uk/oakdecline

Woodland Heritage have recently launched an appeal to raise funds for vital research into the causes of AOD and to help find a way to understand and tackle this disease. Work is currently in progress to record, take samples from stem bleeds and monitor the Agrilus beetle attacks on several sites. However, further mapping and research is necessary to try and isolate the causes.