Red Squirrels ~ by Paul B 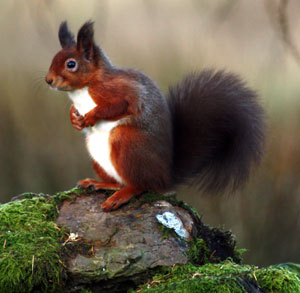 Anyone who has ever been fortunate to be able to watch red squirrels in the wild will understand the attraction to them. They are fascinating, nimble creatures, scurrying around in the treetops, making what appear to be death-defying leaps from branch to branch, and tree to tree. The best way to try and detect whether they are around or not, is to stand quietly and perfectly still and look up into the treetops.

Sometimes it is possible to catch a glimpse of one but, more often than not, if they are feeding, the sound can be heard of them chewing on pine cones, or the debris from the cones can be seen falling. Occasionally,  they can be seen rushing head first down a tree to the ground in order to bury nuts, which they will retrieve at a later time.

Unfortunately, in the UK, the red squirrels have competition, not only for their food but also their territory. The grey squirrel, which is much larger, much hardier, and breeds more successfully than the red squirrel, was introduced here from North America in the 1870’s. It became apparent, over time, that the Grey Squirrel out-competes the Red Squirrel for food. If that wasn’t enough, some Greys carry the Squirrel Pox Virus which when passed on to Reds, results in a prolonged and painful death for the Red Squirrel, usually within 14 days. Of course, if infected red squirrels happens to meet with and pass the virus onto other red squirrels,  they will suffer the same fate. The grey squirrels are unaffected by the virus.   So the way I see it is that the odds have been stacked against the Red Squirrel by mankind (through the introduction of the Grey Squirrel) and, if we wish to continue to see Reds in the UK, it is up to us to try and redress the balance a little.

This is where I come in. I am a member of a Red Squirrel Group based in North East Cumbria.  We are a group of volunteers, giving up our free time in order to try and make a difference.  Our Red Squirrel Group is typical of many similar groups throughout the UK. These have been formed by like-minded people who have decided, in the absence of any other solution, to fight for the Reds as long as they are around, and as long as Greys continue to encroach on their territory. We have Red Squirrels here in North East Cumbria but we are also right on the very forefront to where the Greys have extended their area. In some of our woodlands, the Reds have been driven out, or have been wiped out after contracting the pox virus. We act upon reported sightings of Greys, but there are also regular ‘hotspots’ where we trap as a matter of course. Having obtained permission from the relevant landowners, members of our group use live traps (these do not cause any injury to whatever is trapped), within these areas, in an attempt to trap any Greys.  Any which are trapped are subsequently humanely dispatched. It has been seen that, once this is carried out to such a degree, any Reds that may still be around, often return to the woodland. 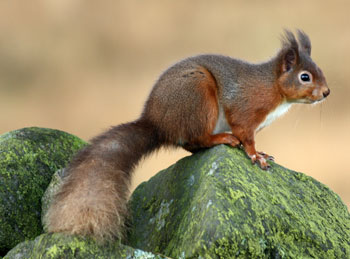 I, personally,  cover an area within a radius of approximately 3 miles from my home.  I have watched the numbers of Reds increase and spread, if Greys are kept at bay. However, trapping is an on-going process as the Greys continue their relentless advance into less densely populated territory. In other words, having cleared an area of Greys, it is only a matter of time before more of them come along. A typical day would involve me making two tours around my ‘trapping’ area, once in the morning and once in the late afternoon/evening,  to see if anything has been caught in the traps. If nothing has been caught,  I check that it is operating properly and bait the trap with whole maize.

In addition to squirrels, the traps catch other wildlife, such as stoats, polecats, small rabbits and birds; this does add a lot of interest for me - to be able to see these creatures at close quarters. If a Red is trapped, a quick check is made to make sure that it is healthy and there are no visible signs of the Squirrel Pox virus. Every creature, apart from Grey Squirrels, is released from the traps, unharmed and without any charge for the food and accommodation!

In addition to the trapping and monitoring activities, I also attend fund-raising and awareness-raising events (along with other members of the Red Squirrel group). So, as long as the advance of the Grey continues, with no alternative remedy, we carry on!

Hello:
I am very interested in buying a pair of red squirrels, but in Spain. It is difficult.
Could you tell me where I could get them in Great Britain or Gibraltar?
Thank you

Good for you, Paul – doing what needs to be done.

Grey squirrels may look cute (though not as cute as the reds) but they are introduced vermin and need to be controlled.

A powerful air rifle in good hands will produce a quick, humane despatch of a grey squirrel (kinder than it would be likely to receive left in the wild), and you can even eat it afterwards. Waste not want not!

I know which species I would prefer to witness in my patch and it’s not the introduced Grey. Certain sections of the general public seemingly can’t accept that our native species need protection and sometimes actions, precisely as mentioned above are absolutely necessary. It wasn’t many years ago, that I would have been appalled by the mere mention of such activities.

However, I now realise we can’t afford to not take action. Our ecosystems are at a tipping point right now and we cannot sit back and watch the Bees, Butterflies and Blooms lose out to outdated management practices. Where are the great keepers of our landscapes? It is at times like these, we need a whole army of wildlife carers.