Britain has two types of squirrel, but only one of them – the red squirrel – is actually native to the country. The grey squirrel was introduced into the UK about 130 years ago. There are now some 2.5 million grey squirrels in the UK, compared to 160,000 native red squirrels.

The majority of the red squirrels are now found in Scotland, Wales and North East England, with smaller populations in places like the Isle of Wight and Norfolk (Thetford Chase).  The distribution of squirrels in Ireland may be seen here .  The number of red squirrels has fallen dramatically as it has lost out in competition with the grey squirrel, in terms of young (kittens) produced; certainly this is true in deciduous broadleaved woodland and forest. This may be associated with the red squirrel not being able to digest acorns (often plentiful in such habitats). 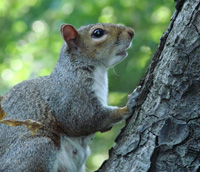 One place in the UK where the red squirrel survives in native broadleaved woodland is on the Isle of Wight; here the grey squirrel is kept at bay.

Red squirrels are at home amongst Hazel, Beech, Scots and Corsican Pine, Sweet Chestnut and Wild Cherry, where their main food is the nuts and seeds, although they will also eat flowers and shoots from trees; and even forage for mushrooms and fungi. They are most likely to experience food shortages in early summer, when the current year’s fruits and seeds are forming.

The parapox virus and the loss of woodland and forest may also have contributed to the decline of red squirrels over the last few decades. Fortunately, the red squirrel is included in the National Biodiversity Action Plan and there are a number of initiativesto help and protect local populations.

Red Squirrel week this year is 30th September to the 8th October. If you can help with sightings of red squirrel, then visit the Wildlife Trusts.

[…] Most red squirrels are now found in Scotland, Wales and north east England, with smaller populations in places like the Isle of Wight and Norfolk, according to woodlands.co.uk. […]

Thank you a lot! This will help me in my exams a lot!

[…] types of forest where red squirrels thrive has as much to do with their disappearance in England (Woodlands.co.uk presents a balanced view). Red squirrels were also hunted up until […]

thank you for all this info:D
Now i can see what i should do!!!!

very helpful thanks this will help me in my gcses. :)

Hi there. I live in Toronto, and earlier this year, my wife, Jean, and I were in Ireland where we came upon the rarely seen Red Squirrel. To us, they actually look somewhat like our American Red squirrels, but boy, do they have long ears! We were shocked to learn that U.K. and Irish Red squirrels are contracting the pox virus from Grey squirrels, and dying. We have far to many Grey squirrels here at our feeders in Toronto. But up north near Algonquin Park we have seen a few Red squirrels in the pines. We feel very lucky to have seen two Red squirrels in Ireland. We have posted some of our pictures and video of our Red squirrel sightings in Ireland, and Canada for anyone interested at: http://frametoframe.ca/photo-essay-red-grey-squirrels-canada-ireland

Through competition for food, grey squirrels usually wipe out reds within 15 years. When squirrel pox virus is present, this can happen 17 to 25 times faster, causing local extinctions within 1 year.