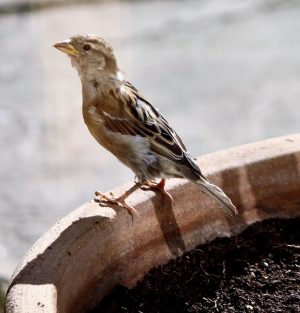 In the 1970’s, the house sparrow population of the UK was estimated at 12 million, but over the last 25 years it has fallen dramatically. So much so that the sparrow has now been added to the Red Data List (August 2002). Sparrows do not generally fly far - rarely more than 2 miles from the point where they hatch and can produce 3 or 4 clutches of eggs per year.

Many different reasons for their decline have been suggested. These include:

The availability of grains and seeds from cereals was at one point thought to be a major factor in the fall of the sparrow population. Changes in agricultural practice (e.g. more effective delivery of cereal feed, better storage of grain) were said to have reduced the amount of food available to the birds, which in turn would have affected their breeding success. However, in recent times attention has focused on the food available to young birds some 5-6 days after hatching. At this stage, they are heavily reliant on the aphids (green and black fly), or tipulids (crane flies)) which supply protein needed for growth. Young birds that experienced a more vegetarian diet were less likely to survive. Much of this recent work has been undertaken by Kate Vincent of De Montfort University in collaboration with the RSPB and English Nature.

The creation of insect friendly gardens (less concrete, gravel, decking) may help offset the further decline of the sparrow in urban areas.

British trust for Ornithology – Trends in numbers and breeding performance for UK birds.

[Thanks to Sharon for photo]

[…] By maintaining wildlife havens in towns and cities, we can help many animal species – such as sparrows, hedgehogs, thrushes, bumblebees and stag beetles. You can also help in the London Wildlife […]

[…] may well result in the decline of some urban species.  In recent years, some birds species (like the sparrow) have declined in urban / sub-urban […]

[…] By maintaining wildlife havens in towns and cities, we can help many animal species – such as sparrows, hedgehogs, thrushes, bumblebees and stag beetles. You can also help in the London Wildlife […]